Dozens of students, faculty and community members marched through campus on Friday and delivered a petition demanding Baltimore's Johns Hopkins University end its contract with Immigration and Customs Enforcement

Dozens of students, faculty and community members marched through campus on Friday and delivered a petition demanding Baltimore's Johns Hopkins University end its contract with Immigration and Customs Enforcement 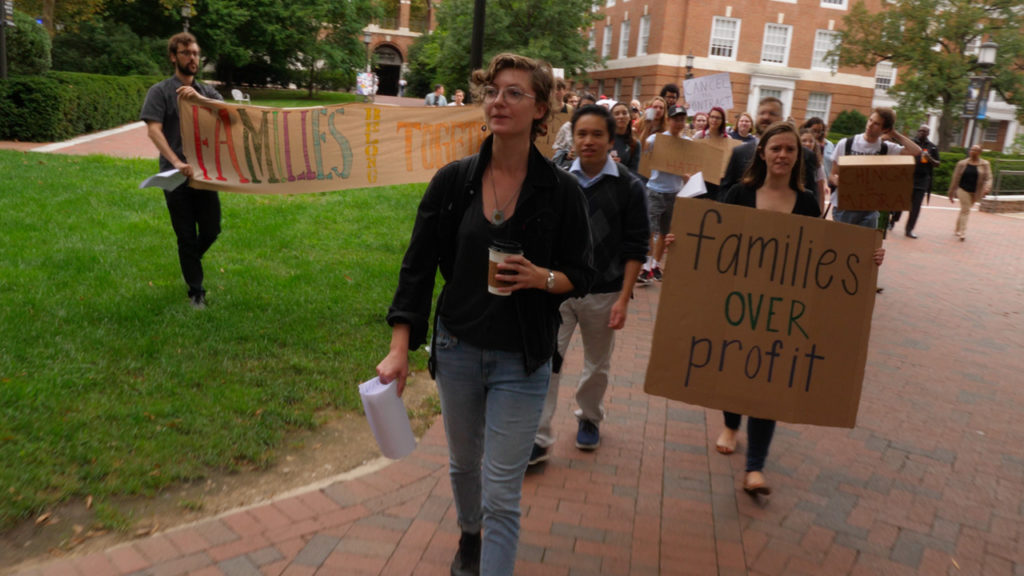 JAISAL NOOR: Dozens of students, faculty, community members, and their children demonstrated at Baltimore’s Johns Hopkins University on September 21, demanding the university end its relationship with Immigration and Customs Enforcement, or ICE. Protesters call for Hopkins to terminate millions of dollars in contracts with the controversial agency.

AIMEE POHL: We demand Johns Hopkins University drop all of its contracts with the abusive and racist Immigration and Customs Enforcement administration.

CONOR BEAN: It was publicized by a professor here, Drew Daniels, that there is an active ICE contract with the school for providing educational support, and basically training managers for operating ICE. Because of this, students on campus and organizers off campus decided that a winnable and really immediate goal would be to end the contract.

JAISAL NOOR: The Trump administration has ramped up Obama era policies of family detention and instituted zero tolerance policies at the border, separating thousands of undocumented parents from their children. Despite a court order to reunite those families, hundreds remain separated. Demonstrators marched in front of the administration building where they made a series of demands.

JOANNA BEHRMAN: We’re hoping for an immediate statement by the university that they are going to drop the contract, and a promise that they will not commit to any other contract with ICE so long as these atrocities continue to happen. We want further commitment from them that they will make this campus an inclusive and safe place for students and workers of color. And as we’ve seen with Tamsyn Mahoney-Steel, We also need commitment from them that they are going to do more to help our international students, teachers, workers at the university.

JOANNA BEHRMAN: Hopkins’ proposal for the private police force shows that lack of protection continues, and is evident in many ways. So, really, this is all part and parcel of Johns Hopkins’ legacy, and continuing practices of being a white supremacist institution in Baltimore as a community, and also being extremely unwelcoming to students and workers of color.

JAISAL NOOR: Hopkins declined to give us an interview, instead sending us a statement saying they, quote, seriously the questions raised in the petition and welcome the debate such issues should engender.

But Hopkins faculty and students said they would only be satisfied by Hopkins immediately cutting its ties with ice.

CHRISTY THORNTON: I think that Johns Hopkins has a real chance to have some moral leadership here on this issue. And the way that they’ve been dragging their feet about these contracts with ICE, the argument that, you know, nobody was paying attention to these contracts before, so why not just continue them, I find to be a really disingenuous argument. And I think that the administration here has a real chance to really stand up for its students, its faculty, people in the immigrant community here in Baltimore. I think Hopkins takes a leadership role on so many issues, and not taking one on this is a real shame.

JAISAL NOOR: Over the past year, thousands have taken part in protests against Trump administration immigration policies.

CHRISTY THORNTON: We’re seeing now are coming from places in Central America, especially Guatemala, El Salvador, Honduras. Places that have long histories of intervention and terrible policies by the U.S. government. And so the destabilization that the United States perpetrated in these countries going back to the 1980s, in some cases all the way back to the 1950s, really makes it so that there is a moral obligation here between what our government has done and why these countries are so dangerous; why families are fleeing gang violence and narco terror in these places. Those things have roots in policies that the United States government has put in place over decades. And so now closing our doors to the people who are the victims of those policies is just unconscionable.