Prosecutor Refuses to Try Pot Cases, But Police Pledge to Continue to Arrest 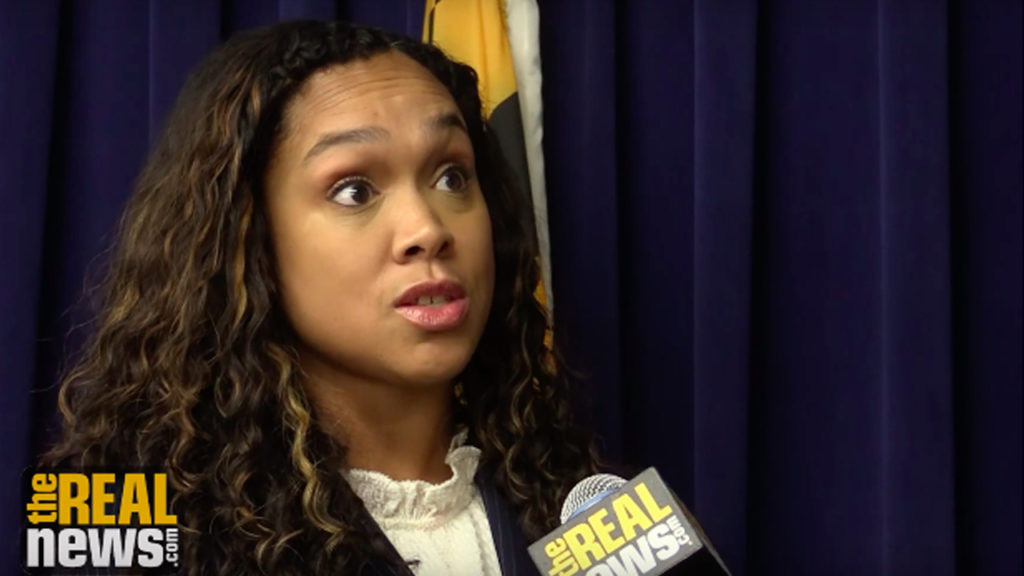 TAYA GRAHAM: This is Taya Graham, reporting for The Real News Network in Baltimore City, Maryland.

The State’s Attorney has thrown down the gauntlet, and refuses to prosecute any marijuana possession in Baltimore City, despite the fact that the police commissioner will continue to make arrests.

Baltimore, like many cities across the country, has a troubled history with mass arrests for marijuana. Recently, Baltimore journalist Brandon Soderberg revealed that even after the state of Maryland decriminalized marijuana, arrests for pot possession disproportionately impacted African Americans.

BRANDON SODERBERG: 6 percent of people with misdemeanor cannabis charges in Baltimore are black. So that’s most of them. This adds up to, to be clear, about 1,500 arrests over those three years. I stress that as, like, that’s very important. 1,500 people in jail matters. But the larger decriminalization, that’s absolutely reduced arrests. But we were really shocked to see that the disparity, the racial disparities, haven’t gone away.

TAYA GRAHAM: And a report by the ACLU estimated that the ostensibly liberal state spent $100 million in 2010 arresting people for possession of small amounts of marijuana.

MARILYN MOSBY: As an office, I’ve instructed my attorneys that we will no longer be prosecuting the possession of marijuana, regardless of weight, and regardless of criminal history.

TAYA GRAHAM: Which is why Baltimore State’s Attorney Marilyn Mosby has decided to do something about it. This week she announced her office would no longer prosecute arrests for marijuana possession–a sweeping policy change that would apply to possession of unlimited amounts.

MARILYN MOSBY: We are going to continue to proceed upon possession with intent to distribute and distribution charges if there is an articulation of evidence which would indicate some sort of indicia of distribution.

TAYA GRAHAM: And aligns Mosby with progressive prosecutors across the country who have made similar commitments to not prosecute marijuana crimes. Mosby cited the same statistics, that marijuana arrests target people of color.

One of the reasons why we came to the conclusion that we were ultimately not going to prosecute possession of marijuana is because of the statistics and the disparate sort of enforcement of these laws on communities of color, and not the disparate use. The statistics, the data shows that the use among black and white people are the same. Yet in the city of Baltimore it has been an extreme problem, and for a very long time. In 2010 the ACLU put out a report in which, you know, nationally, if you are a black person, you were four times more likely to be arrested for mere possession of marijuana. In the city of Baltimore you were six times more likely to be arrested for possession of marijuana.

But surprisingly, even since the decriminalization of marijuana in October of 2014, there still is this disparate sort of enforcement. And so, you know, just recently the ACLU put out another report, in which now, if you have–legally, if you have less than 10 grams of marijuana, you are given a civil citation. Well, the Baltimore Police Department in 2015 issued citations to about–89 percent of those citations that they issued were to black people. In 2016, 94 percent. In 2017, 95 percent. And the most striking statistic that I think is relevant is that out of the citywide citations that they were issuing, the one police district, out of all nine, that they focused–42 percent of those those citations that were issued came out of Western District. This is Penn North. This is Sandtown Winchester. So as a community we should be asking, this is one of–95 percent of the population in West Baltimore is black.

TAYA GRAHAM: And she also discussed what she believes is a waste of resources prosecuting cases which have limited impact on violent crime.

TAYA GRAHAM: She also responded to a statement from Police Commissioner Gary Tuggle, a former DEA agent who said the department will continue to arrest people for marijuana possession. We asked Mosby to respond.

MARILYN MOSBY: I mean, the Commissioner is well within his right to say that he’s going to have his officers continue to arrest people if he feels that he has the manpower and wants to allow his manpower to go towards the possession of marijuana cases. When you look at a city like Baltimore, where in 2017 we had 343 homicides and a 31 percent clearance rate, last year 316 homicides and a 26 percent clearance rate, I’m saying as law enforcement we need to reprioritize. I’m not going to utilize my limited resources in order to prosecute possession of marijuana.

STEPHEN TABELING: You know, what most people don’t understand is even a user is a potential dealer, because they will sell to buy for themselves. So what’s going to happen? Federally it still violates the law. It’s still on the danger list. So what happens between us and the federal authorities?

TAYA GRAHAM: For him, marijuana is a gateway drug–a notion that Mosby dismisses. For her, the war on drugs has been destructive and ineffective, which is why she says she will be seeking to vacate over 5000 convictions for people convicted of possession in the past.

MARILYN MOSBY: Last but certainly not least, we move to vacate the convictions of approximately 5,000 individuals who have been saddled with possession of marijuana convictions. And the reason why we did this is because–this is not a decision that I came to lightly. We did a lot of research and best practices. We’ve studied best practices across the country. And what we ultimately concluded is that there’s absolutely no public safety value to prosecuting possession of marijuana cases. Not only is there no public safety value, but it’s had a disproportionate impact on communities of color.

TAYA GRAHAM: It’s a move that would require help from the state legislature in Annapolis. In the past, efforts to do so have fallen flat, and the legislators we contacted said there were no plans to do so this year. But Mosby says she will continue to push for legalization to reform the system, and also focus on the actual causes of violence, which she says can be addressed by fixing inequity as well as meting out punishment.