The plan to build a giant hydroelectric dam on the Nile River is a cornerstone in Ethiopia’s economic development strategy, but is fiercely opposed by President Abdel Fatah Al-Sisi in Egypt.

The plan to build a giant hydroelectric dam on the Nile River is a cornerstone in Ethiopia’s economic development strategy, but is fiercely opposed by President Abdel Fatah Al-Sisi in Egypt. 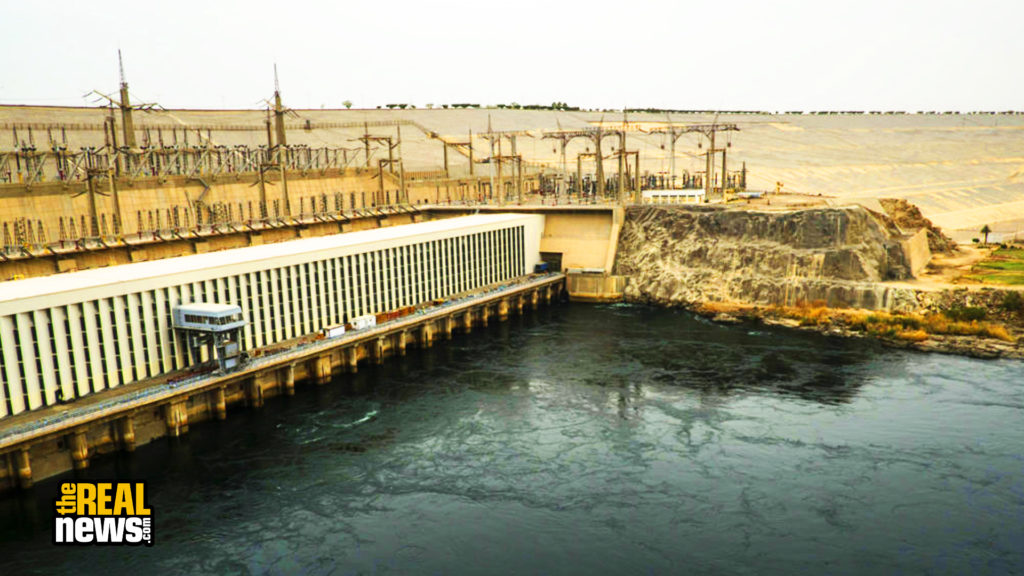 Mike Pompeo: Our mission set is not to impose a solution on this, but rather to get the three countries to come together around a solution that each of them acknowledges works for the concerns of all three nations. We have been heartened in the context of those conversations to watch each of those countries recognize the needs and concerns of the other two countries. It’s been a very professional discussion.

Kim Brown: Welcome to The Real News, I’m Kim Brown. That was US Secretary of state Mike Pompeo on Tuesday, May 12th talking about the Grand Ethiopian Renaissance Dam, a project dam the Blue Nile. Now on that very day, Ethiopian Prime Minister, Abiy Ahmed proposed to Sudan to sign an agreement to start filling the dam in July of this year. But Sudan’s Prime Minister, Abdalla Hamdok, refused to sign. He said that a partial agreement that excludes Egypt is a bad idea and insisted that the negotiations about the dam should also include environmental implications.

Now Egypt, especially under President Abdel Fattah el-Sisi, has been staunchly opposed to the dam from the very beginning, even threatened to go to war over it, fearing that the dam would reduce the amount of water that reaches Egypt through the Nile River and potentially cause an agricultural disaster. Joining us today to discuss this is [Khalid Ahmed 00:01:21], he teaches political science at the African Studies Department at the University of Toronto. He worked at the United Nations in Sudan in 2007. He joins us today from Toronto. Khalid, thank you so much for being here.

Khalid Ahmed: Thanks for the invitation.

Kim Brown: So let’s remind our viewers that Ethiopian Prime Minister Abiy Ahmed won the Nobel Peace Prize in 2019 for his efforts to bring peace to East Africa, but his attempt to sign a partial agreement with Sudan and exclude Egypt regarding this dam project seems like a rather aggressive move. So what is your interpretation about the latest actions here?

Khalid Ahmed: Well, let’s put this into a perspective, a historical and a contemporary perspective. Africa in general, and the world actually, in general, is in dire need of energy and water resources. And Africa is no exception. It is said that by United Nation report that South Korea, on its own, produces more electricity than an entire African continent. And that goes to tell you how challenging it is in Africa to really have and maintain resources of water and electricity. And this is what this dam is exactly.

Now, Egypt is the third largest populous country. There’s a 102 million people and Ethiopia is the second largest populous country in Africa with 115 million people. Now they rely heavily on the water, especially Egypt. It relies over 90% of the river water for all its water consumption in Egypt. So for it, the river Nile is a life and death situation. On the other hand, for the Ethiopians, it is an matter of national pride that they’re finally doing something good for the country because even though Egyptians use it, over 90% of its water from the Nile, 87% of the Nile water comes from Ethiopia.

So the Ethiopians want to make sure that they utilize this water for their own economic and social benefits. One of the things that the Ethiopians, for example, need is electricity. Out of the 115 million Ethiopian, 78 million does not have electricity in Ethiopia. And that’s a huge percentage. Now the dam is supposed to produce water and electricity, electricity that’s even beyond Ethiopia’s need. And Ethiopia is planning to sell it to neighboring countries. It’s going to be the largest dam in Africa once its complete, and the most powerful one as well.

Egypt is really worried about the effect of the dam on its own share of water, and that is why they are having a very aggressive attitude towards Ethiopia, trying to make sure this dam is not built at the expense of the Egyptian people. However, the historical part of this, and the one that would explain why Egypt speaks with such authority on the Nile and intervenes in such dams, is the 1929 agreement that the British has signed with the Egyptians allowing them a veto right over all construction of dams on the river Nile.

Now, it also guaranteed that they will continue to have their share of water from the Nile and nothing is going to interrupt that. Now Ethiopia was not part of that deal and it wasn’t a signatory to it. And that’s where most of the problem comes from, that 11 countries, if not all the 11 countries in the Nile basin, believe that this agreement is unfair to them and that it creates more problems than solutions.

Kim Brown: So why do you think Prime Minister Abdalla Hamdok refused to sign a bilateral agreement with Ethiopia?

Khalid Ahmed: That’s a good question, because to understand it, we have to go back a little bit in history and realize, or not too long ago in history actually, and recap some of the negotiation processes that took place between the three countries. Particularly in the United States where the Treasury Department in Washington has reached a partial agreement back in February with Sudan, with the absence of Ethiopia, but the presence of Sudan and Egypt. And that agreement, partial agreement, was initialed by Egypt but Sudan refused to, at the time, to initial that agreement because of the absence of Ethiopia.

In other words, Sudan maintains that it is very important to have the three countries initial and sign and reach a conclusion to this issue. It’s never going to be resolved by only having two countries out of the three reaching partial and separate agreements. And the same thing happened on May 13th when the Ethiopians support Sudan and ask them to sign a partial agreement without the presence of Egypt this time. Sudan also refused to do that. The reason for that is Sudan is trying to make sure that this agreement is long lasting and it embodies durable mechanisms in it in order to prevent any future problems that could come out of it, if not all three have agreed to its mandates and provisions.

But what also Sudan is want to make sure is that, it wants to make sure that all the technical aspects of the agreement has been maintained and discussed thoroughly before the dam starts being filled in July. Particularly, they’re looking at mechanisms such as the data sharing, the safety of the dam, mechanisms for dispute resolution and so forth. And Sudan is trying to make sure that all three countries get to a conclusion and get to a better idea and a better agreement on how to go about this dam and how to benefit the most equitably between all three of them.

Kim Brown: Do you think the prime minister is promoting values of solidarity with Egypt and also concerns about the environment? Or is he more worried about trying to avoid a war with Egypt?

Khalid Ahmed: Okay, that’s a good question. When Sudan refused the initial agreement back in February, it was accused of taking sides … That it was taking side with Ethiopia against Egypt. And now, again, when Ethiopia approach Sudan for a side agreement, a partial agreement without Egypt and it refused, it was also accused that it might be taking side or solidarity with Egyptians. However, that’s not really what Sudan is trying to do. What Sudan is really trying to do is try to mediate an agreement between the three countries to reach a conclusive one that would actually guarantee that all aspects of the dam have been discussed thoroughly and agreed upon by all three countries.

For example, as I mentioned earlier, the data sharing and the mechanisms, and also, more importantly, the environmental and social implications of the dam. That needs to be clearly studied or agreed upon before July, before the rainy season starts in July, and before the filling up of the dam starts. Ethiopia, on the hand, believes that these are issues that shouldn’t be a precondition to signing the agreement and they should be dealt with at a latter time.

Kim Brown: In your opinion, or in your estimation, are there any non-African state players or corporate players that are, perhaps, meddling or interfering or jockeying for position in regards to interest as it relates to this project?

Khalid Ahmed: Well, yes and no. On the one hand, you will have all the 11 countries on the Nile basin, and these countries has historically been demanding the change to the Egypt [inaudible 00:09:41] over the Nile and Nile resources, and the amount of share that it has. And they have reached, in 2010, a cooperative framework agreement. Six of them actually reached an agreement that Egypt refused to sign because Egypt thought that it would diminish its veto right and its control over the Nile.

And they have been demanding an equitable share distribution of water between all these countries, because as I mentioned in the beginning of my conversation today, that water and energy resources are the most sought after in Africa. And they’re much needed for sustainable development projects. And if the Nile River doesn’t come to [inaudible 00:10:24], all 11, not just Egypt, Sudan and Ethiopia, I think we will see a lot of problems in the future arising again. So I think you’re right, it’s not just between the three countries, but it is between all the 11 countries that share the Nile.

Kim Brown: Well, this is an incredibly fascinating topic. We know that the Nile provides so much water and resources to literally hundreds of millions of people on the African continent.

Khalid Ahmed: Yes, you’re right. And in fact, 280 million people rely on the river Nile, which is the longest in Africa and the second longest in the world. That means the river Nile actually is utilized and used by 280 million Africans who make up a quarter of the African population. And that’s a large number and that’s definitely a huge issue that’s going to need to be resolved in the near future.

Kim Brown: It’s so incredibly important that we are keeping tabs on what’s going on with this extremely valuable resource for the African continent. We’ve been speaking today with Khalid Ahmed, he is a professor. He teaches political science at the African Studies Department at the University of Toronto. He worked at the United Nations in Sudan in 2007. He’s been joining us today from Canada. Khalid, we appreciate your time today as always. Thank you.

Khalid Ahmed: Thank you for having me.