Project Censored: All the News the Establishment Media Saw Fit Not to Print (Pt 2/2)

Project Censored: All the News the Establishment Media Saw Fit not to Print 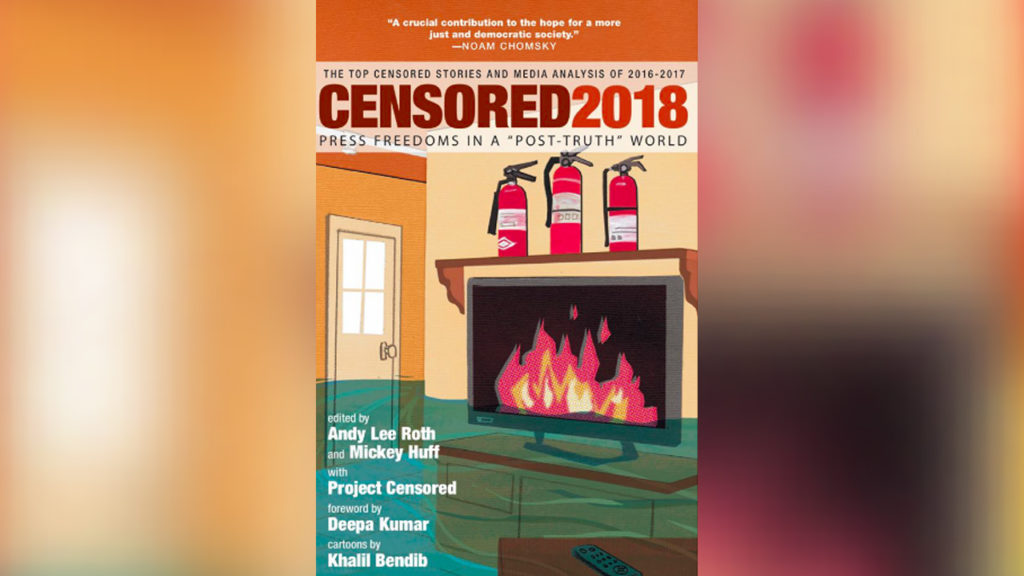 MARC STEINER: Welcome to The Real News. I’m Marc Steiner. Great to have you with us, as always.

This is Part 2 of my conversation with Mickey Huff, who is currently the director of Project Censored. And they’ve been putting out this book for 10 years now or so, I think. Censored 2019. This is the cover of the book. And we’re going to now talk about some of the stories in this book with Mickey. Mickey, I’m glad you could stay with us for a little bit longer.

So let’s leap into this. I want to begin with a story I think that America needs to hear, because I think I saw it in print a little bit here, a little bit there. But you don’t really see it that much. And this is the piece I call COINTELPRO Redux, about the FBI going after Black Lives Matter as extremists. Talk a bit about what was not covered, and what the story was.

MICKEY HUFF: Absolutely. I mean, this is a very important story. Of course, it’s an historic story. I’m with you. I call this COINTELPRO Redux. It just completely smacks of the FBI campaigns against the Black Panthers 50 years ago in Oakland. These were stories in foreign policy, and of course studies from the Southern Poverty Law Center, and Democracy Now covered this; FBI racially profiling what they call black identity extremists. In 2018, the FBI is actually using terms like ‘black identity extremists.’ It’s as if it’s Marcus Garvey all over again in the 1920s somehow.

So the fact that this is happening in the United States probably shouldn’t surprise us, those with memories. In The United States of Amnesia, as Gore Vidal would quip. People may not remember these things, but we do. And this story is very troubling for those very reasons. Not just that the African-American activists, people in Black Lives Matter, people fighting on the frontlines of social justice, fighting against police brutality, fighting against centuries now of discrimination against African-Americans. If you get a little bit too zealous about your quest for social justice and equality you can be labeled a black identity extremist and be sort of followed around or tagged by the FBI. The Southern Poverty Law Center Hatewatch staff reported about this in the past year. And they called this, quote, “a conglomeration of black nationalists, black supremacists, and black separatists, among other disaffiliated racist individuals who are anti-police, anti-white, or seeking to rectify perceived social injustice against blacks.” The real problem with that quote–there are so many problems with that quote–is that the injustices aren’t perceived, they’re real and documented. And African-Americans can’t be racist against a white dominant culture.

So over at the FBI no one’s had a sociology or ethnic studies class, apparently, and they’ve probably not read the Constitution. You well know that we can’t sit by and allow individuals who are fighting for equality and fighting to stop injustice to be targeted in this way, and be undermined. By the way, the FBI is also aware but turns a blind eye to the largest hate group and largest potential terrorist suspect group in this country, and that is white males between the ages of 18 and 30.

MARC STEINER: One of the things that strikes me–real quick, before we get to the next story–is that we’re in a period now where the FBI is being lauded as the hero to save democracy.

MICKEY HUFF: It’s up is down, black is white. It’s utterly Orwellian.

MARC STEINER: And that’s why this story I think is so important; we have to put in perspective what’s really going on in terms of going after black activists in this country; following them, and trying to undermine their movement. It’s completely ignored by the establishment press.

MICKEY HUFF: Pretty much. I mean, NBC News covered it briefly. The New York Times recently had an opinion piece where they challenged the FBI’s use of the label. But you know, other than that, this story is huge, historically. It should be on the front pages so that we can mobilize to–I mean, I hate to say reverse the policy, per se, because we know the history of the FBI with COINTELPRO. They just go underground. They just try to hush it up. We don’t need this hushed up. We need this outed. And we need this kind of policy stopped entirely, and we need to be going after the groups and the people who do pose a threat in this country, who are white males on the far right wing of the ideological spectrum. And that is a demonstrable fact.

MARC STEINER: Let’s go to another story here that you did. And one of the ones we’re looking at here is the global decline in the rule of law, and how human rights are taking–going backwards. And I think this is important for a number of reasons. One of them is that we keep seeing a lot of stories in the press and in these magazines and journals about how the world is less violent than it used to be. The world is a safer place than ever was. It’s not like it used to be in World War I, World War II era. But the reality is here this story kind of doesn’t just put a hole in that, it looks at this from a very different perspective.

MICKEY HUFF: Yeah, it really does. And for your viewers that are unaware, this was reported about in The Guardian. So there’s something called the World Justice Project. And they have the Rule of Law Index that examines legal systems around the world, and they go through great detail. By the way, your viewers can go to ProjectCensored.org and look at the top stories, and this is our number one story from the past year. It documented over 100,000 households and consulted 3,000 experts, comparing data with results from previous years. And they basically look at, well, what’s going on around the world? They look at constraints on government powers, absence of corruption, open government, regulatory enforcement, civil justice. And what they’re finding, right, and they–of course, Sam Moine at Yale University, historian, he’s quoted as saying all signs point to a crisis not just for human rights, but for the human rights movement. And so many nations are not just seeing a crackdown on human rights; they’re seeing across the spectrum crackdown on movements for human rights. And this is a violation, of course, of the very spirit, if not the letter, of the United Nations Universal Declaration of Human Rights, which is a very significant development coming out of World War II.

And so this report goes into great detail about countries across the globe where, you know, not just the United States but across Europe, across third world countries; Asia, Pacific Rim. There’s just an ongoing assault on rights and liberty. And in some countries where we’ve seen some gains, those are being raised. So it’s an important reminder that things that we have fought for are not necessarily things that are automatic or guaranteed. We need to be ever vigilant, and that’s why this was our number one story for the past year.

MICKEY HUFF: Well, the World Health Organization ruled in 2011 that cell phone radiation, WiFi radiation, was a 2B carcinogen, that it was very likely carcinogenic. And that was 2011. Mark Hertsgaard and Mark Dowie did–in my opinion, and I’ve studied this at length and read books. We’ve done radio shows on this. Several countries around the world have already banned or limited where WiFi and cell phone use can be around children, including France. Mark Hertsgaard and Mark Dowie at the Nation did a deep dive in this and it was one of the best pieces of investigative journalism on this topic that I’ve seen, how big wireless made us think that cell phones are safe. A special investigation. This is a 20-plus year concerted effort by big telecom capturing regulatory agencies to convince the public that their products were not only necessary, but that they were perfectly safe.

And so again, Ken Burrows, who works at San Francisco State University, has long covered this, accumulating evidence of ongoing wireless technology health hazards. We’ve covered this story for years. You’ll hear nearly nothing of it in the corporate media, because they get billions of dollars in advertising from related industries, to cell phones and computers and WiFi and wireless. And look, it is, literally, the air we breathe, wireless technology. But I think that the Nation article did a very responsible, very scientific, and very historical look at the problems that we face. And you know, it is very likely that WiFi radiation issues could be the tobacco and asbestos problems of the 21st century.

MICKEY HUFF: Absolutely. And there’s no such thing as mainstream media, unless it’s referring to The Real News Network. Right? It’s about us. Corporations that control the media are corporate agenda. They’re corporatist, they’re statist, they’re top-down managed news propaganda around the clock. That doesn’t mean they don’t ever report news or factual information. It means that their prime objective is to serve their corporate masters and their shareholders and other state interests, not that of the people, not the public interest.

And at Project Censored since 1976, we are interested in public interest journalism. As George Seldes said in the 20th century, journalism isn’t objective reality. It’s not reporting this side and that side and false equivalency. It’s telling the people what’s really going on based on facts and evidence so that they can be armed with the power that knowledge gives to act appropriately in a democratic republic, with what few democratic and republic-like we have within which to participate, Marc. And I think that with the cover of the book, the message of the book, fighting the fake news invasion, you know, it’s really now or never. We really need independent news outlets. Abby Martin wrote a stellar forwards for us. She does great work with the Empire Files. And again, we need people to be tuning into this kind of work and tuning off corporate media, and that is the best way to help us fight the fake news invasion.

MARC STEINER: Mickey Huff is director of Project Censored. We’re talking about the end of the year work they always do. This is Censored 2019. And Mickey, once again, tell our viewers how to get to Project Censored.

MICKEY HUFF: ProjectCensored.org. You can get all of our stories back to 1976, special articles. Our weekly public affairs radio show, now in its eighth year. We’re working on another film project. So anything you want to know about Project Censored, or if you want to get involved as an educator, or find out more on how to contribute, go to ProjectCensored.org.

MARC STEINER: Thanks again, Mickey, for joining us today here at The Real News. Great to talk with you; look forward to many more conversations over the course of the year.

MICKEY HUFF: Absolutely. Thanks so much, Marc, and thanks for The Real News Network.

MARC STEINER: Thank you all for your work, as well. And I’m Marc Steiner, here for The Real News Network. Thank you so much for being with us. Take care.