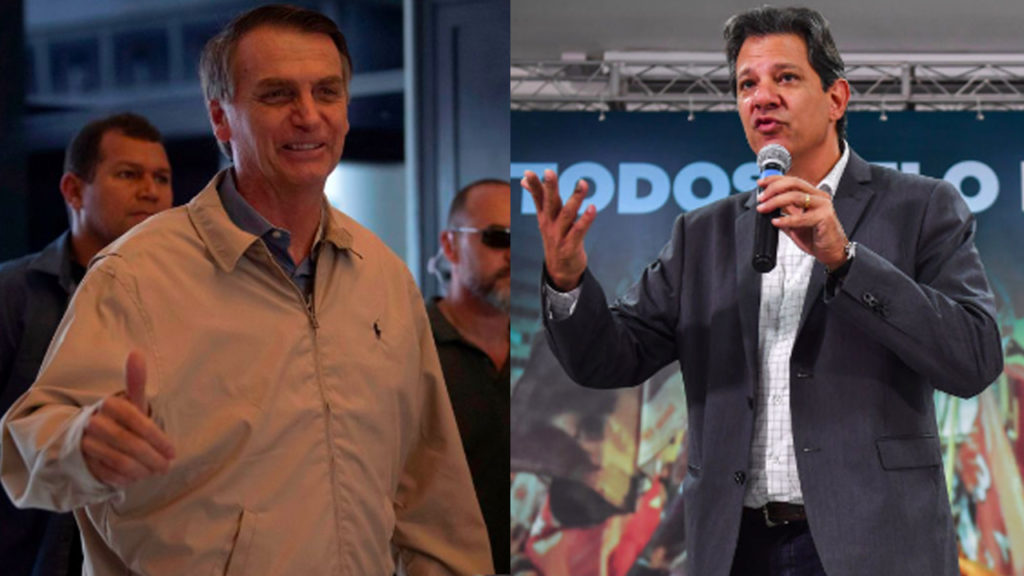 It’s a little over a week until Brazil’s historic presidential runoff election, in which far-right extremist Jair Bolsonaro could very well become Brazil’s next president. Bolsonaro is facing off against center-left candidate Fernando Haddad of the Worker’s Party. Bolsonaro had won the first round of the vote on October 7 with 46 percent of the vote toHaddad’s 29 percent. Haddad thus faces a tough uphill battle to unite forces against Bolsonaro. Here’s a clip of one of Bolsonaro’s campaign events where he was seeking support from members of the Catholic Church.

JAIR BOLSONARO: There needs to be more listening than talking. We signed a commitment that defends the family, in defense of the innocence of children in the classroom, defense of religious freedom, against abortion, and against the legalization of drugs. We do not want to get closer to strangers, or keep something that is not working anywhere in the world.

GREG WILPERT: Haddad appealed to evangelicals at a different event.

FERNANDO HADDAD: We understand that there is enough land in Brazil to go around for a boost in productivity that generates more jobs exports and income. Our program is well positioned with regard to the environment. Experts that I meet say that my rival Bolsonaro has a commitment to sustainability in the Amazon. But if he is elected this will probably not be the case, and it will be the end of the Amazon.

GREG WILPERT: Meanwhile, political violence in Brazil is becoming worse, with more than 70 attacks having taken place since early October, according to the investigative journalism group Agencia Pública. The vast majority of these attacks were perpetrated by Bolsonaro supporters, and two of the victims were killed.

Joining me now to discuss the latest in Brazil’s presidential race is Mike Fox. Mike is a freelance journalist based in Florianopolis, Brazil. Thanks for joining us again, Mike.

MIKE FOX: Thanks for having me, Greg.

GREG WILPERT: So let’s start with the increasing political violence that I mentioned. You recently attended a memorial service for one of the victims, I believe it was Moa do Catende, who was killed by a Bolsonaro supporter the first day, the first round of the vote. Tell us what happened, and what else you’re seeing and hearing with regard to the increase in political violence in Brazil.

MIKE FOX: So Moa do Catende was one of the country’s most important Capoeira masters, the Afro-Brazilian martial art. He was killed just hours after the vote ended at a bar in Salvador. Apparently there was an argument in which he defended Haddad, you know, the left-wing Worker’s Party candidate. And the Bolsonaro supporter that had been arguing with him left, came back with a knife, and stabbed him 12 times. So people woke up the day after the first round vote to the news about his death. And it’s definitely rocked the country in a lot of ways.

There’s been memorial services around the country in different areas. The one I attended was here in Florianopolis, because he was, like I said, he was really well known around the country, and he would travel. And so it was, it was a very moving performance. They performed [a foushe] which is Afro-Brazilian music and dance, and remembered him. But it’s very telling. It’s kind of a metaphor for the state of the country, is what people were talking about at that point. And like you said, there’s been 70 different attacks that we know of up until now. Obviously there’s been a lot of threats and attacks that have not been reported. The mass majority of them have been by Bolsonaro supporters against either Haddad supporters or other people, other Brazilians.

GREG WILPERT: So now opinion polls show that bolsonaro is leading with well over 50 percent support. What exactly do the latest opinion polls say, and why isn’t the political violence having more of an impact on the support for Bolsonaro?

MIKE FOX: So the latest polls, there’s two that have come out just in the last couple of days. The first one shows Bolsonaro at 59 percent, compared to Haddad’s 41 percent. The other one actually shows him higher, somewhere near 60 to 61 percent, Haddad with 39. So Bolsonaro is well ahead in the polls.

There’s several different factors that are playing in here. Bolsonaro’s support, he’s really been tying it up in a lot of different ways. He’s been playing on the anti-Worker’s Party card, and been trying to demonize them around the country. One major factor that has been huge is the amount of fake news, or misrepresented news, that has been pushed over WhatsApp and in social media. It’s been massive. And in fact, the Supreme Electoral Court came out this week and said that they were calling for the candidates to meet to discuss what was going on. And the attorney general’s office is actually investigating an industrial scheme in the production of fake news around the country. So this is fairly big.

And why is this important? Because we’re talking about a just a kind of a blitzkrieg and an onslaught of of information that is trying to tarnish Haddad, and to tarnish his candidacy. And I mention Haddad. Obviously there’s there’s also misrepresented and misreported news that comes out around the left. But the large majority of it has been from Bolsonaro supporters, or from Bolsonaro himself. Some of it has said that Haddad owns a $100,000 watch, that he owns a yellow Ferrari, that he’s been giving pornographic materials to little kids, that once children- if he’s elected- turn 4 or 5 then they’ll belong to the state, and the state will decide whether they’re going to be boys or girls. This is all playing into this kind of fear of this culture war that’s happening around Brazil.

And this is really where Bolsonaro knows where he can win. And this is why you haven’t seen him, and he hasn’t been debating. He hasn’t- he said he’s too sick. Of course, Bolsonaro was stabbed about a month and a half ago. He spent several weeks in intensive care in the hospital. But he has been doing everything he can to kind of stay out of the spotlight, although he’s been appearing in very safe spaces online and through social media. Because that- he knows that’s where he can control the framing, the messages, much the same way that Trump does. And so this is a lot of what’s playing out.

Keep in mind there is a huge amount of people around the country that, although the Worker’s Party was extremely important, particularly for the poor and the working class, millions were lifted out of poverty, they’ve been attacked and tarnished. That image has been tarnished not just for years, but for 10 years, since 2005, when the press began to talk about the corruption that was involved within the Worker’s Party.

So this is something that’s been ongoing for a long time, and Bolsonaro has just been feeding that time and time again. So the people that I’ve been speaking with, whether they’re, you know, even Bolsonaro supporters, they say they would never- even people kind of in the central portion of the political line who say no, no, we don’t want to vote for the Worker’s Party, because the Worker’s Party means a rollback to the terrible corruption and the communism that’s going to destroy the country. And so this type of discourse, this type of rhetoric is what’s really blocking people from being able to support Haddad. In fact, right now Haddad’s rejection rate is even higher than Bolsonaro’s rejection rate. And that is really what’s at play here. Of course, the evangelical key- the evangelical movement is key here, obviously. Pastors, evangelical pastors and Christians have been actively supporting Bolsonaro’s candidacy; 25 percent of the country, roughly, is evangelical here, and they are well on board with Bolsonaro, and their leaders have been really pushing his candidacy.

GREG WILPERT: Regarding Bolsonaro’s likely policies, one of the things that we saw in the clip in the introduction was that Fernando Haddad said that the experts have told him that Bolsonaro will not harm the Amazon; that he will take care of it. But that he himself, Haddad that is, doubts that that’s what’s going to happen, and that he could end up destroying the Amazon. What’s the story behind that? I mean, what is exactly the concern with regard to Bolsonaro and the Amazon?

MIKE FOX: Well, the major concern is the fact that Bolsonaro has come out saying that he wants to eliminate all reserves from the Amazon. So he’s basically said that indigenous peoples in quilombos, which are reserves of previously runaway slaves, should not have the right to their own land. And that’s talking about opening up major sections of the Amazon for development. You know, he is backed by a very large bullet, beef, and Bible caucus; a big ag caucus in Congress. And they’ve been pushing to open up, decrease environmental legislation, and open up the Amazon, increasingly open up the Amazon. We know that from 2000-2015 the fourth largest cause of deforestation across the world was opening up previous forests to cattle land, and also for soy. And those are the two major areas; those are the two major commodities that Brazil has. And those are the two areas that, you know, big, big landowners are looking to really move in and expand wherever they can.

And so we’re going to see exactly how this plays out. Obviously this would be a massive disaster for Brazil, and extremely ironic, considering that in 1992 the Earth Summit, which really got the world kickstarted on this idea about stopping global warming, that happened here in Rio de Janeiro. So the whole idea that Bolsonaro could come in and open up the, open up the Amazon for development could really be devastating not just for Brazil but for the world. We have to remember that the Amazon is one of the major sinks for greenhouse gases on the planet. And when you start to deforest, what that does is it turns that sink into a source. And so already Brazil is the sixth largest greenhouse gas emitter on the planet. Most of that is from agriculture and from oil. But the deforestation of the Amazon would only increase that exponentially. People are very concerned about what this could actually mean.

GREG WILPERT: OK. Well, we’re going to leave it there for now. Of course we’ll have you back, either in an interview or in one of your reports, for further updates leading up to the election. I was speaking to Mike Fox, freelance journalist based in Florianopolis, Brazil. Thanks again, Mike, for having joined us today.

MIKE FOX: Thanks for having me, Greg.