President Trump says his just-signed trade deal with China is unprecedented, but it's mostly symbolic and has little to nothing to offer ordinary Americans, says Jocobin's Nicole Aschoff.

President Trump says his just-signed trade deal with China is unprecedented, but it's mostly symbolic and has little to nothing to offer ordinary Americans, says Jocobin's Nicole Aschoff. 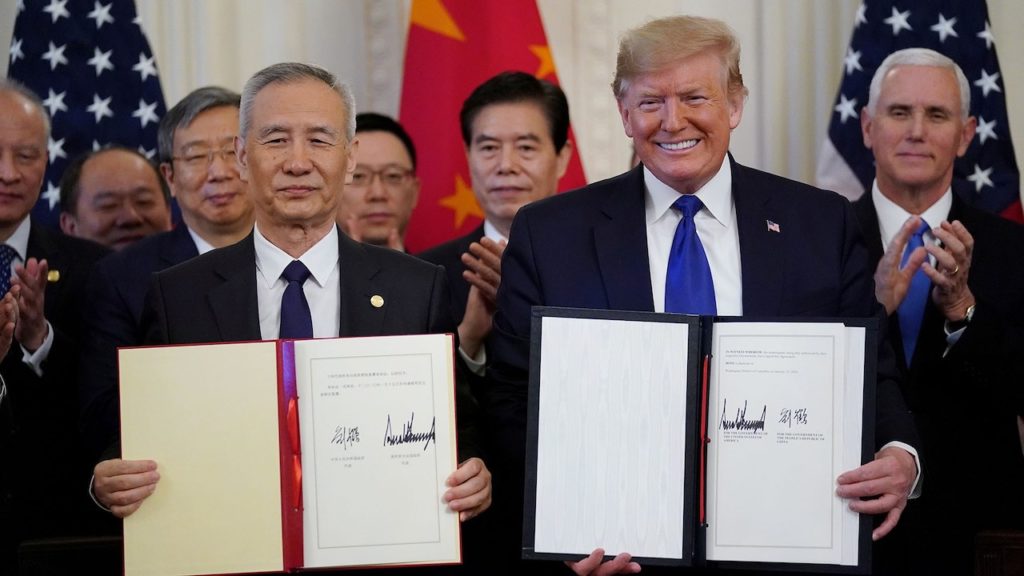 In the same week that the House of Representatives sent articles of impeachment to the Senate for his removal from office, President Trump was able to celebrate two trade-related victories. First on Wednesday, the US and China signed a phase one trade deal, which takes a step back from the trade war between the two countries. Then on Thursday, the US Senate overwhelmingly passed the US-Mexico-Canada Agreement, the USMCA–or NAFTA 2.0, as some call it. Here’s what Trump had to say on Wednesday about the trade deal with China.

DONALD TRUMP: Today we take a momentous step, one that has never been taken before with China, toward a future of fair and reciprocal trade as we signed phase one of the historic trade deal between the United States and China. Together, we are righting the wrongs of the past and delivering a future of economic justice and security for American workers, farmers and families. Our negotiations were tough, honest, open, and respectful, leading us to this really incredible breakthrough. Most people thought this could never happen, it should’ve happened 25 years ago by the way, but that’s okay.

GREG WILPERT: The phase one US-China trade deal commits China to buying an additional $200 billion worth of US goods by 2021 and helps open up China’s markets and biotechnology, beef and poultry, banking, insurance, drugs, and the energy industry. Also, it obliges China to no longer require American companies to transfer their technology as a condition of doing business there. This last point had been a major issue in the negotiations. However, US tariffs on $360 billion worth of Chinese imports remained in place. That’s 65% of Chinese imports. Also, China will maintain tariffs on 57% of US exports to China in retaliation. The Trump administration says that the US tariffs are necessary in order to ensure leverage for phase two of the trade negotiations, which might not take place until next year after the elections.

Joining me now to discuss the conclusion of the first phase of the US-China trade agreement is Nicole Aschoff. She’s a sociologist; writer and editor at Jacobin Magazine, where she has written on trade issues. Her most recent book is The Smartphone Society: Technology, Power, and Resistance in the New Gilded Age, which will be out in March with Beacon Press. Thanks for joining us, Nicole.

NICOLE ASCHOFF: Thanks for having me.

GREG WILPERT: So it seems that Trump has achieved two of his three main objectives in this trade deal; that is to reduce the US trade deficit with China and to strengthen US companies’ intellectual property rights in China. But he hasn’t really dealt with the third main issue yet, which was to reduce China’s industrial policy of subsidies. So all in all, who would you say wins and loses in this deal as it has been assigned so far?

NICOLE ASCHOFF: Well, I think if we think about the significance of this trade deal, I think people who are describing it as a pause in this larger geopolitical restructuring between the US and China are pretty accurate. I don’t see this as a dramatic shift from sort of where we’re going. And we’re really in a very different position than we were, for example, two years ago; both in terms of tariffs but also a broader kind of political rethinking of the relationship between the US and China. As far as the winners and losers, certainly when Trump was bragging about the deal and calling out his friends on Wall Street–bankers and also oil executives–as the people who would benefit, I think he made it very clear who will be benefiting most from this trade deal. And the idea that American working people are going to be the primary beneficiaries, I think is inaccurate.

GREG WILPERT: So it seems that to a large extent the deal is more symbolic than anything else. China’s commitments are not exactly binding, also. And the effort to reverse China’s industrial policies seems unlikely to succeed, considering how important they are for Chinese economic development. The economist Ha-Joon Chang once called the US policy one of quote, “Taking away the ladder,” meaning that the US once advanced its own industrial policy and development policies with a strong state intervention in the economy. But once it has succeeded and gotten ahead, it tries to force the rest of the world to adopt neoliberal policies with less state intervention. Would you say that that’s kind of an accurate description of what’s going on here?

NICOLE ASCHOFF: Absolutely. I think both the United States and the EU are very critical of China for subsidizing its own industries, but China has been incredibly successful in this regard, and over the past few decades has overtaken the US in terms of trade supremacy, and it’s now the leading or exporter to most countries in the world. So the idea that China will completely revamp its industrial policy as a result of this trade agreement or some future agreement, maybe the next phase, is pretty unlikely, in my opinion.

GREG WILPERT: Now, what would you say would a better US-China policy look like? I mean, who would benefit from it and how would it be structured?

NICOLE ASCHOFF: I think part of the challenge is that we think about trade as the primary goal, and then hope that a good trade policy will result in good jobs trickling down to American workers. And I think that we have to reconsider the order of our priorities and not expect trade policies to deliver the kinds of jobs and livelihoods that we want for regular, ordinary working people. So I think part of the challenge is rethinking the relationship of trade to the kinds of progressive economic policies that we want and not putting trade as the kind of be all, end all of where we want to go, but rather to use trade or to consider trade as a kind of supportive role rather than hoping that these kind of trickled down trade policies will result in good jobs for working people.

GREG WILPERT: Can we dig a little bit deeper on that? I mean, what kinds of things would be prioritized in a better trade deal and how would that look, as an example, once it’s implemented?

NICOLE ASCHOFF: Well, so if we want it to work within the existing kind of framework, certainly we would need to emphasize the lumen climate crisis. Right? And to actually lock in some agreements between countries to limit their emissions. And that’s certainly not on the table; either with regard to this phase one deal with China or with the recently passed USMCA. But also if we’re thinking about trade in a different way, in a radically different way, we’ll have to start imagining industrial policy and a little bit of a different way. The US and also the EU chastise China and say that China should follow the rules of the WTO. Well, one of the main criticisms is that China is subsidizing its own industries. But that’s not something that progressives should be opposed to.

If we’re thinking about rebuilding manufacturing and rebuilding good jobs in the United States, there’s nothing wrong with a industrial policy that’s subsidized in infant industries or simply trying to create, if we’re thinking about the Green New Deal, for example, and retrofitting our housing stock, for example, in the United States, there’s nothing wrong with producing and manufacturing in sustainable ways here in the United States. But in order to do that, we have to think about trade and industrial policy a little bit differently.

GREG WILPERT: Okay. Well, we’re going to leave it there for now. In another segment, we’re going to take a closer look at the USMCA trade deal. I was speaking to Nicole Aschoff, writer and editor at Jacobin Magazine. Thanks again, Nicole, for having joined us today.