Peace activists are pressuring BlackRock, the world's largest asset manager, to divest from war. CODEPINK's Ariel Gold and Sarah Eckel-Dalrymple discuss the new campaign, after protesting the NYC shareholders' meeting of BlackRock, which manages tens of billions of dollars invested in weapons corporations

Peace activists are pressuring BlackRock, the world's largest asset manager, to divest from war. CODEPINK's Ariel Gold and Sarah Eckel-Dalrymple discuss the new campaign, after protesting the NYC shareholders' meeting of BlackRock, which manages tens of billions of dollars invested in weapons corporations 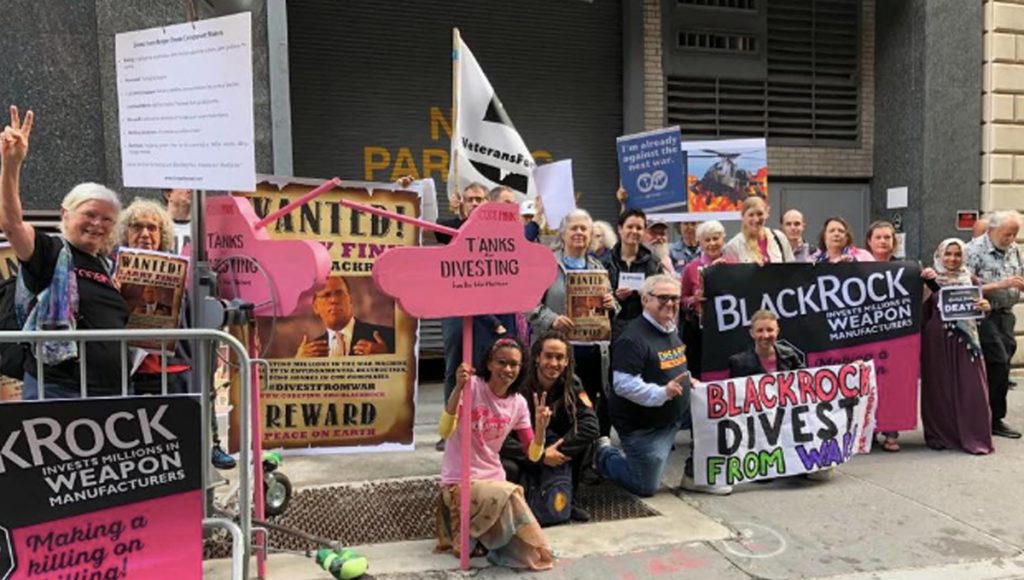 BlackRock has been described as the biggest shadow bank on earth. The investment management corporation is the largest asset manager in the world, overseeing $6 trillion in assets. Although based in New York City, the company operates in more than 100 countries. The shadow bank is also heavily invested in the military-industrial complex. BlackRock manages an iShares fund that is devoted solely to defense spending. BlackRock’s investments in weapons corporations is a who’s who of the military-industrial complex. The company holds tens of billions of dollars invested in Boeing, Lockheed Martin, Raytheon, Northrop Grumman, and General Dynamics. It also oversees investments in gun manufacturers here in the United States.

Given the major role the world’s largest asset manager plays in fueling the military-industrial complex, a coalition of peace organizations has launched a campaign calling on BlackRock to divest from war. This new campaign is being spearheaded by the women-led peace group Code Pink. On the morning of Wednesday, May 23, activists from Code Pink and other peace groups protested at the BlackRock shareholder meeting at a luxury hotel in Manhattan.

Joining us to discuss this new campaign calling on BlackRock to divest from the military-industrial complex are two organizers with Code Pink, Ariel Gold and Sarah Eckel. Ariel Gold is the national codirector for Code Pink, and runs the organization’s Campaign for Palestinian Rights. Sarah Eckel is the campaign manager of Divest From the War Machine, and she oversees the BlackRock campaign. Thanks for joining me here on the Real News, Ariel and Sarah.

ARIEL GOLD AND SARAH ECKEL: Thanks so much for having us on.

BEN NORTON: All right. Sarah, let’s start with you. You are leading the campaign to divest, to pressure BlackRock to divest from war. Can you talk about why Code Pink is, along with other groups, helping to lead this campaign, and what are your goals?

SARAH ECKEL: Well, as you mentioned, BlackRock is the world’s largest shadow bank. They have $6 trillion in assets, and they’re heavily invested in the war machine. They’re making a killing on killing, and profiting on war, death, and destruction around the world. The goal of the divest campaign is to stop profiting from war, that there should be no profit on war, that we should not be invested in these companies whose only goal is to make bombs and missiles and tanks, that is wreaking havoc all over the world.

BEN NORTON: And then Ariel, can you jump in here and speak about the conflicts that are actually impacted by this. Of course there are a few different things we could talk about, and I do want to get to the domestic element, because BlackRock likewise invests in U.S. gun manufacturers. But before we get to that, let’s talk about some of these these wars, where we’ve seen U.S. military equipment made by these companies directly involved. The war in Yemen, in which Saudi Arabia has been using U.S. weapons. Of course the war in Afghanistan, Syria, Palestine. Can you speak about some of these conflicts that Black Rock might help, be fueling?

ARIEL GOLD: Sure. Well, BlackRock absolutely is helping fuel all of these wars that you just mentioned. The situation in Yemen right now is the worst humanitarian crisis of our time, and that is a direct result of Saudi, the Saudi-led war taking place right now in Yemen. In Yemen every 10 minutes a child dies of malnutrition from, as a direct result of this war. And it’s just continuing. The U.S. is continuing to support Saudi Arabia by handing weapons to them, weapons sales. And as they do, as we do that as the U.S., as we authorize weapons sales to Saudi Arabia, all of these companies that were mentioned, Lockheed Martin, Boeing, Raytheon, they profit and BlackRock profits.

We just saw this past month the single largest massacre in Gaza since the 2014 war on Gaza, where over 60 unarmed protesters were gunned down in a single day. And this is just unacceptable. And we’re watching one of the companies that wasn’t mentioned before, is the company Elbit, which is the largest publicly-traded Israeli arms company. Elbit has been complicit in all of Israel’s assault on Gaza. They’re a major manufacturer and exporter of armed drones and BlackRock owns tens of thousands of stock in Elbit.

BEN NORTON: And then Sarah Eckel, back to you. You helped lead this protest. It wasn’t just Code Pink, but you’re spearheading the campaign with a coalition of other peace groups. This was on Wednesday, May 23, here in New York City. Can you speak about the response you got from those who were attending this BlackRock investment shareholder meeting?

SARAH ECKEL: Well, I think that we definitely got their attention. And as you mentioned earlier, there is a connection to civilian arms, as well. And we were able to stand outside and to highlight BlackRock’s investments in military weapons and in civilian weapons together. And they are-. Definitely got their attention, and they saw us. And we had some folks on the inside, Ariel was part of that. So that’s really highlighting again what the shareholders are profiting from. And one of the things that BlackRock has is a fund exclusively dedicated to defense and aerospace. And this is one of the things that we’re really highlighting. BlackRock claims to be a socially responsible company. They put out a statement at the end of 2017 saying that they were going to start holding companies accountable for being good corporate citizens, while they continue to profit from war and death and arms sales.

BEN NORTON: Yeah, and this is again for Sarah. Related to that, we briefly mention that BlackRock has investments in U.S. gun manufacturers, who of course likewise profit from violence here at home. Can you speak about this as well?

SARAH ECKEL: Absolutely. They do invest in civilian arms manufacturers, and this is actually a connection between military weapons, as well. The U.S. sold small arms to the United Arab Emirates. And you mentioned, and going back to what Ariel said about the war in Yemen, they’re using that in that war. Those are similar weapons that are being used at home in cases like the Parkland shooting. And actually, hitting on that Parkland shooting, after that after that happened BlackRock put out a statement that they were going to create a fund that excluded civilian weapons manufacturers and retailers. And again, they keep saying that they’re a socially responsible company and they’re working on this, but they are continuing to profit from these arms sales, from the war, from the violence at home and abroad.

BEN NORTON: Yeah, and this is for Ariel Gold, here. Code Pink was not the only group that is part of this coalition. Can you speak about some of the other groups that were involved, and what kind of support have you gotten in this campaign calling for BlackRock to divest from the military-industrial complex?

ARIEL GOLD: Sure. So there were tons of people out there with us. People are really outraged that BlackRock is profiting from death. So you know, just to name a couple of groups with us, we have the Coalition to End the U.S.-Saudi Alliance. And we have people, members of the Granny Peace Brigade with us, United for Peace and Justice was part of it. Veterans for Peace New York City, and many more. World Beyond War. It was a large group of us out there coming together to say that this is an issue for all people. The protection of our world, whether it be environmental, which BlackRock is also complicit in environmental destruction through its investments in weapons manufacturers. So whether it be environmental or death taking place across the world, this is an issue for all of us.

And so we were out there as a group, and there was also another group there at the same time focusing on the domestic weapons, calling for BlackRock to get out of these sales. And we’re, we’re not going to let up. You know, we’re going to continue to pressure them.

BEN NORTON: Great. And then Sarah, we’ll go back to you, we’ll come to a conclusion here. Can you speak about the Divest from the war machine campaign this new campaign targeting BlackRock is part of a larger initiative led by Code Pink calling for divestment from the military industrial complex. Can you explain what your goals and strategy are?

SARAH ECKEL: Yes. Divest From the War Machine campaign seeks to empower individuals and communities to remove our assets that are profiting from war out of our cities, our towns, our universities, our colleges. Also going after corporate giants like BlackRock, and calling our congressional representatives to stop taking campaign contributions from weapons manufacturers. We’re so entrenched in war and how this has infiltrated our society that we are actively working to separate ourselves from this, so that we’re not continuing to have the profits and a bottom line drive how we are interacting with other countries in the world around us.

BEN NORTON: Well, unfortunately we’ll have to end our discussion there. I was joined by Ariel Gold and Sarah Eckel from Code Pink. Ariel Gold is the national co-director for Code Pink, and runs the organization’s Campaign for Palestinian Rights; and Sarah Eckel is the campaign manager of Divest From the War Machine, and she is currently overseeing this new initiative to pressure BlackRock, the world’s largest shadow bank, to divest from the military-industrial complex. Thanks for joining me.

ARIEL GOLD AND SARAH ECKEL: Thanks so much. Thank you.