Palestine and Rule of Power

Alaa Tartir discusses his new edited anthology: Palestine and Rule of Power: Local Dissent vs. International Governance. A new look into how international aid and also the Palestinian security reform are mechanisms which are used to crush Palestinian resistance to the Israeli occupation

Alaa Tartir discusses his new edited anthology: Palestine and Rule of Power: Local Dissent vs. International Governance. A new look into how international aid and also the Palestinian security reform are mechanisms which are used to crush Palestinian resistance to the Israeli occupation 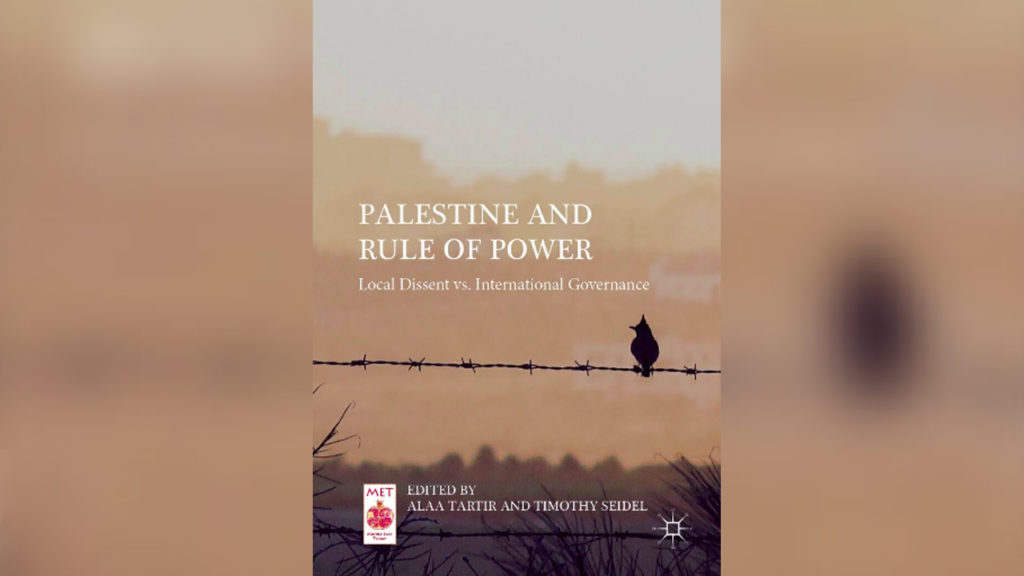 A new book was just released that exposes how the international communities and the Palestinian leadership’s efforts to end Israel’s occupation of Palestine have been turned into mechanisms of control and lead to new forms of resistance. The book, which was published by Palgrave Macmillan, is called Palestine and the Rule of Power: Local Dissent vs. International Government. It was edited Alaa Tartir and Timothy Seidel. Eight scholars wrote the book’s ten chapters. They are mostly young scholars who are now breaking into the field of Israel-Palestine studies, and they offer a fresh and previously unseen analysis of the Israeli occupation, and the ways by which Palestinians attempt to resist it.

We’re joined now by one of the editors and authors, Alaa Tartir. Alaa is a research associate at the Center on Conflict, Development, and Peacebuilding, and a visiting fellow at the Department of Anthropology and Sociology at the Graduate Institute of International and Development Studies in Geneva, Switzerland. Thanks for joining us today, Alaa.

GREG WILPERT: So, first of all, what would you say, in most general terms, what the main lessons to be drawn are from this book? How does international governance relate to local dissent?

ALAA TARTIR: We can conclude by highlighting three main lessons out of the book. The first two or three main messages. The first message and conclusion of the book is that settler colonialism and structures of apartheid will be always resisted. This resistance takes different shapes and forms, and the mobilization also varies according to the different Palestinian realities, be it Palestinians in the West Bank, in Gaza, within 1948 territories, or even [approved]. So the main first lesson is that the resistance will always accompany any kind of expressions of power.

ALAA TARTIR: The second message that the book tries to communicate is that international aid system and problematic external intervention can become and are indeed part of the problem in the way that they are manifested on the ground and in Palestine. And that means, also, that eventually reforming and reinventing this flawed structure of aid, as well as the problematic external intervention, can be part of the solution. But over the last 25 years they’ve been entrenching the problem. And they’ve been another expression of power in Palestine.

The third message and conclusion of the book is that securitisation brings more securitisation. Or in other words, whenever external interventions are purely driven by a security agenda, they only lead to more authoritarianism and repression. And in particular, as part and parcel of the state building of the Palestinian Authority project, the security sector reform led to further authoritarianization, further repression, basically because it did not address the imbalances of power between the colonized and the colonizer. And therefore the security of the colonized people were not at the top of the agenda.

So these are the main three messages that the book tried to communicate, in general terms.

GREG WILPERT: Now, what insights do you draw from the book to understand the reasons for international donors, especially from the European Unionm to support Israeli settler colonialism in Palestine, and for U.S. donors to arm the Palestinian security forces. What’s in it for these groups?

ALAA TARTIR: Well, here we need to make a distinction between the American aid, which–the U.S. aid [ceased] this operation recently, and between the European aid. The American aid has been inherently problematic over the decades, not only because the U.S. administration is the biggest donor to the Israeli government and Israel, and especially in military aid. But also the aid that it provides to the Palestinian Authority, and in particular to its security establishment, is meant to secure the Israeli people, Israeli citizens, and Israeli settlers, and not to enhance the security of the Palestinian people. And it was invested in the Palestinian Authority in order to enrich it when it comes to security coordination and security matters as a subcontractor to the Israeli occupation.

And here is the–here is the major problem. When a national body, because of international intervention, because of American–particularly American aid–get transformed into a mere subcontractor to that occupation, that sustained the occupation. Deliberately and undeliberately; consciously and unconsciously. And that is why the American aid, the American intervention, has been part of the problem, and in fact created lasting impact that is damaging for the Palestinian struggle and for the Palestinian people, not only to their security, but to the overall agenda of the national struggle.

And on the other hand, we see European aid also invested in the peace process, and invested in the Palestinian Authority, towards transforming it into a state with functioning institutions with democratic transitions. However, that failed quite miserably. And even with all the good intentions of the European donors, they actually did not help in making any positive change when it comes to democracy, or even institutional statebuilding to make it more inclusive and democratic, but rather they directly and indirectly transformed also the Palestinian security establishment into more and more authoritarian structure. All of that within the structure of domination and control of the Israeli colonial occupation.

So where the aid structures and the aid system failed badly is in offering any kind of confrontation to that occupation, and any kind of accountability. Rather, they did the opposite. They sustained and changed the status quo where the occupying power, where the dominant actor just got further with the colonial project.

GREG WILPERT: I just want to turn to the process of putting together this book. Tell us a bit about the guiding principle that you used to choose the eight authors of the book and their topics. It seems that you have chosen to focus on the indirect mechanisms of Israeli control and the subversion of international aid, as you say, but not to the direct and brutal control and massacres in Gaza. On the Palestinian side you focus on the Palestinian Authority and the dilemmas of activists on the ground, but not so much on the armed resistance or the BDS movement. Why did you make these choices?

ALAA TARTIR: Well, you know, after all, I wish we can include more and more–more chapters and more analysis in the book. Unfortunately it was not possible to include more coverage, particularly on Gaza, per se. But this does not mean that Gaza is excluded, by any means, because the analysis still holds for the colonial condition that exists over the West Bank and Gaza, and the apartheid structure that also exists. So although we do not have a particular chapter that reflects on how the Palestinians in Gaza are resisting all these sectors of power, it is clearly and implicitly embedded in all these chapters. Because when we talk about international intervention, it matters for all Palestinians, be they in Gaza or the West Bank, when we talk about the American aid, when we talk about the European aid, when we talk about the tactics of mobilization, when we talked about the authoritarian transformation. So that all matters to the Palestinians, wherever they exist.

So the guiding principles, or one of the main guiding principles, behind the establishment or behind the release and production of this book is that as editors and as contributing authors we want to focus on the manifestation of the rule of power, in particular through the lens of settler colonialism and what it means to start the process of statebuilding under this condition of colonialism, as well as how these internal and external diffusions, or inwards and outwards diffusions, interact, contradict with each other, and what kinds of tensions we see there.

So in this book we try at least to tell ten different stories, because–although all the chapters are clearly and directly connected with each other, but each chapter tells a story by itself, moving from the very local dynamics to the very external dynamics, and ending by how these internal and external dynamics are interacting with each other when it comes to the very securitized space in Palestine, and then especially as reflected in the security sector reform and security and state building process.

GREG WILPERT: OK. Well, we’re going to have to leave it there for now, but we recommend people to check out the book for themselves. I was speaking to Alaa Tartir, a research associate at the Centre on Conflict, Development, and Peacebuilding at the Graduate Institute of International and Development Studies in Geneva, Switzerland. Thanks again, Alaa, for having joined us today.

Dr. Alaa Tartir is the Program Director of Al-Shabaka: The Palestinian Policy Network and a Research Associate at the Center on Conflict, Development, and Peacebuilding (CCDP) at the Graduate Institute of International and Development Studies (IHEID), Geneva, Switzerland. Amongst other positions, Tartir previously served as Visiting Scholar at Utrecht University’s Department of History and Art…