Hundreds of protesters gathered in East London at one of the world’s largest arms fairs seeking to peacefully prevent the Defence and Security Equipment International from going ahead as usual.

Hundreds of protesters gathered in East London at one of the world’s largest arms fairs seeking to peacefully prevent the Defence and Security Equipment International from going ahead as usual. 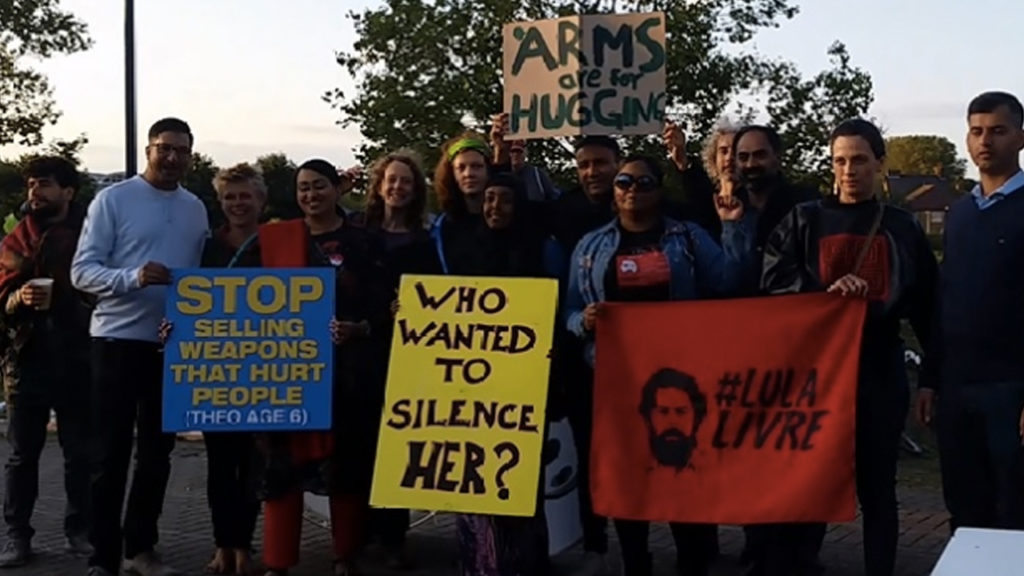 MOHAMED ELMAAZI (VOICE OVER) (00:00):Every two years, the UK hosts one of the world’s largest arms fairs called the Defence and Security Equipment International or DSEI.ANDREW SMITH (CAMPAIGN AGAINST ARMS TRADE) (00:08):

A varied collection of individuals, groups and organizations have been working together to prevent the DSEI from going ahead by blocking transportation of the weaponry on display into the East London Excel Center, which hosts the arms fair.

Oh, the policing has been, Oh, it’s been an overreaction. In fact, we’ve seen over a hundred people who’ve been arrested this week for peaceful protest and some of the policing has been very violent. Some of policing has been very heavy handed. And ultimately the people who have been protesting this week have been protesting peacefully –  trying to stop the weapons from getting into the world’s biggest arms fair. And over a hundred people have been arrested for doing this and people leave. The police should be investigating frankly over torturous brutal regimes who are going to be in London buying up weapons.

Faith groups, socialist groups, Palestine solidarity campaigners, Kurdish campaigners, and others have been doing all they can to both oppose the DSEI arms fair – while also seeking to educate people on the connection between the fair and British foreign policy, which produces countless refugees in the middle East and around the world.

My name is Sanaz Raje and I am from the group Unis Resist Border Controls. It’s a national campaign made up of British lecturers, students and activists, not just British ones of course, but people that are migrant especially, opposed to the Hostile Environment policy in the UK. And specifically how it functions in higher education in the UK.

There’s been border controls inside higher education for many, many years. And in fact, sometimes it predates what we now consider as the Hostile Environment policy that came into effect, with Theresa May when she became Home Office Secretary. And she instituted the policy in 2012 that became codified into law with the Immigration Acts of 2014 and 2016.

So essentially what it does is creates everyday borders in the UK and it turns regular people into border guards. And we see this in the NHS, we see this in schools and obviously the work we do inside the university inside pushing back against this policy, we make the links between, the carceral university and how basically all of these policies are linked together. How universities are very much complicit in the arms trade as well and creating like an extra layer ‘hostile environment’ in terms of migrants all over the world.

SAM ALEXANDER (BAQUE DA RESISTANCIA) (03:00):My name’s Sam and I’m here to represent Baque da Resistancia. Those are the Brazilian Drums of Resistance. We are here to protest against the arms fair, to sales of arms to Brazil, to sales of arms to [the] Brazilian military, and to sales of arms to all regimes that are killing innocent people around the world.MANUELA BENINI – BRAZILIAN ACTIVIST (03:20):We brought some placards and banners, uh, in, um, in response to the murder of Marielle Franco, which was a Brazilian politician and activist who was murdered in 2018 in Rio de Janeiro. Um, the gun that killed her was from, a German make and is being traded right now in the arms fair.SAM ALEXANDER (BAQUE DA RESISTANCIA)  (03:41):Well, the militarization of the Brazilian population is actually happening. I mean, they’re arms going out all over the place with in Brazil. The president [Jair Bolsonaro] is trying to liberate arms for everyone and he’s trying to also, his vice president is over here at the moment. Trying to do the arms deals. So we want to stop that because the fascist with guns is no good. And one of the things about taking music, taking drums to a protest, is that it’s very negative energy always going out when you’re shouting negative things at  people. But actually trying to say something in a positive way with positive music can make a lot of difference to the people who spend all their time in camps like this and places like this. So we believe in bringing music to these kinds of events.MANUELA BENINI – BRAZILIAN ACTIVIST (04:27):It’s wonderful to be here with such incredible people. It makes me feel that I’m not alone in believing in peace.
MOHAMED ELMAAZI (VO) (04:41):
This is Mohamed Elmaazi reporting from London.