Two years have passed since the establishment of the Pitchford Inquiry into Undercover Policing. Participants say that as of yet, no oral evidence has been taken and that the police are seeking to delay the process in perpetuity. TRNN Researcher Mohamed Elmaazi attended the first Hearing at the Royal Courts of Justice on April 04th 2017, and interviewed participants and their supporters.

Two years have passed since the establishment of the Pitchford Inquiry into Undercover Policing. Participants say that as of yet, no oral evidence has been taken and that the police are seeking to delay the process in perpetuity. TRNN Researcher Mohamed Elmaazi attended the first Hearing at the Royal Courts of Justice on April 04th 2017, and interviewed participants and their supporters. 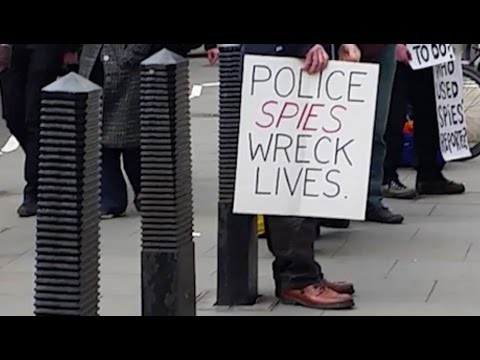 MOHAMED ELMAAZI: On March 12th, 2015, the then U.K. Home Secretary, Theresa May, succumbed to immense public pressure, and established a public inquiry into undercover policing. One of the last straws to force the Home Secretary’s hand was the revelation that the mother of Stephen Lawrence, who was murdered in a racially motivated attack, had her privileged legal communications spied upon by the police.

Sir Christopher Pitchford, a senior English judge, was appointed to lead the inquiry. Campaigners complained that the police have yet to provide the participants with any disclosure whatsoever, on their undercover operations. This is despite two years having passed since the Pitchford inquiry was set up.

Undercover police have been found to have infiltrated environmental and social justice organizations, acted as agents provocateurs, and developed long term relationships with activists, and in some cases even fathered children, all while their true identities as undercover police officers were kept secret.

On April 5th, 2017, a hearing was scheduled at the High Court, at the Royal Courts of Justice, for Lord Pitchford to hear arguments from the police, who were requesting an additional six months for further risk assessments, before considering revealing the names of officers formerly employed by the Special Demonstration Squad, as it was then known.

The victims of police surveillance and infiltration, as well as their supporters, came to the Royal Courts of Justice in the morning to attend the hearing. But also to demonstrate, and demand the immediate release of the cover names used by political undercover police officers. The names of the groups spied upon, the personal files held on those spied upon, and fair representation at the inquiry.

At present, around 200 victims are forced to share one legal team in court, while the police and State, are represented by five separate legal teams.

KEVIN BLOWE: I’m here today because I’m part of one of the groups that is a core participant in the Pitchford public inquiry. What corporate … means is, is the inquiry has recognized us as recognized, after having some useful contribution to make to the inquiry’s success.

So, it’s different from just being a witness in some way, that we have a unique insight into the issues around undercover policing because we’ve been targeted. And that we can bring that to make sure that this in inquiry is able to look into the… what happened over the last 4-8 years.

EVELYN LUBBERS: I’m Evelyn Lubbers, I’m with the Undercover Research Group. It’s a network of activists who are engaged to investigate in suspicions into probable undercovers, and we’ve been involved in exposing quite a few of the undercovers that are known now.

DANNY SHIVERS: I’m one of the core participants in the Pitchford inquiry, because I was one of the people spied on by the undercover cop Mark Kennedy.

PAUL GRAVETT: My name’s Paul –- Paul Gravett. I’m a core participant in the Undercover Inquiry. I’m here today because we are looking for an end to the police’s delaying tactics, obstructing, slowing it down. So, we want disclosure of all cover names used by the police spies. We want the names of all the groups that they spied on, because there were over 400 of them. And we also want the documents, the files that the police have on us.

MICHAEL ZEITLIN: Oh, well, we have been giving advice to squatters, and other homeless people for the last 40 years. And obviously been very involved in the squatting movement, particularly in London, but yeah, all over the country.

ANONYMOUS UNION MEMBER: We’re here to support our comrades who were victims of blacklisting, and undercover police surveillance and infiltration, people’s that their lives were in…

MOHAMED ELMAAZI: Do you know anyone who’s been affected?

ANONYMOUS UNION MEMBER: Um… those two over there, mates of mine… I work with them.

MOHAMED ELMAAZI: Why? What did you hear?

DAVE SMITH: Hello. My name’s Dave Smith, and I am a core participant in the Pitchford Inquiry here on Undercover Policing. I was spied on by a number of undercover police officers because of my trade union activities on building sites in London. I’m a co-author with Phil Chamberlain, of a book called, “Blacklisted”, which is published by New Internationalist. And it exposes the role of multinational construction companies spying on trade union members, and also the links with the police spying on trade union members.

The reason we’re here today, is because it’s been three years since Pitchford started. And in those three years, there hasn’t been a single witness has given evidence. And our lawyers haven’t been given a single document, or a piece of documented evidence by the Metropolitan Police. Instead, what’s actually happening is, the Metropolitan Police is shredding evidence that’s intended for the inquiry. And we’re here today to say Pitchford means they should grab hold of the police, and stop this turning into an establishment whitewash.

A particularly concern of the trade unions, is that Pitchford has suggested that, because he’s so far behind, he could restrict the inquiry just to the operations of the Special Demonstration Squad, and the actual activities of the undercover police officers. But what we’re interested in just as much, is what the British state did with the intelligence afterwards.

It’s not so much the fact that they infiltrated trade unions; it’s the fact that they also then supplied the information to big business that meant our members couldn’t get jobs, and were out of work. That’s the human rights conspiracy we’re interested in looking at, as well.

And they say that they’ve reorganized the units and that there’s now a better control, but in fact we don’t know whether it’s still happening or not. Their most recent active undercover that we exposed was Mark Kennedy, and he was active until 2010, so that’s relatively recent. And while we haven’t uncovered anyone since… but that doesn’t tell you it doesn’t happen.

It ranges from unions, to climate groups, to the peace movement, anti-apartheid groups, and it started with the anti-Vietnam demonstrations back in ’68.

DANNY SHIVERS: So, essentially, this inquiry was meant to be about justice. It was meant to be about finding out what abuses had been carried out by the police, by undercover police, and trying to do something to right those wrongs, and get accountability for the people who are affected. And instead, this has been just one huge delay from the police side of things.

They continue to, like, throw blocks in the way of the progress in the inquiry, refusing to release information, just dragging their feet over every small procedural point. So, we’ve got to this point where we’re meant to be half way through the inquiry, and at this stage, we know we don’t know anything more about police spies than we before we started.

So, we’re here today to call for the police to stop dragging their feet, and for the inquiry to put its foot down, and demand the information that we need from the police.

And they’ve argued that the reason why they need to go in and examine at great length whether they release the cover names, of some of their officers, is about the risk to them. And what we’ve said is, there’s been 13 names released because of the act… because of the work that’s been done by activists so far. None of those people is there any point, in any risk.

They are massively over-playing the risk, and trying to drag this process out for as long as they can. Because what they’re hoping to do is to disarm people, make people more disillusioned, encourage people to step away from the inquiry. Maybe even to get the inquiry to collapse.

And today, they’ve asked again for another six months to look at the issue around risk -– risk assessments. And what we’re saying is they’ve had enough time now.

But until they reveal the — at least the cover names of all of the undercover cops — then we have no idea. So, for a year now we’ve been core participants with no actual way of knowing why we’re core participants, so how to participate?

DANNY SHIVERS: We as core participants, there’s around 200 of us, we are… we’re just people who have been affected by this issue. We have no money, or resources, or time to put into this, other than our own. And on the other side, you have, yeah, the police with their well-funded team of lawyers, doing everything they can to throw obstacles in the way of the inquiry.

The inquiry has given us a small amount of legal support, but nowhere near enough to genuinely represent 200 people, all with different stories of abuse by spy cops. So, one of the other things we’re calling for, is to even up that balance, and actually allow the core participants like us — who don’t have the power of the state, or the police behind them — to actually have the resources to properly represent ourselves.

MOHAMED ELMAAZI: This is Mohamed Elmaazi for The Real News Network, at the Royal Courts of Justice in London.