While U.S.-North Korea nuclear talks fail to proceed because of a lack of unanimity within the Trump administration, the North suspended peace talks with the South because of the U.S.'s refusal to lift economic sanctions, says Tim Shorrock

While U.S.-North Korea nuclear talks fail to proceed because of a lack of unanimity within the Trump administration, the North suspended peace talks with the South because of the U.S.'s refusal to lift economic sanctions, says Tim Shorrock 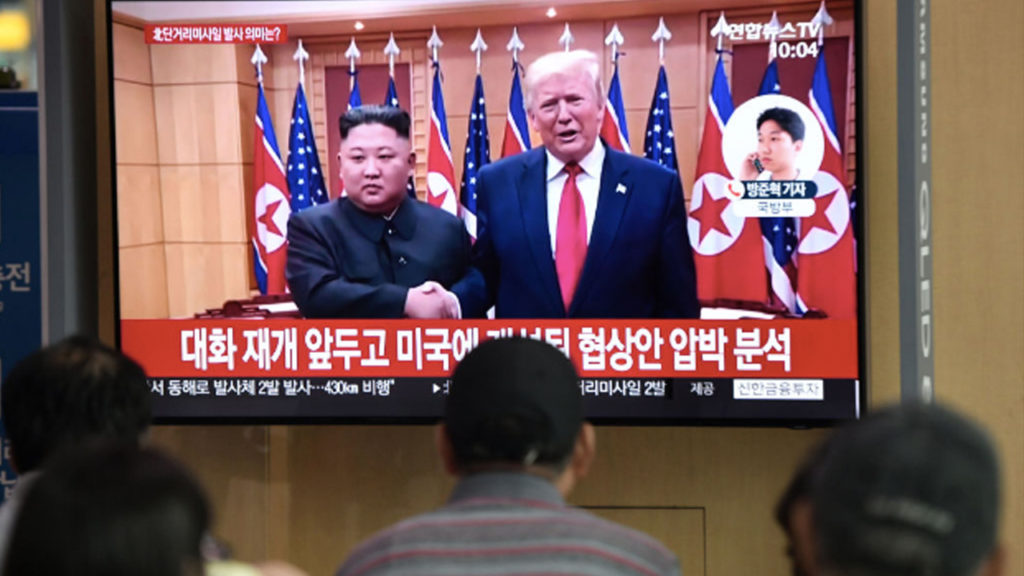 North Korea tested two short-range ballistic missiles on Friday according to South Korea’s military. This was the sixth time in the past month that North Korea tested ballistic missiles. Friday’s launches took place shortly after the North described South Korea’s President as “impudent” and announced that North-South Korean peace talks are over. The North Korean government protested against US-South Korean military drills that began last week, saying that these represented a “rehearsal for war.”

The cancellation of North-South Korean peace talks complicates the on-again, off-again nuclear talks between the US and North Korea. The two sides had agreed to restart talks in a personal meeting between North Korean leader Kim Jong-un and President Donald Trump in late June, but so far nothing much has happened. Last week, Trump said that Kim Jong-un had told him the talks could resume once the military drills concluded.

Joining me now to discuss the latest developments on the North Korean peninsula is Tim Shorrock. He writes about US-Korea relations for The Nation and for the Center for Investigative Reporting. Thanks for joining us again, Tim.

GREG WILPERT: So these were the sixth set of ballistic missile tests that the North has engaged in, in the past month. This seems rather bold considering that agreements had been made to restart nuclear talks with the US and peace negotiations with South Korea. Now, Trump has generally downplayed these launches, saying that they aren’t nuclear and aren’t intercontinental missiles. North Korea though is blaming the South for military drills. Now, first, are the two sets of talks really falling apart? And second, who would you say is responsible for the faltering of the talks?

TIM SHORROCK: Well, it seems that the North-South talks are definitely falling apart, which is too bad. I was there in Seoul almost a year ago in September when Kim Jong-un and Moon Jae-in had a very successful summit meeting in Pyongyang and they decided on some very sweeping agreements, including one to demilitarize the situation, de-escalate the military situation between the two sides. And they proceeded to do that. They also agreed at that time to begin a new round of economic projects, economic cooperation. And it really was a kind of exciting time and it seemed that a real corner had been turned.

But, unfortunately, since that meeting, the talks between the US and North Korea over its nuclear program has really gone nowhere. There’s been very few developments in those talks, very little progress despite the fact that Trump made this trip to Korea, and actually stepped over the line dividing the two sides, and walked into North Korea for a few minutes and had a meeting with Kim Jong-un where they agreed to restart their talks.

I think the problem is that the US apparently has not backed off its demands for total denuclearization before any kind of sanctions are lifted on North Korea. As you know, North Korea is very anxious to lift at least some of these sanctions imposed in recent years, because they’re really causing some harm to the North Korean economy and to Kim Jong-un’s plan to make the economy the centerpiece of his leadership, and to make some real economic progress in raising the standards of living of the North Korean people. And so these sanctions are very critical to him in that plan. But the US has not really changed its position. That was the reason for the collapse of the talks in Hanoi in the spring, earlier in March, when basically Trump told Kim at that time that they had to give up all their nuclear weapons as well as make progress in getting rid of some of their other conventional weapons, chemical weapons, that kind of weaponry, before any sanctions were lifted.

And North Korea has responded to that by testing these ballistic missiles, which are short-range and they’re conventional weapons. I mean, North Korea does have a military. They’re designed to defend North Korea against South Korean and US forces, as well as US forces in Japan. And so these missiles clearly hit pretty much any target in South Korea as well as in Japan, where US bases that are used for intervention in Korea are based. So there have been testing. As you said, there’s been a number of tests over the last few months. Almost every week it seems there’s been a new test. There was one yesterday.

And they’ve also been complaining that the exercises that the US has been holding this month with South Korea are designed, again, to practice basically regime change in North Korea, or a sign that South Korea is not serious about its negotiations. So I think it’s a combination of the US hard line combined with the North Korean demand that there be a sort of step-by-step process, including lifting of sanctions. I think that’s the cause for this. And like I said, I think it’s really sad because I think hopes were very high a year ago that things could move in a much better and more positive direction.

GREG WILPERT: All right. Now, as you said, the talks between the North and the South seem to be completely off the table at the moment. And it seems like North Korea is suggesting that they would rather engage with Trump instead of the South. Now, why is that? I mean, obviously negotiations are needed with both sides, but why completely dismiss the South at this point?

So they see the US as the real power behind South Korea in terms of these military and political relationships. And they see that as a barrier. And so that’s what the tension is about. I can’t really say why they’re proclaiming that the talks won’t happen. I think that’s more of a negotiating position, but it is clear that they want to have a resolution of the tensions with the US, and that has to be resolved before there can be progress between North and South.

GREG WILPERT: Now I want to turn to the US side of this relationship with North Korea. That is, most Democratic Party presidential candidates are strongly criticizing Trump over his handling of the North Korea relationship, saying that he’s being too soft on Korea basically. You recently wrote an article for this in The Nation titled “Most Dem Presidential Candidates are Attacking Trump’s Korea Policy from the Right.” What do you mean by that? And how should the policy be criticized?

TIM SHORROCK: Well, I think the policy can be criticized from the standpoint of, if you have this very hard line on sanctions and nothing can happen in terms of a US relationship with North Korea, nothing can happen in those peace talks until they give up everything, that’s a problem. And I think the hard line of the US, of Trump and Bolton, is the problem in terms of progressing in North Korea-US talks. And so I think that’s a very good point for candidates to make rather than going back to, as Joe Biden has, and some of the other candidates have, and saying that the traditional Cold War policy of the US is the one that should remain. During Obama, the policy was no talks until North Korea showed clear signs of getting rid of all its nuclear weapons. They basically said, “You have to first surrender, and then we’ll talk.” That was the position of President Obama. And that was the position of Joe Biden. And that position is the sort of old-line position that goes way back and it just won’t work. That’s not a way to progress.

And so I think going at this from a hawkish point of view and then saying, “We should put more pressure on North Korea,” in other words, up the military ante, seems pretty stupid in the sense of going out there and campaigning for actually raising tensions with North Korea. I don’t think that’s going to win anybody any votes from a practical standpoint. But it’s also very dangerous. If you escalate the situation, it’ll get worse.

So I think, really, there’s got to be a realistic position here, a realistic look at North Korea. Denuclearization should be seen as the end goal and not the immediate goal because the goal that was set out by Trump and Kim when they met in Singapore in June 2018, number one, was to rebuild and create a new relationship between the US and North Korea— have diplomatic relations, economic relations, create a new relationship. And then, number two was to support the peace process between North and South Korea. And so, from the North Korean point of view, that new relationship has not developed and the US is still sticking to its hard line. And so, that’s been a problem.

And it’s very important to understand that, while Kim Jong-un has dictatorial powers, he has more militaristic people, he has a hardline military that wants to maintain their weapons and does not want to make concessions to the United States. And so he’s got his own hardliners to worry about. And so, like we have, in the White House, we have a clash between or there’s clear differences between Trump and his hardliners like Bolton and others that are advising him. You have differences of opinion about how to approach North Korea, and then same thing with North Korea. You have hardliners who say, “Don’t give up anything. We shouldn’t give up our weapons.” And so, he’s having to convince his hardliners that North Korea will benefit out of these talks. And so I think that’s one of the reasons he’s letting the military test these weapons, which again, yes, they are ballistic missiles, but they’re short-range. They’re the kinds of missiles that pretty much any advanced military has.

GREG WILPERT: Okay. We’re going to have to leave it there. I was speaking to Tim Shorrock, a writer with The Nation and the Korea Center for Investigative Reporting. Thanks again, Tim, for having joined us today.

TIM SHORROCK: Thank you so much.

Tim Shorrock is a Washington-based journalist who spent part of his youth in South Korea and has been writing about North and South Korea since the late 1970s. He just returned from a two month stay in Gwangju, South Korea, where during the Korean president campaign he interviewed South Korea’s President Moon Jae-In. He writes…