While it's good the Nobel Memorial Prize in Economics went to researchers who study poverty, their research falls far short of describing its structural causes, says development economist David Ruccio.

While it's good the Nobel Memorial Prize in Economics went to researchers who study poverty, their research falls far short of describing its structural causes, says development economist David Ruccio. 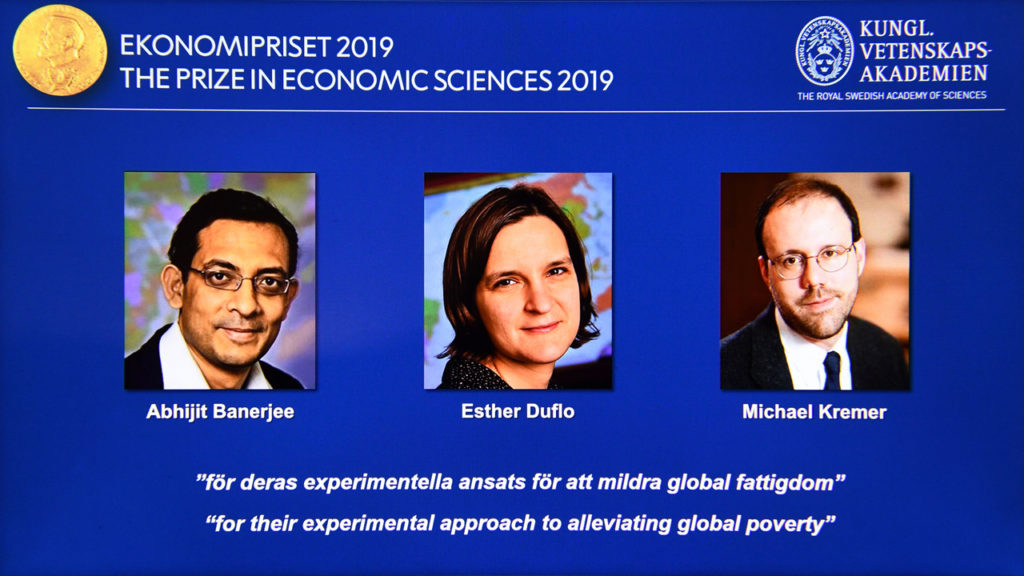 This week, the Nobel Memorial Prize in Economic Sciences was awarded to three economists doing research on the issue of poverty; Abhijit Banerjee and Esther Duflo, both of MIT, and Michael Kremer of Harvard University. Duflo is the youngest to win the economics prize and she is the second woman to have been awarded. Also, it is the third time the prize went to non-white economists. This year’s award was also unusual in that it awarded a research method more than a particular theory or discovery, and that the topic was the issue of poverty. Here’s a brief clip from Jakob Svensson, a member of the Prize Committee for Economic Sciences, explaining the research of the award winners.

JAKOB SVENSSON: The new experimental approach has pushed the research frontier forward in crucial ways. First, it helps us identify the causes of poverty. Second, it helps us draw conclusions about causal effects of policies to fight global poverty. And finally, it facilitates the analysis of cost-effectiveness across different options or policies to reduce global poverty. Well, in essence, in the new approach, this broad question about why are schoolchildren not learning, are broken down into more detailed and specific questions, such as: What’s the impact of providing more school inputs – for example, textbooks? How can we reduce teacher absence? And what’s the impact of such a reform? And then it tries to answer these specific questions using field experiments, that is experiments among the people most affected.

GREG WILPERT: The Nobel Memorial Prize in Economics was originally not part of Alfred Nobel’s awards, but it was launched over 70 years later, in 1969, by Sweden’s Central Bank, which is why it is the only one called a “Memorial Prize.” It has often been criticized, however, for its rather pro-capitalist bent.

Joining me now to take a closer look at this year’s Nobel Memorial Prize in Economics is David Ruccio. He recently retired as professor of economics from the University of Notre Dame, where he taught for 37 years. He specializes in the theory and practice of development economics, especially in Latin America. Thanks for joining us today, David.

GREG WILPERT: So poverty is certainly a major issue considering that inequality continues to rise, and that over half a billion people live in conditions of extreme poverty today, and that precarious employment affects hundreds of millions and still on the rise. So shouldn’t it be seen as something positive that this year’s economics prize went to researchers focusing on the issue of poverty?

DAVID RUCCIO:  My own view is that the prize should go every year to somebody who’s focused on poverty. It’s why I got into economics to start with, and why, in fact, many economists get involved. People are bothered by poverty, widespread poverty, and poverty that seems not to diminish. As you say, over half a billion people, 700 million, some say even more, are below the deep poverty line, let alone levels above that.

GREG WILPERT: So you have long specialized in the same area of the three award winners, that is in development economics. Now, in the process, you have identified three main problems with their work. And I just wanted to focus on two of those problems. Now, first, you criticize the absence of a class analysis in their work. Now, what do you mean by that? And how does the absence of class analysis make their research problematic?

DAVID RUCCIO:  It’s one of these funny things where they never mention class. They, not only Duflo, Banerjee, and Kremer, but many development economists working in the same tradition, they’re concerned about poor people. So class is there kind of in the background, lurking in the background, haunting their work, but they never explicitly mention it. They never explicitly theorize it. And so they can’t get at the class dimensions of poverty. So they’re worried, for example, about, what is the most effective way of organizing classrooms? Should students be given free textbooks or deworming pills? That’s not unimportant, but the way that that school system fits into the class structure of developing countries, just as it does in the United States, that’s never mentioned, never studied.

So when people say that they are, as the Central Bank did, studying the causes of poverty, well, as it turns out, they’re studying some of the, what we might call “smaller” causes of poverty, but not the larger ones. So they’re concerned about how that classroom is structured, how much money should be devoted to one or another little program, but they don’t think about, they don’t worry about, they don’t study the larger causes of poverty. And this is the problem with these prizes. It awards some work, but it then obscures, it hides from view, it puts to the side other kinds of view, the kinds of things that, as I say, got me involved in development economics to start with.

GREG WILPERT: Now, another criticism that you’ve levied, which is perhaps a little bit more abstract, but you’ve mentioned that it also leaves out the issue of subjectivity. Now, what do you mean by that? And how does the omission of subjectivity, that is of the people being studied and also the ones who are doing the studying, create problems for poverty research such as that of the award winners?

DAVID RUCCIO:  It is, as you say, it can be very abstract, so let me try to make it more concrete. Subjectivity comes in at two angles, the subjectivity of the economists and the subjectivity of the people who are involved in these field experiments, these random control trials. On the economists, the presumption here is that economists are like plumbers, that they’re technicians, that they’re just there to fix the plumbing. What’s denied, what’s never discussed, is the fact that different groups of economists–they, myself, many other people who work in the field of development economics, as well as more broadly–come at it from different theoretical viewpoints. Therefore, there’s not one group of economists, there’s not one economic method. There are many different economic methods, many different economic theories. And that’s never addressed in this particular way of approaching development economics. So it kind of denies the subjectivity of economists.

Development economics, for me, was always interesting precisely because it was the area in which mainstream economics was most criticized, in which alternatives to mainstream economics were most developed, and in which economists were in constant communication with people in other fields, in anthropology, in sociology, history, and so on. That all goes out the window in this approach. So it denies a kind of broader, more interesting subjectivity on the part of economists, right? They’re supposed to be plumbers, not theoreticians, not scholars, not thinkers. Then there’s the subjectivity of the people in these studies. The presumption, this is why I refer to this year’s Nobel Prize as kind of a “revenge of neoclassical economics,” the presumption is that everybody out there is a rational self-interested decision-maker who just wants to get more stuff, more goods and services, more health, more education.

That’s exactly what neoclassical economists have always presumed. Now, first of all, it’s not just poor people who make bad decisions. They’re the people running these societies, the elite, who make very bad decisions. We know that in the United States because we got the second Great Depression out of it. And we know it in third-world countries because poverty doesn’t go away. First problem. Second problem is, yeah, people are rational. They make rational decisions sometimes. They also make lots of non-rational decisions. We vote, for example, and any neoclassical economist will tell you that it is irrational to vote. That’s a larger issue, we can come back to it. But people are also guided not only by self-interest and make rational decisions, but they’re also guided by, for example, fairness. They’re guided by justice. They’re guided by resentment that their landlords take most of what they produce. Those kinds of subjectivities, if you will, those aspects of their behavior and identity, completely disappear in these kinds of studies. That’s a problem.

GREG WILPERT: Now, finally, what kinds of economic policy interventions would you say are more effective for reducing poverty if the kinds of interventions, as you mentioned in the beginning, that they propose, end up being kind of small stuff? What is the more bigger picture, would that involve?

DAVID RUCCIO: Okay. Let me give you a concrete example, and this is actually from the World Bank, so as mainstream a development organization as exists out there. This is many years ago, they devoted their entire report to poverty. So this year’s Nobel Prize certainly is not the first time that mainstream economists have been worried about poverty. What was fascinating about the report, it was a tiny little section in the third world. One was increasing education, and the other was changing land tenure systems, agrarian reform, if you will, giving poor people more land, more rights to land, so that they could farm.

Those are not an exhaustive list, but those are some of the “big issues” that have to do with the existence of widespread poverty, the continued existence of widespread poverty in third-world countries, exactly the kinds of countries where Banerjee, Duflo, and Kremer have been doing their work. And they’re never addressed in this framework. My own view–not to be too cute about it–would be that I would give them and their co-researchers lots of money to do these kinds of studies, and then I would give them even more money not to do anything with it, to broaden their perspective, ask questions, and then we might come around to actually solving the problem of poverty.

GREG WILPERT: Okay. We’re going to have to conclude there. I’m speaking to David Ruccio, professor emeritus of economics from the University of Notre Dame. Thanks again, David, for having joined us today.

David Ruccio is recently retired as a Professor of Economics from the University of Notre Dame, where he taught for 37 years. He specializes in the theory and practice of development economics, especially in Latin America.

Economic Development for Transformative Structural Change: Lack of Alternatives Is Not the Problem (pt 1/4)