Residents of Bradford, England say they are growing increasingly frustrated with the uncertainty that remains over Britain's exit from the EU.

Residents of Bradford, England say they are growing increasingly frustrated with the uncertainty that remains over Britain's exit from the EU. 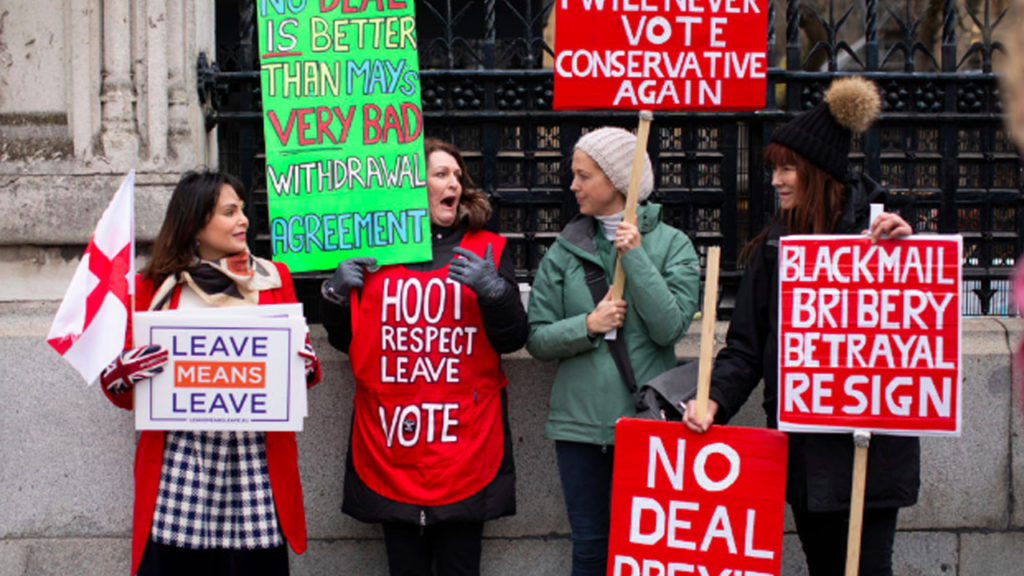 JAISAL NOOR: British lawmakers have rejected a no-deal Brexit, a proposal to leave the European Union without a formal exit deal, on Wednesday, March 13. This comes a day after a humiliating defeat for British Prime Minister Theresa May. Lawmakers overwhelmingly voted down May’s withdrawal agreement Tuesday, March 12 for the second time.

JAISAL NOOR: Opposition leader Jeremy Corbyn has called for new elections, and recently backed calls for another referendum on Brexit.

JEREMY CORBYN, LABOUR PARTY LEADER: Maybe it’s time instead we had a general election, and the people could choose who their government should be.

JAISAL NOOR: On Thursday, March 14, Parliament is due to vote on whether to ask the EU for an extension to the March 29 divorce date, which is enshrined in law–something to which all the other bloc’s 27 members must agree.

Earlier on Wednesday, The Real News spoke with residents of Bradford, England, asking what they thought should happen next.

PHIL COATES, PROFESSOR: I think our politicians really have failed miserably as an entity, not just one party.

BETHANY, MARKETING PROFESSIONAL: I think it’s affecting all businesses in Britain. I think the uncertainty is the main thing. They don’t know who they can trade with, how they’re going to trade with them.

HIRON MIAH, REMAIN SUPPORTER: To me it feels like we’re all in a bit of a limbo situation.

BETHANY: We shouldn’t be leaving on terms that completely restrict us. I think it’s an unfortunate situation to be in. However, we are where we are. The EU clearly don’t want us to leave. There needs to be a compromise. This country has decided they want to leave, and we want to trade with the EU, so we need to figure out how to do that.

ALEX GRUNWALD, BRADFORD RESIDENT: During the first referendum there were a lot of lies being spread, especially by Nigel Farage, especially. Because he was driving around a big bus saying “Oh yeah, all this money that goes to the EU, we’ll put it in the NHS instead. That was revealed as a lie pretty much right after the referendum.

MICHAEL, STUDENT, GALLERY WORKER: Well, I mean, in Bradford it’s like one of the poorest cities in the UK. Inequality is massive here. You know, you kind of–they don’t need to address things in Europe, because when we was in Europe we didn’t address things; now we’re trying to address it, saying Europe will fix things. I mean, it does sort things out in this country.

HIRON MIAH: There is an impact on on our everyday lives. You know, like you say, in terms of austerity, or in terms of the education sector. There’s a lot of things that probably would’ve been at the forefront of policy and thinking and issues that are affected everyday–you know, like Universal Credit, for instance. That’s like…

BETHANY: Our MPs and our government should be focusing on what the people need right now. However, there was a vote, and they need to deal with that. I’d like them to still be focusing on everything else that needs to be done to make sure that we’re looking after every woman in this country, from the lower earners to the higher earners, and making sure that we’ve got the health care that we need, and we’ve got the support system in place to make sure that we can function properly.

JAISAL NOOR: For The Real News, this is Jaisal Noor in Bradford, England.