"If I were on the confirmation committee, I would be asking Mike Pompeo exactly how much money the Koch network has invested in him that has not been publicly disclosed," says Lisa Graves of Documented

"If I were on the confirmation committee, I would be asking Mike Pompeo exactly how much money the Koch network has invested in him that has not been publicly disclosed," says Lisa Graves of Documented 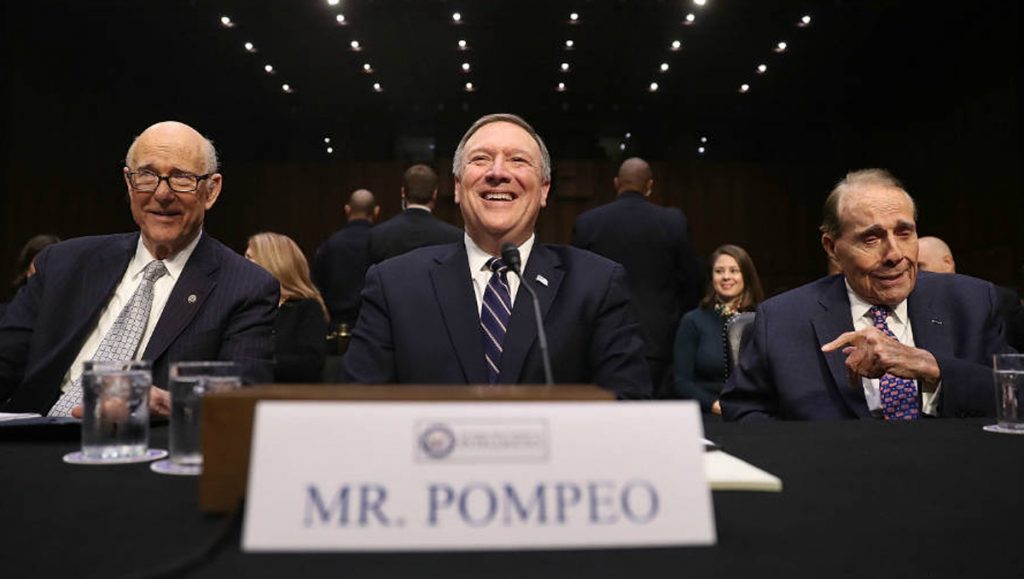 SHARMINI PERIES: It’s The Real News Network. I’m Sharmini Peries coming to you from Baltimore. After a series of ongoing riffs with Secretary of State Rex Tillerson, President Trump fired his top diplomat by demanding his resignation.

REX TILLERSON: All of us, we know, want to leave this place as a better place for the next generation. I’ll now return to private life, as a private citizen, as a proud American, proud of the opportunity I’ve had to serve my country.

SHARMINI PERIES: The riffs with President Trump are reportedly over Russia, Iran, and the new agreement for talks with North Korea, of course, one cannot ignore if the President’s decision was influenced by Tillerson once calling him a moron. Taking on the new reins at the State Department will be CIA director, Mike Pompeo. On to discuss Mike Pompeo and his new reign at the State Department, is Lisa Graves. Lisa is the co-director of Documented, which investigates corporate influence on our democracy. She’s also a senior research fellow at the Center for Media and Democracy. Lisa, good to have you here.

LISA GRAVES: Thank you so much. Thanks for having me on.

SHARMINI PERIES: Lisa, what do you know about Mike Pompeo and what concerns do you have about him taking up office as Secretary of State?

LISA GRAVES: Well, Mike Pompeo is someone who was a former Congressman who has deep and close ties to the Koch Brothers. He’s someone who, after he graduated from law school and worked for a couple of years as an associate at a law firm, basically, was staked by Kochs and also by Mitt Romney’s firm, Bain & Company, in a business that he started in Wichita, called Thayer or Thayer Holdings and while, Mike Pompeo has said that the Koch’s only invested perhaps 2% of the 90 million dollars that they raised in that initial fundraising. There’s actually no documentation of how much, how long, and how deep the Koch investment was for him in Wichita in that business enterprise. And then we know that after he left that business one of the things that he did was volunteer his time to work for the Koch Think Tank there in Wichita and worked side by side with Charles Koch’s right hand man, his first sort of conciliatory, a man named George Pearson. And so, Pompeo is deep in the Koch network, in fact, when Pompeo ran for Congress initially, the Kochs backed him over three other candidates and helped him get promoted through their Prosperity Network.

This is a man with deep and close ties to the Koch Brothers and their operations and he has basically defended them at every turn.

SHARMINI PERIES: All right Lisa, tell us a little bit more about the hand that the Koch Brothers and ALEC will have in foreign policy now that they’re going to get a run at it.

LISA GRAVES: Well, that’s a good question. I think it remains to be seen how much of their claims about their foreign policy positions are real versus how much is just rhetoric because, quite frankly, we’ve seen in other scenarios where they’ve talked about how, or at least David Koch has talked about how, for example, he’s pro choice and yet he, himself, has backed numerous anti choice candidates. They’ve sort of claimed this libertarian perspective but, in reality, they’ve backed extreme right wing politicians and so it’s not clear what they’re true position is. What is clear is that Mike Pompeo has been someone who’s been a staunch defender of theirs and an ally of theirs even though Mike Pompeo in sort of a slippery way said, he’s not actually calling Charles Koch to get his opinion about every specific matter. So, we’ll see. I think one of the things that is important to know is that whoever is confirmed to be the Secretary of State is fourth in line to become the President of the United States should there be a change at the top.

SHARMINI PERIES: All right, and before you go, Lisa, give us your outgoing thoughts about Rex Tillerson and his departure from the State Department.

LISA GRAVES: Well, the State Department has been decimated in many ways under Rex Tillerson’s so called leadership but he has had the occasion to speak contrary to what Trump has wanted, most recently it seems, in response to the situation in Britain in terms of Russia, but he’s someone who does not have a great tenure at the State Department, many positions are unfilled and his agenda there has been one largely, obviously, of the Trump Agenda, with a few notable and very recent exceptions. I do hope if Pompeo goes before the Senate again, that he’ll be asked questions and asked for documentation about his role and deep relationship with the Koch Brothers. Rex Tillerson did not get, I think, as many questions as I would have liked when he was confirmed.

SHARMINI PERIES: All right, I just want to take this opportunity, I think I have you for a few more minutes there, Lisa, if you were sitting on that committee, what are the questions you would be asking him?

LISA GRAVES: I think to the documents, who invested in him? How long did the Koch’s invest in him? How much money was it originally versus just what was stated to the press? I think those are important questions. I also think there are other important questions beyond the Koch Brothers in terms of US policy regarding human rights. Obviously, Pompeo who has a very anti human rights sort of perspective as a Congressman embracing torture. He’s someone who has said in early interviews when early… Iran is someone who he worships or is someone he follows those beliefs and so I think that there are a lot of good questions to place at Mike Pompeo including most importantly for the sake of our planet and our future, what his view is going to be in terms of dealing with climate change and the devastating changes that are underway.

SHARMINI PERIES: And as far as you know, Lisa, the influence of the Koch Brothers and ALEC has had in terms of our environmental policy, mainly, withdrawing from the Paris Agreement, would you say largely comes from position papers developed by ALEC?

LISA GRAVES: I would say from ALEC and the Koch funded ALEC, as well as a number of the groups that the Koch’s have funded over the years to really attack our power as people and our democracy to regulate corporations, and protect our environment, protect our planet, have cleaner air and water. The Koch’s have mounted a multi year, multi decade campaign against the power of we the people in our democracy. They’ve called it limited government, and when you hear those words you ought to be thinking that what does that mean to the Koch Brothers want limited democracy. The limited power of you or me to make sure that corporations are accountable to we the people versus being able to do, largely, whatever they want or whatever they command as the Koch Brothers have sought, as they’ve sought to eliminate key powers of our federal government and state governments and as they sought to weaken the ability of the government to opt…through the courts to regulate corporations.

SHARMINI PERIES: All right Lisa, I will let you go for now. I know you’re on your way to catch a flight, but we do hope you join us again because as this appointment gets confirmed and we are into the hearings, I would love to have you back.

LISA GRAVES: Thank you so much. Thanks for having me on.

Lisa Graves is the Executive Director of the Center for Media and Democracy and publisher of ExposedByCMD.org and PRWatch.org. CMD is a national watchdog group that conducts in-depth investigations into corruption and the undue influence of corporations on media and democracy.

Trump’s Iran Treaty Withdrawal and Sanctions Based on Lies, but War Could Be a Reality