New Oil Sanctions on Venezuela: “Would Destroy What’s Left of its Economy”

National Security Advisor John Bolton announced that the US will freeze Venezuelan assets and block oil payments for Venezuelan oil imports to the US. This would not only be illegal, but would also be yet another crippling blow to the country, says CEPR's Mark Weisbrot

National Security Advisor John Bolton announced that the US will freeze Venezuelan assets and block oil payments for Venezuelan oil imports to the US. This would not only be illegal, but would also be yet another crippling blow to the country, says CEPR's Mark Weisbrot 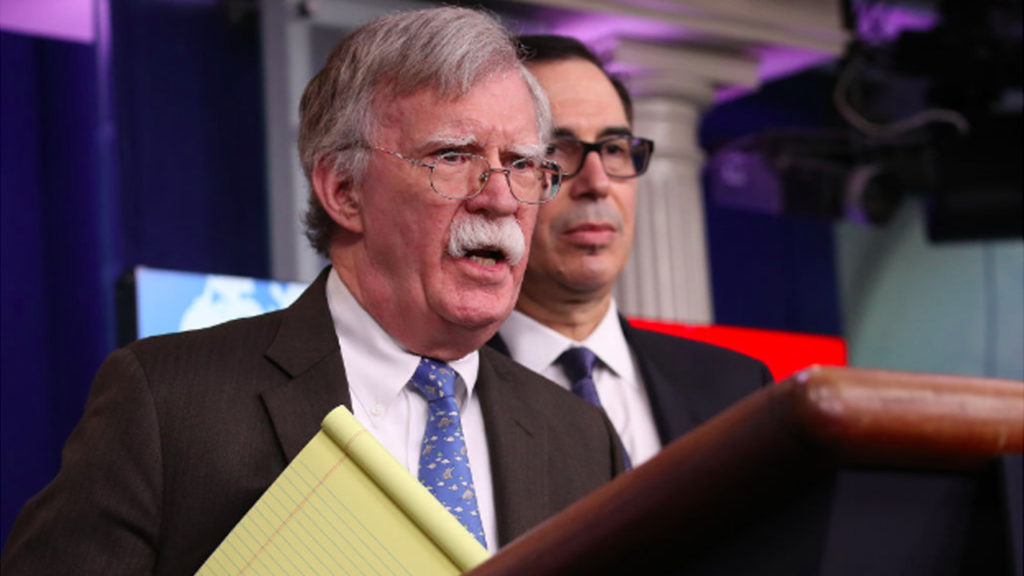 U.S. National Security Adviser John Bolton announced on Monday that the U.S. will, in effect, slap an oil embargo on Venezuela. Speaking from the White House, this is what he had to say.

JOHN BOLTON: We are going to announce sanctions against Petroleos de Venezuela, PDVSA, the state-owned oil monopoly of Venezuela. We have continued to expose the corruption of (Venezuelan President Nicolas) Maduro and his cronies and today’s action ensures they can no longer loot the assets of the Venezuelan people. We expect today’s measure will total $7 billion in frozen assets and $11 billion in lost export proceeds over the next year.

SHARMINI PERIES: Now, in response, Representative Tulsi Gabbard wrote: “It is about the oil again. Bolton just exposed a real motive for intervention in Venezuela.” Then she quotes Bolton, saying “We’re in conversation with major American companies. Now, it would make a difference if we could have American companies produce the oil in Venezuela. We both have a lot at stake here.”

NICOLAS MADURO: John Bolton announced today, just an hour ago, a group of measures called sanctions that are unilateral, illegal, at the margins of the United Nations Security Council. They are illegal, unilateral, immoral, criminal. With this measure, they intend to steal the company Citgo from all Venezuelans. (Be on) alert Venezuela, the United States today has decided to go down the path of stealing the company Citgo from Venezuela, and it’s an illegal path.

SHARMINI PERIES: The United States is the largest importer of Venezuelan oil; about 500,000 barrels per day, most of which goes to the Venezuelan-owned oil company Citgo. The loss of the U.S. export market would be a tremendous blow to Venezuela’s oil income. According to Bloomberg, the sanctions against Venezuela’s oil company will likely have ripple effects that make it difficult and impossible for it to export oil to other countries, as well. In other words, make the economy scream.

Joining me now to discuss all of this and the sanctions on Venezuela is Mark Weisbrot. Mark is the co-director of the Center for Economic Policy Research. Thanks for joining me, Mark.

SHARMINI PERIES: All right, Mark, now, these latest sanctions on Venezuela are meant to pressure President Nicolas Maduro into resigning. Now, according to Venezuela’s opposition, Maduro is illegitimate, and the new president of the National Assembly, Juan Guaido, should be the country’s new president instead. Just how much economic pressure will these latest sanctions create, and what kind of turmoil will this mean for the Venezuelan economy?

MARK WEISBROT: Well, it’ll be a huge blow to the economy. And you know, the economy’s already shrunk by about 50 percent in the last five years. That’s the worst depression recorded in Latin American history. And even before the sanctions were announced, just on the news of the recognition of a parallel government, economist Francisco Rodriguez, who’s the economist who probably knows the Venezuelan economy better than anyone in the world, he works for–he’s chief economist at Torino Capital, a Wall Street investment banking firm. And he estimated, he had estimated that the economy would shrink 11 percent a year, and he upped that to 26 per cent shrinkage of the economy this year, which is Great Depression levels. Actually more than that if it happens in one year.

And this would just destroy what’s left of the economy, and it would kill a lot of people. I mean, the embargo has already killed many Venezuelans, because this is the source of dollars for the Venezuelan economy, and that’s what’s used to import medicines. You know, when when the government had money there were about $2 billion worth of medicines being imported, and the sanctions already took $6 billion out of oil production. And this would knock off about, again, the decision to recognize the parallel government would knock about half of their oil revenue off over the next year. And so that’s what they’re–the numbers you’re talking about are enormous. They’re basically all the remaining imports that the country could have. So for sure that will kill a lot of people if they actually do it.

SHARMINI PERIES: All right, Mark, now, there are some rumors out there that the money that has been frozen in terms of Citgo and whatever money the U.S. could access in terms of Pdvsa Holdings has been funneled to Juan Guaido, so that he could use this money. And Maduro was, of course, in that statement saying all of this is illegal. Respond to the legality of all of this, if you can. And if you cannot, how real is this? What do we know about these funds being funneled to Guaido?

MARK WEISBROT: Well, it’s all illegal, of course. I mean, the sanctions that Trump imposed in August of 2017, or you can go back further to the Obama sanctions in March of 2015, the sanctions have always been illegal under the OAS Charter, under the UN Charter, under the treaties that the U.S. has, various international conventions that the U.S. is a party to. And also under U.S. law, because the president has to state in order to impose these sanctions in the executive orders going back to 2015, both Obama and Trump, have had to say that, under our law, that Venezuela poses an unusual and extraordinary threat. To the national security of the United States, which everyone knows is false. And so on that basis it’s really not even legal under U.S. law, because the president is stating something false in order to comply with the law.

SHARMINI PERIES: All right, Mark, so what recourse does the Venezuelan government, or Maduro, have at this point? Is there any way they can circumvent and minimize the effect this will have on the economy?

MARK WEISBROT: Well, they’ll have to sell oil elsewhere. They’ll have to try and get help from elsewhere. They’ll have to redirect their exports. I don’t see really how. I don’t really see what they can do to without some help from other countries. I don’t see what they can do to make up for this kind of terrible blow to the economy. And of course, that’s the purpose of it. You know, for the past year or two, or more, there has been this narrative in the media that all of this is directed to pressure the Maduro government, the Venezuelan government, to do certain things. Now, the latest has been to hold new elections. Previously it was other demands.

But this was never true. The purpose has always been to increase the suffering in Venezuela to the point where the government’s popularity falls so much that the military intervenes, or somehow, through violence, the government is overthrown. That’s the–that’s the actual strategy. And it’s, of course, become much clearer now.

SHARMINI PERIES: Right. I guess the point is to make the economy scream. This is just another way of tightening the grip around Venezuela. Now, there’s a Lima Group meeting that is taking place on the fourth of February in Ottawa, Canada. And of course, this would be on the topic for conversation. What do you predict will happen between now and when that meeting will take place?

MARK WEISBROT: Well, you know, the international context is very important. I think it’s important for people to understand, because again, the media narrative is kind of a clash of civilizations narrative. On the one side you have this so-called authoritarian government in Venezuela, and you have China, and Russia, and Turkey recognizing the government. And then you have the so-called democratic countries. But the Latin American countries that are aligned with the U.S. are almost all right-wing governments that are doing what the U.S. wants.

And in Europe it’s very interesting, too, because you have now Germany, and France, and the U.K., and Spain all gave this ultimatum, this eight-day ultimatum. And this was the result of one person really being flipped, which was the prime minister of Spain, who the other–some of the other countries, especially Germany, tend to follow on Latin America. Pedro Sanchez, who was opposed to the Trump sanctions, decided to go over to the Trump side. Who knows what the pressure was, or what they offered him.

So this is really kind of a coalition of the willing, like in the Iraq war. It’s not this clash of civilizations at all that’s presented in the media. And if you go back to 2013, you can really see this. Because in 2013, Maduro won the election, and there was absolutely no doubt about it whatsoever. No doubt about the vote count, no doubt about the election. And everyone in the world recognized it, except the United States. And at that time they had just the right-wing government of Spain and the head of the OAS. And then those two peeled off, and it was only the U.S. by itself saying this election was not valid and the president was not legitimate. And that–and then they had to give in.

So you see, even when the whole world recognized the election, the U.S. tried to side with the opposition, who was in the streets with violent protests, trying to topple the government even though there were no doubts about the election whatsoever. So this is just–this shows you how fake the whole thing really is. It has nothing to do with elections, or democracy, or this clash of civilizations that they’re creating. It’s just about the same regime change that they’ve been trying to do for 17 years.

SHARMINI PERIES: All right, Mark, we’ll leave it there. I thank you so much for joining us. And I’m sure there will be plenty more opportunities in the near future to talk to you about what’s going on in Venezuela. Thank you for now.