Sometime later this year NAFTA 2.0, the US-Mexico-Canada Agreement (USMCA), is supposed to go into effect. Is it an improvement over the old NAFTA in any way? We speak to long-time NAFTA activist Lori Wallach of Public Citizen's Global Trade Watch

Sometime later this year NAFTA 2.0, the US-Mexico-Canada Agreement (USMCA), is supposed to go into effect. Is it an improvement over the old NAFTA in any way? We speak to long-time NAFTA activist Lori Wallach of Public Citizen's Global Trade Watch 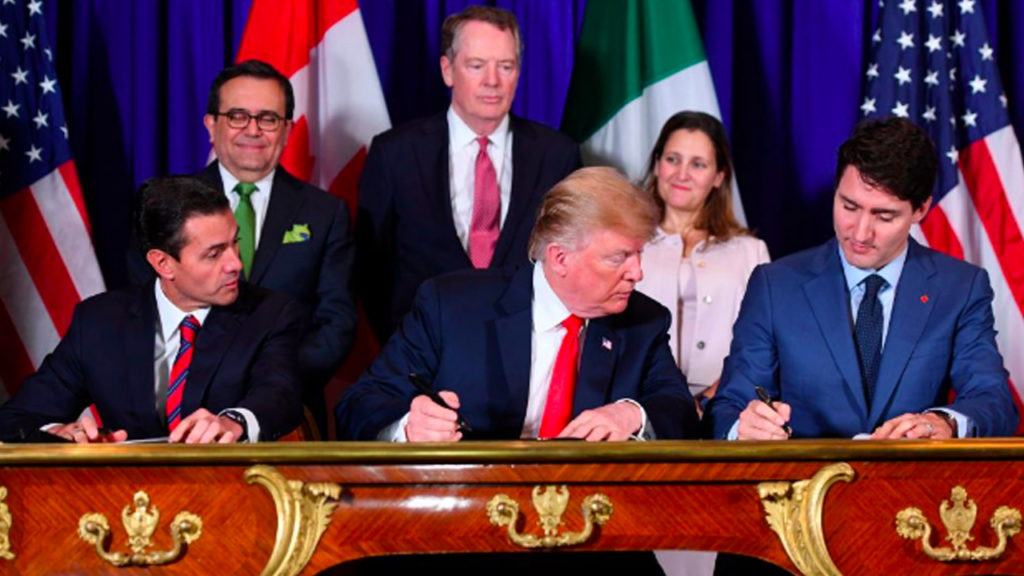 This January 1, 2019, marks the 25th anniversary of NAFTA, the North American Free Trade Agreement. I’m joined by Lori Wallach, the director of Public Citizen’s Global Trade Watch, who has been working on NAFTA, and also on the new NAFTA, on which she just recently published two reports, one of them dealing with the new NAFTA. This is Part 2 of our discussion about the new and the old NAFTA. Thanks for joining us today, Lori.

GREG WILPERT: What would you say are the main problems in this new NAFTA, or NAFTA 2.0, as you’re calling it?

LORI WALLACH: In the balance of things, the way this agreement, I would say is, it is the good, the bad, and the incomplete. And you heard about some of the good. The incomplete is the labor and environmental standards, because the environment standards need to be strengthened. The labor ones could use some strengthening, too, but there are some real improvements there, meaningful changes. However, neither the environmental nor labor standards are subject to the appropriate monitoring, or swift and certain enforcement mechanisms that are necessary for the standards on paper to actually translates into changing people’s lives.

Then you have the thing that’s really worse, and that is the big pharmaceutical companies got goodies put into this agreement by Trump. The agreement includes a set of monopoly rights, including, for instance, a 10-year guarantee of market exclusivity for biologic drugs, the cutting-edge medicines for cancer, that will lock in place higher prices. So all of the new reform proposals that say Democrats are pushing to bring down drug prices by bringing in generic competition, those would be made illegal trade barriers by these terms.

So the work going forward is to make sure the good stuff stays in and gets improved. The stuff that’s halfway done they improve to actually make the labor and environmental standards enforceable. And that the bad stuff, the giveaways to big pharma that would lock in high medicine prices, that stuff has to go out. That kind of a package would actually be better than no NAFTA, because that kind of package would help raise wages in Mexico, which would be good for people there, but also stop the biggest incentive for outsourcing. It would end the corporate attacks on the environmental and labor laws, and it would make sure that the big pharmaceutical companies don’t get a free ride on a free trade agreement to actually have bigger monopolies and higher prices.

GREG WILPERT: What I’m wondering, though, is now, of course, this next step would be for the agreement to be ratified in the U.S. Congress. Now, do you see any kind of movement on the part of, let’s say, Democrats or other members of Congress to generally improve this deal in the direction that you’re indicating?

LORI WALLACH: Yes. So what happened in response to the signing of the NAFTA on November 30 wasn’t the usual situation, where the unions and Public Citizen and the Progressive Democrats launch a campaign to kill the agreement. Instead, because there are some important improvements such as the labor standards, which is they were made enforceable, would be better known than having no NAFTA at all. That would actually bring up wages. It wouldn’t just be getting rid of NAFTA. So people see there are things to be harvested. There are progressive demands; getting rid of [ISDS]. This is all possible, but only if the improvements are made.

Uniformly from the Democratic leaders, Pelosi, and Schumer, Bernie Sanders, and Elizabeth Warren, and Mark Pocan, and Rosa DeLauro, and the unions, and Public Citizen, what folks all said is, hey, you made some progress. But there is more that needs to be done before this agreement is going to even stop the ongoing damage. So you have to create swift and certain enforcement of the labor and environmental standards. You have to strengthen the environmental standards. You’ve got to take out the outrageous goodies from Big Pharma that would lock in high medicine prices. And if you do reform, improve, repair, and if there is an agreement that actually meets these important improvements, well, then that is close to some of the things Democrats have always asked for, and of course they’d be willing to support what they’ve asked for. That’s the kind of agreement that can get through the Democratic House.

After the election, the only NAFTA redo agreement that’s going to get passed is one that actually meets these Democratic demands, which means the current agreement’s going to have to get improved. And a dirty little secret is over half of our current free trade agreements have been sent back for renegotiation after they were signed, simply because they couldn’t get through the Congress as-is. So I suspect the next real phase in the agreement is not going to a vote to pass it, but rather it’s a discussion between the administration and the House Democrats about what needs to be improved, and then a discussion between the administration of Mexico and Canada about how to do that. And then at some point, probably in the late spring, we’ll see the final package. And then we’ll know if it’s an agreement that deserves support or not.

GREG WILPERT: OK. Well, I hope we can have you on again once we have a clear idea as to which direction this is going. But we’re going to have to leave it there for now. I was speaking to Lori Wallach, director of Public Citizen’s Global Trade Watch. Thanks again, Lori, for having joined us today.