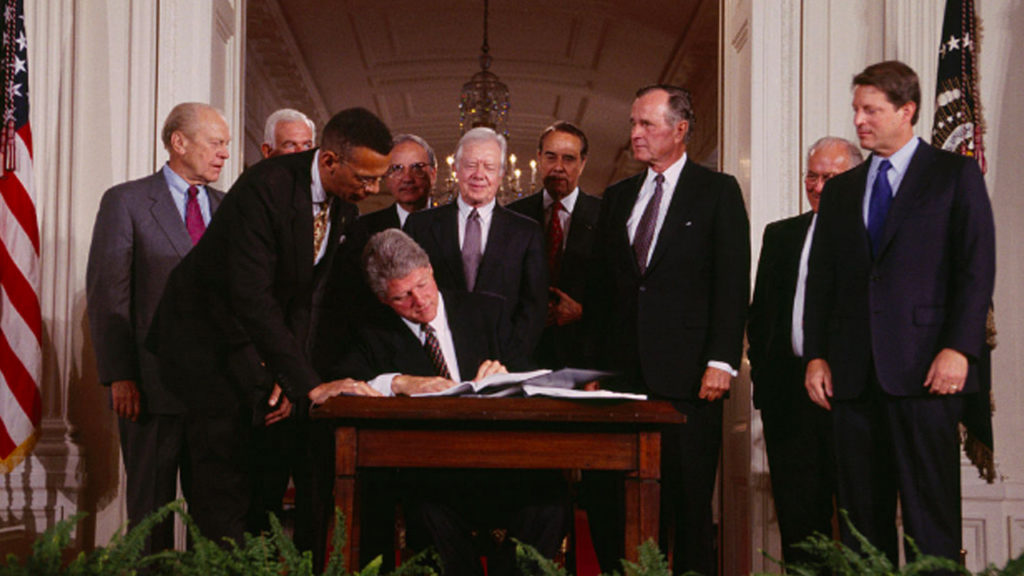 January 1, 2019 marks the 25th anniversary of NAFTA, the North American Free Trade Agreement. Coincidentally, shortly before this anniversary, on November 30, the President of the United States Donald Trump, of Mexico, Enrique Pena Nieto, and Canada’s Prime Minister Justin Trudeau signed a new NAFTA, a NAFTA 2.0, which was officially called the U.S.-Mexico-Canada Agreement, or USMC. Trump had threatened to withdraw from the old NAFTA if a new one is negotiated. Then after signing the new one last November, Trump and his administration praised the new agreement. Here’s what Agriculture Secretary Sonny Perdue had to say about the new agreement.

SONNY PERDUE: And this renewed NAFTA USMCA agreement is better in virtually all aspects than the previous NAFTA. And we need this agreement. I think when Congress really looks at it they’ll look for worker protection, for everything else. It’s vastly improved even for agriculture. Access to Canada’s markets is improved. This is a better deal than we had. That’s what President Trump promised, and he’s presented a better deal.

GREG WILPERT: Is the new NAFTA really better than the old one? Joining me to analyze this issue is Lori Wallach. Lori is someone who has studied and organized against the old NAFTA ever since it went into effect in 1994. She is the director of Public Citizen’s Global Trade Watch, and just published two reports: one on the old NAFTA, which can be found on the Public Citizen website, and one on the new NAFTA, which was recently published in the magazine the Nation. Thanks for joining us today.

GREG WILPERT: So, let’s start with the old NAFTA; NAFTA 1.0, if you will. What would you say are the main takeaways from it 25 years after it went into effect?

LORI WALLACH: The big picture is that none of the rosy promises of the original NAFTA’s boosters actually came to be. Instead the concerns that critics of NAFTA–which were unions, and consumer and environmental activists, and family farm and faith group activists, Democratic members of Congress–their concerns became the reality. So we were promised that NAFTA would create 1 million new American jobs just in its first five years alone. Instead there are almost 1 million specific U.S. jobs certified by the U.S. Department of Labor as lost to NAFTA, and that is just under one narrow program. That is a big undercount.

We were promised higher wages. Instead we saw in the U.S. that wages are flat, because as we lost a million manufacturing jobs, those workers went to the service sector, where wages are at half the level. And not only does it show that their wages went down, there’s a powerful Bureau of Labor Statistics study that prove that empirically, but the workers in those growing service sectors, the non-outsourced Sipple sectors. With all the new workers flooding in their wages stayed flat and in Mexico. Wages actually went down. Real wages, annual wages, in Mexico are 2 percent lower than before NAFTA, which is really scandalous because in 1993 the wages in Mexico were very low. Wages in Mexico are now 40 percent lower than in manufacturing in China, to put this in perspective. Not livable. Obviously not fair.

Or we were told NAFTA would be a boon for farmers, that we’d have basically new income for small farmers. Instead we went from a NAFTA trade surplus–the U.S. sold $2.3 billion more agricultural goods to Mexico and Canada before NAFTA. We’ve now gone to a $6 billion deficit. And we have in that period lost 210,000 small farms. Small farms got clobbered the worst. We were told that NAFTA would improve our trade balance with Mexico and Canada. We had a small deficit with Canada and we had a small surplus with Mexico. Instead now last year we had $177 billion deficit in goods. And in the service sector we were told that was where we were really going to win. Service sector trade growth has actually slowed to half the rate before NAFTA. So the overall deficit of goods and services has exploded 500 percent.

So on basically almost every measure—jobs, standards of living here and in Mexico, what would happen to farmers, what would happen with the trade deficit–and then finally we were told environmental and consumer laws would not be challenged. So environmental consumer groups oppose NAFTA, because they thought with all these new corporate rights in that agreement we’re going to see important laws attacked. And now, 25 years later, $392 million has been paid out to corporations by governments in North America after successful investor state tribunal attacks on our environmental and health laws. We’ve been required because of other trade cases to allow access to all North American highways to trucks that don’t meet environmental or safety standards. We’ve seen the country of origin labels that we used to use in grocery stores and meat wiped out as a legal trade barrier after challenge by Mexican and Canadian cattle guys

So we’ve seen exactly that outcome that we have been told wouldn’t result. And the final, final thing is at the time of NAFTA debate the Mexican President Salinas said, we want to export goods, not people. You should do NAFTA because it will mean less migration from Mexico to the U.S. And then President Bill Clinton said something like if we raise wages in Mexico, there’ll be less of an interest for people to have to come here to seek work. Well, the opposite of what was promised happened, of course. The wages in Mexico went down. Almost 1 million small farmers in Mexico lost their farms to dumping of U.S. subsidized corn. The result was that undocumented immigration soared from a level of about 2.5 million undocumented people from Mexico were here the day before NAFTA started, and at the at the end of 2017 the number was almost 6 million people. And it’s a lot of people who basically got pushed into making the dangerous journey because their livelihoods were destroyed by NAFTA. So very ugly picture. No doubt that across the political spectrum a lot of Americans were very ready to have NAFTA renegotiated.

GREG WILPERT: Well, now the Trump administration, as we just saw, promised that the new NAFTA, or USMCA, as it’s being called, would be better. So let’s first take a look at the main positive elements, if any. Are there any improvements in the new agreement?

LORI WALLACH: Well, let me start with one thing, which is when the president talks about this, when he talks about this agreement, he is making the same crass oversales that, say, President Clinton did originally. And on TradeWatchdog.org, our website, we have a really good infographic that has video of both of them. And they say almost the same things, which are just unrealistic. So let me just start by saying even if there was a good replacement of NAFTA that, say, unions, or groups like Public Citizen, or progressives in Congress would support, it still wouldn’t deliver the ridiculously grandiose magnificent things that that Trump is claiming. We’re not going to have all of the lost auto jobs, a half a million auto jobs that were lost, they’re not all coming back. Yes, we could create more manufacturing jobs here. But he is overstating it.

And the agreement doesn’t get a new name. He’s trying out this USMCA rebrand. Well, that’s just not what it is. It’s NAFTA 2.0. It is not the transformational replacement of the corporate-rigged model of NAFTA, but it is in some ways improved relative to the original NAFTA. The biggest thing is the investor state dispute settlement regime under which corporations can sue governments in front of tribunals of three trade lawyers. The lawyers can order the governments to pay unlimited compensation of our taxpayer money for any claim that a corporation makes that their special rights and privileges under NAFTA have been undermined by a domestic environmental law, health regulation, court ruling. The three lawyers decisions are not appealable, and almost $400 million is paid out under that regime, and attacks the environmental health laws, tax expands, energy policies.

So that outrageous system with the U.S. and Mexico has totally gotten rid of, and with respect to Mexico is largely walked back, that only a limited set of claims can be made, and only if a company has gone first to the domestic court systems, has spent–has basically gotten a final ruling from the highest court, or spent two and a half years trying to exhaust the domestic remedies. And then the big set of corporate rights claims aren’t allowed anymore. They can get money back if literally the government seizes their property through an expropriation and doesn’t pay them back.

So that’s an improvement. There is a caveat to that, that still needs to be narrowed, but that’s a very big deal. And that actually sets a new floor so that if this kind of corporate-friendly administration is going to whack those outrageous investor tribunals and the corporate rights, it would be really hard even for sort of a corporate-friendly Democratic administration to go back and restore that. So that’s a really big improvement. Another important improvement is the agreement got rid of these outrageous natural resource mandatory export rules. Those are called proportional sharing. And if a country started to export lake water, or gas, or oil, or anything, timber, then it had to continue those exports even if it sought to consume to implement conservation policies, and keep it exporting based on the average of the three previous year sales. So that’s gone. That was a big environmental group demand.

Added in is the first wage standard in any trade agreement. So part of what are overall improved rules of origin–those are the rules that determine whether a good gets duty-free treatment under an agreement–so first that rule changed so it’s stronger, which means less goods that have a lot of value from, say, China, or a country that wouldn’t have to meet the other NAFTA labor and environmental rules, those products can’t come in anymore. Right now a product that’s half the value, say, from China, can be a NAFTA product. Under the new agreements, the value of a car would have to be 75 percent North American. But then there’s a separate standard that says and addition for 40 percent of the value of a car and 45 percent for the value of a light truck, it has to be made by a production worker who makes an average $16 an hour. And this link between a set wage and market access is the first time ever for a trade agreement. Something unions have been pushing for forever.

So there are complications with that. For one thing, that number, $16 an hour, isn’t inflation adjusted, so it would have less value over time. But that that’s an important improvement as to how the agreement gets rid of those crazy rules that were in NAFTA that forbid us to set environmental and health and safety standards for cross-border trucks, and for that matter licensing and insurance standards for drivers. So as a sort of consumer safety and environmental issue, that’s an important improvement. And then there are labor and environmental standards that are in the agreement, not in the useless side agreements.

In the balance of things, the way this agreement, I would say, is the good, the bad, and the incomplete.

GREG WILPERT: OK. Well, this concludes Part 1 of our interview with Lori Wallach, director of Public Citizen’s Global Trade Watch. Join us for Part 2, where we go into greater detail about what needs to be improved in the new NAFTA.