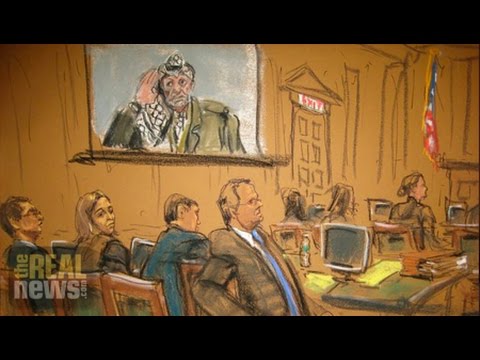 SHARMINI PERIES, EXEC. PRODUCER: I’m Sharmini Peries, coming to you from Baltimore. Welcome to this edition of the Michael Ratner report.

Last week, Michael Ratner’s report was on the trial against the PA and the PLO in New York and its verdict. The piece was titled “Prejudicial Trial, Prejudicial Verdict: $218 Million”. Michael Ratner is joining us today from New York to provide us an update and draw some parallels between this case and similar trials that has taken place against Israeli state in the U.S. But Michael Ratner will draw some different conclusions.

Thank you so much for joining us today, Michael.

MICHAEL RATNER, PRESIDENT EMERITUS, CENTER FOR CONSTITUTIONAL RIGHTS: Thank you for having me, Sharmini, and thanks again to The Real News for covering this and other important topics.

PERIES: You’re most welcome, Michael. What do you have in form of this case? You want to add to what you did last week.

RATNER: I want to do two things. We have a verdict the case, and then I want put in the context of some of our efforts at the Center for Constitutional Rights to litigate issues against Israel, having to do with war crimes and accountability for its war crimes.

As I predicted in that talk we had last week, that this was an utterly biased proceeding that should not have taken place at all. And I predicted there would be a verdict against the Palestinian Authority. And, unfortunately and sadly, the expected verdict did occur on February 24. It was a jury trial, and the jury came back with a verdict of $218.5 million against the Palestine 1991 Antiterrorism law. That amount, over $200 million, is tripled. So the verdict now is $655.5 million, two-thirds of a billion dollars.

But think about this. The United States, perhaps not known to many of the viewers, gives hundreds of millions of dollars a year to the Palestinian Authority so that it can survive as a government, pay its officials, etc.

And the question is: will those hundreds of millions of dollars continue? The U.S. has tried to hold it up in the past over things like the International Criminal Court and other issues, but now they have this–or will have a judgment against them for this $655 million. It will be appealed [incompr.] Republican Congress, or even a Democrat one if it got to that. Will they not simply say, this judgment has to be paid, and we’re not going to pay the Palestinian Authority with U.S. taxpayer money until we pay off the victims of this attack? So that’s one way in which the plaintiffs in this case, U.S. citizens who were killed in the attack, could collect.

But Israel has in the past threatened and has done and may well do again until this judgment is paid, it may hold back those customs receipts and simply say, we’re holding them back, and we’re going to pay them the victims the judgment. So it’s not completely illusory that the plaintiffs in this case might collect that money. So the case has some meaning in that sense, but it has a broader meeting in terms of our whole look at Israel and Palestine, and who fares with [incompr.] in the course of many other areas of our United States.

Recently I was reading an article in The Jerusalem Post, and they must have picked up on our show last week on The Real News, because they quoted me and they said in the article, how come so few human rights lawyers–referring to me and some others–how come no human rights lawyers or groups are praising the verdict is a victory for human rights? Again, this is the verdict against the Palestinian Authority by some people who were victims of killings and bombings in 2002 to 2004 in Palestine.

In a sense, it’s not hard to answer why human rights people, particularly me and others, haven’t praised that verdict. And as I said last time and I’ll repeat clearly, the trial was a concrete demonstration of this country, the United States’s utter hypocrisy on the issue of who gets justice, Palestinians or Israelis. Palestine and Palestinians never get justice. U.S. courts are close to their efforts at justice, despite the murders and killings by Israel, on a scale much more massive than those at issue in this trial. Just think about Gaza–500 children killed in the last attacks this summer, three attacks killing thousands, thousands of civilians. No accountability for that.

So when it comes to Palestine, our courts are closed for accountability against Israel. But our courts are wide open to Israel and its supporters when it’s them going after Palestine and Palestinians. The courts in our country, in the United States, will bend over backwards to hold Palestine libel. And if they can’t, if for some reason the law says you can’t do that, then who will step in here? Our Congress will step in. And as they did here, it will pass laws and statutes that give the courts laws that allow people in the United States, citizens, to sue Palestinians. But those laws will exempt Israel.

Last week, I gave some of the reasons this trial should not have occurred at all. Briefly, Palestine should have been treated as a state and immune from suit just like Israel is. There was no jurisdiction over Palestine. It hardly has enough contacts in the United States to let a court rule. There’s no link between those carrying out the killings and the Palestine Authority. And in the context of the United States, a fair trial was impossible. There was no way a fair jury could be impaneled in the United States.

I want to step back for second and tell about my experiences with the Center for Constitutional Rights and our efforts to hold Israel legally accountable. I want to share three cases so that we can put what happened in this trial against the Palestinian Authority into context.

The first case is the Rachel Corrie case, which The Real News covered last week, as to what happened in Israel with that case and the failure of Israel to even examine what the Israeli Defense Forces did in the killing of a young woman, Rachel Corrie, by bulldozers. Remember, she was standing in front of a bulldozer to prevent a house demolition. She was a U.S. citizen like those citizens who were covered in the Sokolow case that we opened this segment with.

But did she get justice in the U.S.? Absolutely not. Recall she was killed by a Caterpillar bulldozer leveling a house. She was trying to prevent that demolition. In the U.S., we at they Center could not sue Israel. Israel’s immune from suit, like other states that the U.S. recognizes. So we sued Caterpillar, Caterpillar for exporting specially equipped bulldozers with huge blades on them, giant Caterpillars that are used for house demolitions. Israel uses those caterpillars to demolish houses, and those are war crimes. They endanger civilians as they did, and they killed Rachel Corrie and others. And Caterpillar, when they exported those, they knew, they knew how those Caterpillar tractors would be used for house demolitions.

We lost that case in the U.S. courts in a remarkably outrageous decision. How did we lose it? What the courts said is these Caterpillar tractors were exported for pursuant to a license given by the United States executive, by the president, the State Department, the Commerce Department. And therefore they were licensed. And we as a court will not second-guess the president, or, really, the executive, on questions of foreign policy, and the court won’t go against that.

So if you look at the ruling in that case, it’s this: the president can authorize gross violations of human rights, especially by Israel, and a court will look the other way. And Caterpillar can continue doing business selling demolition tractors, killing machines, to Israel. That’s case one.

Case two: the Avi Dichter case. Avi Dichter, an Israeli official responsible for the dropping of a one-ton bomb on a Gaza house in 2002, killed 15 people, eight children, 150 injured. We brought suit in the United States court against Avi Dichter when he entered the United States. We sued him when he came in.

PERIES: And you said you had a third case.

RATNER: Yes. The third case is this. The Center represented the people killed, or particularly a Turkish-American citizen killed in the Gaza flotilla in 2010. Israel, as people recall, attacked the Mavi Marmara, and there were nine people killed. One was a Turkish-American citizen. You would think, like the people that we talked about when I opened the segment, the American citizens killed, supposedly, by Palestinians in Israel, that American citizen, the Turkish man–I mean, the man who was killed on the Mavi Marmara, could sue in the United States. But, of course, unlike the U.S. citizens in the Sokolow case who did go to court, the PA–and found that the PA was not a state, this Turkish American could not, because Israel is immune from suit, and therefore they could not be sued. And this was despite a finding by the International Criminal Court prosecutor that war crimes were committed by the Israeli Defense Forces on that boat, the Mavi Marmara. Our client was on that boat.

So look at these three cases. In none of those cases were Palestinians able to recover.

PERIES: Michael Ratner, from the Center for Constitutional Rights in New York, thank you so much for joining us and elaborating on this case.

RATNER: Thank you for having me on The Real News, Sharmini.