Todd Miller, author of a new report on the border-industrial complex, discusses the history of US border policy and the involvement of military and surveillance corporations.

Todd Miller, author of a new report on the border-industrial complex, discusses the history of US border policy and the involvement of military and surveillance corporations.

More Than a Wall: A History of the Border-Industrial Complex 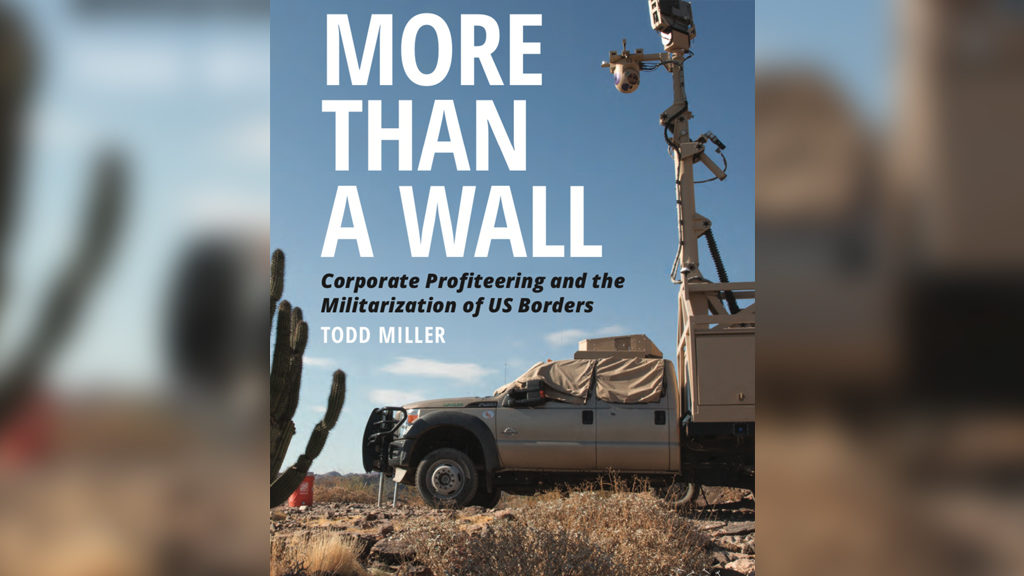 President Trump continues to highlight the signature project of his presidency, his border wall between the US and Mexico. Here’s one of the recent comments Trump made about the wall on Thursday in Otay, California.

PRESIDENT DONALD TRUMP: This is going to be close to 500 miles by the time we finish. Those are the areas that are most important. This is your maximum that you can do, and one thing we haven’t mentioned is technology. They’re wired so that we will know of somebody trying to break through, and you may want to discuss that a little bit, General.

GENERAL TODD SEMONITE: Certainly, there could be some merit in not discussing that.

PRESIDENT DONALD TRUMP: Okay. I like that. I tell you this very strongly. No more people can come in. So now, we have a world class security system at the border, including the highest technology. I would think that there’s no place like this anywhere. There’s no place that has anything like this or even close to it.

GREG WILPERT: Trump generally portrays the border wall project as if it were something very new. This of course isn’t really the case. If one considers that there are already over 650 miles worth of border walls and barriers along the 2,000 mile US-Mexico border. More than that, a just released report on the history and militarization of the US border shows that the concept of border security is far from new and that there is a massive border-industrial complex actively working constantly on increasing border spending and border security.

The report I’m referring to is titled “More Than a Wall: Corporate Profiteering and the Militarization of US Borders.” It was published by the Transnational Institute in collaboration with the group, No More Deaths, and was written by Todd Miller, who joins us here today. He’s a journalist based in Tucson, Arizona covering border issues, and he’s also the author of the just published book Empire of Borders: The Expansion of the US Border Around the World. Thanks for being here today, Todd.

TODD MILLER: It’s great to be with you. Thank you.

GREG WILPERT: So, let’s start with the history of the border. About 40 years ago in 1980, the budget for controlling the US border was $350 million. Now, your report points out that this has increased 60 fold since then. Give us a brief summary about the turning points in US border policies since then.

TODD MILLER: Yeah, there’s several. There’s a couple of main ones that we point out in the report, and the first one would be in the early 1990s, about 1992-1993. It was during that time when the Clinton Administration started implementing Operation Hold the Line, Operation Gatekeeper, Operation Safeguard. Those are all different border operations— Hold the Line in El Paso, a Gatekeeper in San Diego, Southern California, and Safeguard in Southern Arizona. That was when the US border policy also shifted to what is known as “prevention through deterrence.”

The idea of these operations was that they would begin to concentrate agents, so there’s a hiring surge of agents; border barriers or walls, so they’re building walls— that’s when if you’re going to think about when walls started to be built on the US-Mexico border, out in the US-Mexico border, that would be a good place to start— and technologies. With those three elements, the idea was to blockade on what were traditional crossing places for undocumented people or migrants, and that would be the cities, right? With those operations, we saw increased technologies, more agents, more border walls, that sort of thing, and of course, increasing budgets. If you look through, I believe, at the beginning of the 1990s, the annual budgets were about $1.2 billion. By 2000, it was $4.2 billion, so that’s one part of it.

The second part of it where I would look at how these budgets really historically or massively increased, would be the post-9/11 era. If you, if you look at with the creation of the Department of Homeland security, and when DHS was implemented in 2003, you already had the US border budget going up to close to $6 or $7 billion, but throughout the Bush administration, that would then almost triple. What had happened was that with DHS, everything got changed. Before, the border and immigration enforcement was through the Immigration and Naturalization Service, or INS, and then it changed to DHS. Customs and Border Protection, or CBP, was created. Immigration and Customs Enforcement, or ICE, was created. Then, the priority mission became counterterrorism. So, that wasn’t the case before.

GREG WILPERT: Now, something that is rarely mentioned when considering US border policies, is the fact that since the 1950s, the region 100 miles inland from the US borders has been considered the US border zone. Now, ironically, this includes 200 million people living in that area, which is about two-thirds of the US population, with all of the major cities in that zone. Now, what does this border zone actually mean in practice for controlling that area?

TODD MILLER: It means a lot. It’s what the ACLU, the American Civil Liberties Union, has called a “constitution free zone.” In reality, you can think of the border and often times the border is thought of as a singular line, right? An international boundary line that separates countries, but when you think of the border, you really have to think of what you just described. The international boundary line is one part of it, but where the Trump administration is saying we’re going to build this wall, that’s one part of it. But when you look at Border Patrol strategy, and all their strategy papers going back into the 2000s to 2012, the 2020 CDP vision, all of them stress that part of their strategy is a multilayered enforcement apparatus, so what that means is that the international boundary is only one part of it. It’s maybe the primary part of it, but it’s only one part of it.

So 100 miles inland, when you think about the border apparatus, is how enforcement is laid out, especially on the Southwestern border, and even to a degree on the Northern border with Canada, the 4,000 miles of Northern border of Canada, the 100 mile zone that goes along that border too. And even, we’re hearing more and more operations happening on the coastline because, of course, the coast is considered the border as well. But on the Southwestern border, you can see really clearly what this multilayered apparatus looks like. There’s an international boundary line. The strategies that I was mentioning before, the prevention through deterrence strategy, was purposely designed to then for people not to be able to cross in easier or traditional crossing places, which then funnels people into areas that are more dangerous and desolate, and as has been stated, where people are more easily arrested.

So the actual boundary line is a layer. And then, right now on the US-Mexico border, about 5 to 10 miles inland, you have what they’re calling a virtual wall, which is basically a surveillance system, surveillance towers with cameras. It’s not an actual wall, but there’s towers that work in tandem with each other. And then, they feed their camera feeds and their radar feeds into command and control centers, and that’s a virtual layer. Then, if you go another 10 miles, there’s checkpoints, and the checkpoints literally can extend the 100 miles, but a lot of times they’re concentrated around the 20-25 miles zone, so the checkpoints become another layer.

Then, if you go where I live in Tucson, I can just step out my door and possibly a Border Patrol vehicle will be patrol—There’s Border Patrol that patrol the city. I see them all the time. They’re also working a lot in collaboration with law enforcement, and so there’s that as well. If you’re undocumented in the city and you see a police officer, you might want to avoid them because they have special kind of immigration enforcement powers within the 100 mile zone. Then, in Arizona, of course, according to some of the state laws, they work in collaboration with the Immigration enforcement anyhow.

GREG WILPERT: Okay. Well, we’re going to conclude our first part of our interview with Todd Miller here, the author of the report “More Than a Wall.” Please join us for part two on The Real News Network.

Todd Miller is a journalist based in Tucson, Arizona covering border issues. He is the author of “Empire of Borders: The Expansion of the U.S. Border Around the World”, “Storming the Wall”, and “Border Patrol Nation”.