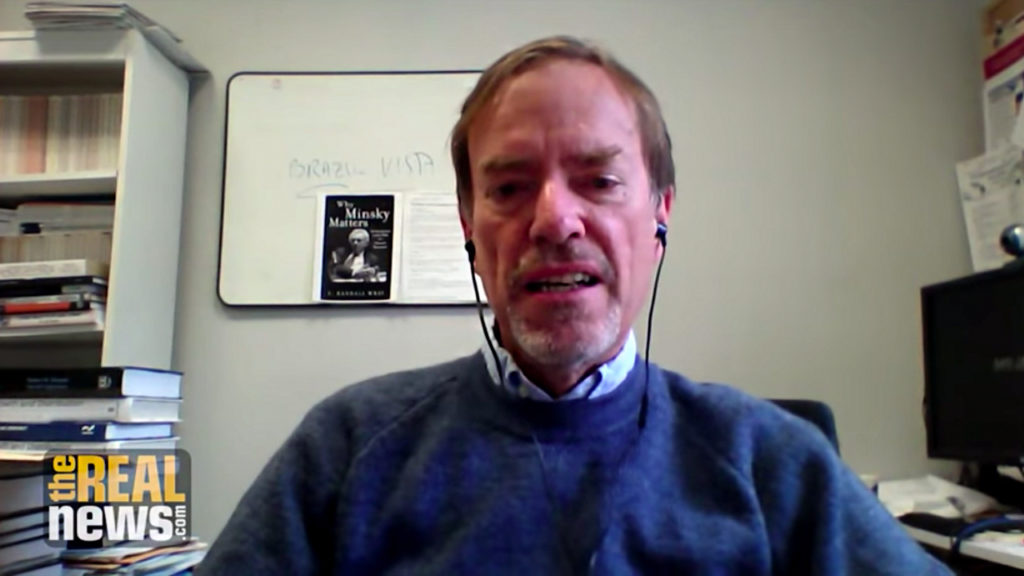 PAUL JAY: We’ve been doing this back and forth on Modern Money Theory or Modern Monetary Theory with Jerry Epstein and Randall Wray. And you’ll see on this page Randall’s interview and then Jerry’s interview, and then Jerry’s response to Randall, and now you’re going to see Randall’s response to Jerry. And without any further ado, we are now joined by Randall Wray. Randall is professor of economics at Bard College and a senior scholar at the Levy Economics Institute of Bard College. And he’s the author of many books, including Modern Money Theory: A Primer on Macroeconomics for Sovereign Monetary Systems. Thanks for joining us again Randall.

RANDALL WRAY: Thank you for giving me this chance.

PAUL JAY: OK. So over to you, you’ve got five-six minutes to respond to what Jerry had said.

RANDALL WRAY: OK. Well first, I think that he’s very selective in his citations of the MMT literature. He claims that MMT has been developed focusing only on the United States and that it’s really only applicable to the country that issues the international reserve currency. And in fact, Bill Mitchell, one of the co-developers of MMT has applied that to small open economies like Australia. My former student, Fadhel Kaboub, for the past 20 years has been applying it to developing countries such as Tunisia, which is his home country. I have applied it, along with Pavlina Tcherneva, to Argentina, and we wrote quite a bit about that. So I think that it’s very selective.

Now, it’s true that developing countries do a face a number of problems that are very difficult to resolve, but we argue that MMT still applies. We show that MMT actually applies to the evolution of money for the past 4000 years at least, from Mesopotamia, through Medieval Europe, to the early American colonies, and finally up the present. So it’s very clear that these are not international reserve currency issuing countries. We argue that it applies to any monetarily sovereign country. Now, what do we mean by that? We mean a country that issues its own currency, that imposes a tax and collects the tax in its own currency, that floats its currency, and the government does not issue debt in any foreign currency.

Now, those first two conditions apply to almost all developing economies. Many of them fail to completely comply with the second two conditions. If they peg to the dollar and if they issue debt in dollars, then they don’t fully meet those conditions, and they’re going to face constraints. They usually will adopt austerity as a means to obtaining U.S. dollars, and that means that they have slow growth, they’ve failed to develop, and they are dependent on the U.S., the IMF, and the World Bank. So we recommend moving off the peg and stop issuing government debt in foreign currencies. Now, we know that’s a difficult condition, and it’s only the first step. They’ve got to move toward food independence and energy independence, because those are usually two of the things that they import. And they’ve got many other problems to deal with, political problems, corruption, and possibly foreign intervention.

So I think MMT falsely gets accused because we don’t offer simplistic solutions to the complex problems of development. All we say is that understanding how a sovereign currency works can help you to understand how your monetary system works better than the neoliberal myths about how money works. Now, Epstein is not a monetary economist, and that’s pretty obvious from the mistakes he makes in his comments on my work. He claims the Fed pumped money into the economy to keep interest rates low and that led to the global financial crisis. Well, two mistakes there. First, the Fed did not pump any money into the economy to lower interest rates, all that has to do is announce a new target rate and the interest rates will move to a new rate.

And second, the Fed actually had been raising rates from about 2004, and it was only after the Fed started raising rates that we got the very worst abuses of the lenders. They were creating dangerous financial products pushed on the homeowners that eventually led up to the global financial crisis three to four years after the Fed had been raising rates. So I think he’s got all of that argument wrong. He also claims that MMT advocates that the Fed print up money to pay for the Green New Deal. He misunderstands how governments spends. MMT does not argue that the Fed should pay for the Green New Deal. The Fed is the Treasury’s bank, and so all Treasury payments and all tax payments go through the Fed. Well, we’re not advocating that we change any of the procedures currently used in order to finance the Green New Deal. We would do it the same way. There is no such thing as the Fed printing up money to pay for the Green New Deal.

Epstein mixes up the role of taxes in reducing aggregate demand and also paying for stuff. We deny that Uncle Sam needs taxes to pay for stuff, but we do agree it could be necessary to raise taxes in order to reduce private spending. That depends on a careful assessment of the resources that will be made available for the Green New Deal projects. We’re doing some preliminary work right now costing that out, and it looks like we probably are not going to need to raise taxes for The Green New Deal. The final point is that Epstein doesn’t understand the international role of the dollar, leading to two mistakes. First, he doesn’t understand the fiscal and monetary policy space that’s available to currency-issuing countries, and he also thinks there is a chance that we’ll run out of dollars and the RMB replacing the dollar as the international reserve currency. I think that both of those things are false.

We are a long way off from the dollar being replaced as the international reserve currency. In addition to a variety of other reasons, the most important factor I think is that we just saw the Fed lend 29 trillion dollars to the global financial system. And before the Bank of China can replace the Fed, markets have to develop a great deal of trust in the international lender of last resort, and right now, that is the Fed.

PAUL JAY: All right. Thanks very much, Randall. So this is just the beginning of a back and forth on MMT, and we’re going to get different voices, and Randall’s going to come back and talk some more about this. If you have some questions, please send them in. We’re going to have more discussions, more debates, and it’s something we’re going to unfold over the next few weeks. So Randall, thanks for joining us.

RANDALL WRAY: Thanks a lot.

L. Randall Wray is a Professor of Economics at the University of Missouri-Kansas City, a Senior Research Associate at the Center for Full Employment and Price Stability, as well as a visiting Senior Scholar at the Jerome Levy Economics Institute of Bard College. He is a past president of the Association for Institutionalist Thought (AFIT)…