Why is China’s Economy Slowing Down? 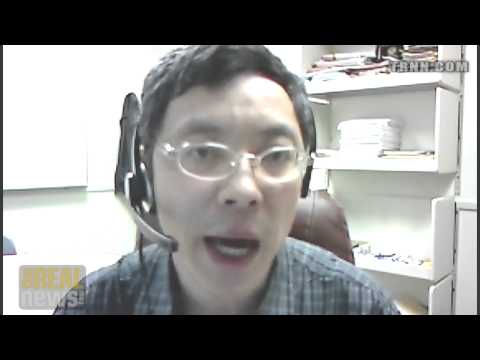 In spite of President Obama’s optimistic outlook for the American and global economy–he calls the union “strong”–if you read the business press, and even some of the more mainstream press, in fact, people are rather concerned about the global economy. There’s talk about the beginnings of are we back into, already, a new global recession.

The Fed on Wednesday announced it was going to continue slowing its purchase of American Treasury bonds, which is going to, in theory, raise American interest rates. It’s already caused a bit of a panic in many markets around the world. Turkey raised its interest rates from 7.75 to 12 percent.

But there was another factor in all of this causing the markets to dump, and that was reports from China that manufacturing is slowing down. And, of course, if there is a slowdown in Chinese growth and demand for raw materials and such, that’s going to be another massive shake to the global economy.

So now joining us to talk about just what seems to be going on with the Chinese economy is, now joining us, Minqi Li. Minqi is an associate professor of economics at the University of Utah. He’s the author of The Rise of China and the Demise of the Capitalist World Economy. And he edits a website, Red China website.

Thanks for joining us, Minqi.

JAY: So one of the factors, as I mentioned, that’s giving people jitters–everybody keeps using that word, jitters, so I guess I’ll use jitters. It’s practically becoming an economic term these days, ’cause they don’t want to–nobody wants to exaggerate things. But at any rate, what exactly seems to be going with this slowdown in China, going on with it? And why is it happening?

JAY: Now, one of the things people talk a lot about is two things: the amount of infrastructure capacity that’s being built in China, a lot of it through a massive amount of credit–bridges and highways and railroads and such; and then there’s a suggestion it’s really over capacity, that they’ve been, you know, kind of artificially making the economy look like it’s growing faster than it really is. I mean, is there truth to that? And is that starting to slow down?

LI: Well, the Chinese economy, of course, has been suffering from this overcapacity problem, and mostly because of the excessive level of investment–about 50 percent of China’s GDP.

But although there has been growing consensus that the Chinese economy is excessively imbalanced and therefore it needs to have a correction in the future, but there is–it still remain debated about how soon that correction is going to take place.

JAY: Now, this announcement by the Fed, which will lead, in theory, to higher American interest rates–I say in theory because a lot of people, you know, are fleeing these emerging markets, buying American dollars, and, you know, it may or may not lead to, you know, at least in the short run, higher interest rates, but I guess that’s a matter of some debate. But it’s certainly messing with the economies from Turkey to Argentina to South Africa. Is it having any effect on China?

LI: Not yet huge impact. What we are talking about is that the U.S. has been undertaking this what they call quantitative easing, so massive printing of dollar in response to the 2008-2009 crisis. And then now, after so many years, the Federal Reserve believe the U.S. economy currently is kind of taking hold, so they start to withdraw from this quantitative easing program.

But the trouble is that during the time of quantitative easing, massive amount of dollar flow throughout the world, and therefore causing bubbles in many emerging economies. And so if the Federal Reserve start to exits from the quantitative easing, it could attract dollars back from the rest of the world. That could leave several emerging economies–and at this point especially Russia, Brazil, and as well South Africa, could be vulnerable, maybe also India.

JAY: And does this in any way benefit China?

LI: I don’t see it benefits China that much. But at this point–and because China still has some capital control–and the Chinese economy is mostly driven right now by only investment. So unless it leads to a massive capital flight from China–and some people do speculate about that, but I personally don’t predict it. So unless it leads to a massive capital flight from China, and then leading to a collapse of the Chinese investment, the impact on the Chinese economy should be limited, at least in the short run. And so about the imbalance of the Chinese economy, about China’s overcapacity and excessive investment, I do think it will have impact in the medium term. But that might not imply a short-term crisis.

LI: To that, I don’t have–actually, I don’t have knowledge. And at least I don’t think there’s a–the official movement by, say, the Chinese central bank in terms of this carry trade, although during the time of quantitative easing–and there’s U.S. dollar flow from the U.S. towards China–that might have played a role in China’s real estate bubble.

JAY: And why do you think the Fed did slow down these purchases? I mean, one of the arguments you hear from certain more conservative forces on the Fed and about the economy–that you can’t just keep doing this or people will lose confidence in the dollar is sort of a psychological argument. There’s also the, you know, talk that, you know, in the longer term they’re worried about inflationary forces. Well, that’s kind of hard to see right now. But if anyone has an interest in keeping the American dollar, you know, high, you would think it’d be China, given how many billions, trillions of American dollars they own. Is China concerned about this quantitative easing? And do they want to see less of it?

LI: Well, on the Chinese part, they are in a contradictory position. On the one hand, on paper, of course, if there is dollar depreciation–and that would lead to capital loss on China’s foreign exchange reserves. But then dollar depreciation, you know, that would also have–I should say that, you know, that would also have impact on the Chinese exports. And so China needs to balance in between these two concerns. One is the value of China’s foreign exchange reserves; the other is the impact on the competitiveness of the Chinese exports.

And then on the U.S. part, on the U.S. part, you know, of course, the unemployment rate is still very high. And then the workers’ wages basically have not grown and may have declined, at least if we compare it to the pre-recession years. But on the other hand, the American capitalists are doing very well. The U.S. corporate profit rate has more than recovered compared to the pre-recession years.

So in this case, I guess the Fed feels that they are now confident enough they could start doing this exit from the quantitative easing. And so the argument is that if they don’t do it now, if in the future the U.S. economy gets overheated–and then the Fed would have less room to manipulate.

LI: Well, based on the official data that the U.S. economy, of course, is not doing great. But on the other hand, there’s not even a danger of another recession. And then, as I said earlier, the corporate capitalists are doing well. And so in this case, and the Fed feel that this might be the moment they want to start doing this exit from quantitative easing.

JAY: So there’s–as I said, in the business press, and otherwise, there’s lots of sort of speculation: is this the beginning of another global recession? I mean, how fragile is this moment? How dangerous is this moment?

LI: Personally, I would say this is probably premature to call another great global recession.

What I will watch, on the one hand, is how the Chinese economy is doing. And I would give it a few more years before a serious crisis tendency emerge in China.

And another thing I would like to watch is what will happen to the U.S. shale oil boom. So the U.S. oil production increased from about 5 million barrel per day back to 2008 towards–now it’s basically, like, 8 million barrel per day. So that’s a huge increase of oil production. And that also contributed to the stabilization of oil price. But there has been some analysis suggesting that this oil boom could come to end in two or three years. And so, if that happens, that may be a turning point for the global economy.

JAY: Okay. Thanks very much, Minqi.

LI: Thank you very much.