Why Are Stock Markets So Volatile?

A serious depression is pending as a result of austerity, says Professor Michael Hudson, author of The Bubble and Beyond, and Finance Capitalism and Its Discontents

A serious depression is pending as a result of austerity, says Professor Michael Hudson, author of The Bubble and Beyond, and Finance Capitalism and Its Discontents 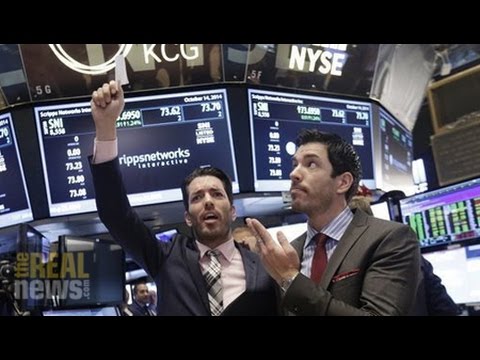 On Wednesday this week, the S&P 500 took a dive and then partially recovered itself in what stock market watchers call a selloff scare.

To talk about what is behind the volatility is our regular guest, Michael Hudson. Michael Hudson is distinguished research professor of economics at the University of Missouri-Kansas City. His latest books are The Bubble and Beyond and Finance Capitalism and Its Discontents.

MICHAEL HUDSON, PROF. ECONOMICS, UMKC: It’s good to be back.

PERIES: Michael, if you heard stock market reporting yesterday or saw The New York Times‘ business section today, you would have thought we were in another stock market plunge. What’s behind this fluctuation?

HUDSON: Well, the markets are obviously confused, because there are two sets of forces on the market, one positive and one negative. The positive thing is that we’re going into a real serious depression [incompr.] austerity in the United States, austerity in Europe. And for the last six years, since 2008, almost all of the gains have been going only to the 1 percent. This has caused–they’ve kept the debts on the book. It’s creating large unemployment.

And so Europe and America are saying, this the best opportunity we’ve had in a century. Here is a chance to do what we call reform. A century ago, reform meant increasing wage levels and increasing living standards and taxing the rentiers, but right now reform means, in Europe, breaking the labor unions, lowering wages, and putting the squeeze on labor. So all of that is supposed to be good for profits.

PERIES: But, Michael, just last week the Bureau of Labor Statistics in the U. S. announced that unemployment is the lowest it has been in a very long time. Why? This is contrary to what you’re saying.

HUDSON: Well, it’s true that the unemployment rate among people searching for jobs is low, but there’s been a large movement out of the market for a number of things. Number one, fewer people are even looking for work. They’ve given up. Number two, many of the jobs that are being created are very low wage jobs at the low end of the spectrum or they’re part-time jobs. And if you work for part time at all, you’re not considered unemployed. If you’ve given up looking for work, you’re not considered to be unemployed.

So even though some of the wage levels, the minimum wage has been raised in Massachusetts and out West, when the minimum wage level is raised, that means the families that have been living on food stamps while they’ve been working at McDonald’s or at other low-wage companies, they don’t qualify anymore. So there’s been very little change in the actual family budgets.

The markets were expected to sort of somehow take off with higher profit if there was a business cycle recovery. But it’s become apparent that we’re really not in a business cycle anymore. We’re at the end of a long 50-year cycle since World War II, where the debts have been rising so much that all of a sudden the economy can’t be financed by debt anymore. And if the economy isn’t financed by debt, that means that markets can’t grow, that all of a sudden what was fueling the growth and consumer demand that’s been increasing profits has come to an end. This is especially apparent in Europe. So, basically, what people thought was supposed to be good news turns out to be quite bad news.

PERIES: Michael, when the World Bank and, actually, the IMF adjusted the global growth rates last week, which has been a trend–you know, they’ve done it consecutively for a number of years now where their long-term projections aren’t just turning out the way they had planned and projected. Why is that happening?

HUDSON: Well, they had thought when the World Bank and other people had forecast a trend, they’d take past growth rates as they were up to 2008 and just said, what if they just continue as if growth occurs automatically? But what was fueling all of this growth was just a creation of debt, largely by inflating real estate prices, and bank credit creation, and government spending that has run a deficit.

Now, economies, in order to grow at this rate, they need credit and they need income. Now, the credit either can come from governments running a budget deficit and pumping money into the economy, or it can come from bank lending. But at the IMF meetings last week, it was clear that as far as Europe’s concerned, the banks have not recovered yet. The banks are not lending. And American banks are not lending. There has not been any lending in Europe or in the United States for new capital investment. And it’s capital investment to build factories, to make new means of production that employs labor.

So you have this whole source of employment that was fueling the global economy since World War II is coming to an end, capital investment to increase. The only capital investment that’s occurring really is in the BRICS countries, not in America and not in Europe. So the kind of employment that occurred in the past has not been occurring since 2008. What we have is sort of living on the corpse of the economy that was left in 2008 and it’s basically an economic shrinkage process we are in. There’s no infrastructure spending. The infrastructure’s aging. There’s no corporate industrial investment. That stopped. There’s simply services trade in the military.

PERIES: Michael, only thing that held up yesterday were some of the transportation stocks. Why is that? And also explained to me–you wrote to me saying 91 percent of the S&P 500 earnings are spent on stock buybacks and dividends. What does that mean?

HUDSON: Well, in 2008 the Federal Reserve here and the central bank in Europe lowered interest rates way down to almost nothing. It’s one-tenth of a percent in the United States. That means that banks can borrow from the Fed to make loans. And what they’ve been lending for are for corporate takeovers and for stock buybacks. In the stock market in the last year, one-third of all of the stock transactions in the United States are stock buybacks. That means corporations are using–the S&P 500 have used, I think, 54 percent of their earnings to buy back their own stock, and they’ve been using another 40 percent or so to pay dividends. Now, that has left only 9 percent of earnings of the S&P 500 available for new investment. Never before has this ratio been so low.

Most companies use their earnings to reinvest. They expand. They try to earn more by investing more to produce more to make more profits to keep on growing. But that hasn’t been occurring at all. They’ve been using their earnings basically to give stock options to the managers. The manager say, okay, I’m paid according to how much I can increase the price of the stock. I’m not going to use my corporate earnings of IBM or General Motors or whatever, I’m not going to use these to build more plant, ’cause then I’m going to use it to push up the stock so I’m going to get more in my stock option. And you have activist stockholders such as have been raiding Apple and other companies, like Carl Icahn, that have been pressing Apple and others to actually borrow not to invest as the textbooks say, but to buy back their own stocks. So you have companies that are actually going into debt to buy their own stock.

Now, the low interest rates that in economic theory are supposed to make it more profitable for companies to invest and employ more labor and grow are having just the opposite effect. The low interest rates are creating a new stock market bubble, which is why the stock market has gone up so much since 2008. But this rising stock market bubble has only been in the price of the stock. It’s stocks going up without any new capital investment, without any new hiring, and, in fact, with downsizing and outsourcing. So they’ve turned the traditional textbook model of economic recovery inside out.

And gradually the investors and the hedge funds are realizing, wait a minute, this isn’t your textbook kind of recovery; this is a kind of recovery that’s only occurring in the financial sector and real estate and insurance, the FIRE sector, finance, insurance, and real estate. It’s not occurring in the economy at large. And if all of these earnings on Wall Street are not recycled in the economy at large, then markets are going to shrink, there’s not going to be much of a rental income for commercial space, and with shrinking markets you’re not going to have companies earning more profit on investment, even if they’re holding down wages.

PERIES: Michael, does this have anything to do with the murmurs out there that the interest rates might actually increase?

And all of this was exacerbated by the U. S., the new Cold War against Russia, because essentially the United States went to Europe and said, let’s you and Russia fight. So Europe imposed sanctions, and Russia imposed harder sanctions. So the European economy is shrinking. And so, because the European economy’s shrinking, the euros going down. The Eurozone is turning into a dead zone, and the Europeans are moving their money into the United States. That’s pushing up the dollar.

Now, if the Federal Reserve were to raise interest rates at this point, this would not only slow, bring down the stock market and bring down the bond market, but it would also bring so much money into the dollar, because Europe cannot raise its interest rates, that this would price American goods out of world markets. And that would shrink the market for American industrial exports all the more. So the United States has painted itself into a corner where it really can’t increase interest rates. Even though investors worry that the Fed is going to raise it, the Fed knows that it can’t raise interest rates without crashing the market down.

PERIES: Michael, thank you so much for joining us.

December 4, 2018
Sign Up for Our Newsletter
Help Us Make Real News!