Trump is Turning Against the White Working Class that Elected Him

Rising stock prices is not an indicator of financial health like Trump would have you believe, specially when you examine who is buying that stock, says economist Michael Hudson, the author of Killing the Host: How Financial Parasites and Debt Destroy the Global Economy

Rising stock prices is not an indicator of financial health like Trump would have you believe, specially when you examine who is buying that stock, says economist Michael Hudson, the author of Killing the Host: How Financial Parasites and Debt Destroy the Global Economy 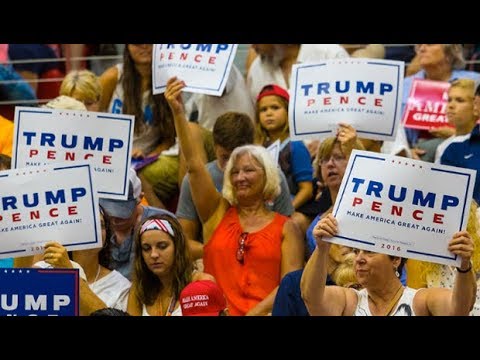 SHARMINI PERIES: It’s the Real News Network. I’m Sharmini Peries coming to you from Baltimore. The rise of stock prices in the US stock market could be an indication of economic growth and prosperity, but it could also be an indication of the concentration of wealth of the rich and powerful. Which is it? To answer that question, we need to look at other economic indicators. In the press conference that President Trump had just a few days ago announcing his new chief of staff, General John Kelly, Trump took the opportunity to give himself credit for the rising stock prices. Let’s listen.

SHARMINI PERIES: Well, on to talk about this with me today is Michael Hudson. Michael is a distinguished research professor of economics at the University of Missouri, Kansas City. He is the author of The Bubble and Beyond and The Finance Capitalism and Its Discontents. His most recent books are J is for Junk Economics and Killing the Host: How Financial Parasites and Debt Bondage Destroyed the Global Economy. Good to have you back, Michael.

MICHAEL HUDSON: Good to be back, Sharmini.

MICHAEL HUDSON: Well, the answer’s quite simple. The question is, who is buying these stocks? It’s not individuals. It’s not even pension funds. It’s not the private sector. Almost all the stock purchases are bought back by corporations in share buybacks. In other words, companies are buying back their own stocks in order to push up the price because that’s how executives are paid. They’re not paid by increasing output or even increasing profits. They’re paid by how much they can push up the stock price, and there are two ways of doing this easily. One is to use earnings simply for share buybacks, buy your own stock and push it up, or you simply pay out the earnings in dividends.

What you don’t do if you want to increase the stock price is you don’t invest more in research, you don’t invest more in capital, you don’t hire more labor, and you don’t expand the markets. In other words, you give up. You say, ‘The economy’s reached an end. It’s not going to grow from here. We’re taking the money and running. We’re just going to use the earnings that we have to help the stockholders,’ so the stock market is actually the reverse of how the economy is doing.

SHARMINI PERIES: All right, Michael. This might be a little elementary for the big-time economist, but explain how the buying back of stock increases the money that they make.

MICHAEL HUDSON: The price of almost anything is a result of how many people are buying and how many people are selling. What’s happened is basically the individuals and the private sector is selling the stocks. Normally this would push down stocks, and the reason it’s selling is most investors think, ‘Wait a minute. The reason stock prices have gone up is because the Federal Reserve has flooded the economy with low-interest money and people are borrowing at 1% in order to buy stocks that are yielding 5 or 6% and they’re pocketing the difference.’

But now, everybody thinks, ‘Wait a minute. This is going to come to an end. The Federal Reserve says it’s going to raise interest rates. Same thing in the European Central Bank and the Bank of England.’ They expect higher interest rates are going to push down stock prices because it’s not going to pay people to borrow to buy stocks anymore. Most investors today are looking for the stock markets to make a big decline. They don’t want to hold them.

Who is going to want to buy stocks that are going to go down in price? The answer is the corporations are going to buy it because the stock managers aren’t penalized if they make a bad investment. If the stock price goes way down, the company loses because they had a huge loss on its shares that it bought back, but the managers of the company clean up. They’re paid the bonus because they’re paid according to how much money they can push in to buying up their own stock to support the price. If you say you’re going to pay a high price for anything, that’s going to raise the price and they’re pouring the corporate earnings into their own stocks, not into investment.

SHARMINI PERIES: Why are companies paying out high dividends rather than reinvesting their profits in order to generate, say, long-term income?

These companies have been turned into financial entities. You should no longer think of them really as industrial entities. Corporations make money financially, not by producing goods and services.

SHARMINI PERIES: Right, and Michael, could you explain why suddenly we see big mergers going on? For a while there there seemed to be a hiatus in terms of these kinds of big mergers, but recently we’ve seen Amazon merging with Whole Foods, some of the major media companies, if not already, are considering mergers. Why is this going on right now?

MICHAEL HUDSON: Two reasons: One is there is still a lot of low-interest credit available for them. Companies can simply borrow from banks that borrow from bondholders at low-interest rates and buy another company and create a monopoly. In the past they couldn’t do this because they were afraid of anti-monopoly legislation. Today, you have four or five companies controlling almost every major industry. Think of the airlines, think of cable TV, think of the phone companies, think of information technology. They’re all being monopolized and there are no more anti-monopoly rules, and so what they’re trying to get isn’t really profits.

SHARMINI PERIES: Finally, in terms of Trump’s economic plans, how do these trends, these mergers and stock prices going up, affect the very people that voted for Trump, the white working class in particular?

MICHAEL HUDSON: Obviously it’s not helping them at all. They listened to what Trump said, not realizing that when you’re voting for a presidential candidate, you want to look at who his financial backers are. Who are the donors? Trump’s donors were basically the monopolists: the Koch brothers, and the oil and gas industry, and other far-right-wing corporate organizations that are all in favor of monopoly. The last thing they want to do is help the working class. Trump’s genius was in convincing the white working class that he was for them when actually his policies are against them.

Just like the Democratic candidate Hillary was able to convince her constituency, the blacks, the racial minorities, that she was for them instead of coming down hard against them as the Clintons’ have done ever since the 1990s with their tax on welfare, their support of Wall Street, and their support of big capital. Both parties have the same donor class and they’re trying to get elected by groups in America that they have no intention at all of carrying forth their promises to help their interests.

SHARMINI PERIES: Further, one must notice that when Trump and Pence were running for office, back in September 2016 they launched their big economic plan which was going to create 12 million new jobs. If you click on that plan now, it goes to an error message and an empty page.

MICHAEL HUDSON: The problem is that any economic plan has to be more than two days long. That’s Trump’s attention span. He is not a long-term planner. He’s just going to opportunistically ride whatever wave there is at a given moment, and nobody I know, whether my old Republican friends or other analysts, has a clue about what he’s going to do next because I don’t think he has a clue what he’s going to do next. He’s just going to say, “What’s in it for me?” Whoever gives him the most, that’s going to be. You can look at his Russia policy, has turned into anti-Russia. You could look at his policy saying NATO’s obsolete that’s now pro-NATO. His policy in the near-East … he’s gone against everything that he’s said. That’s what a smart demagogue does.

SHARMINI PERIES: All right, Michael. I thank you so much for joining us today and look forward to your report soon.