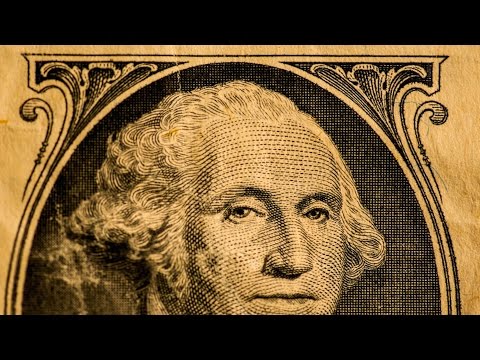 I am speaking with Michael Hudson in our studio in Baltimore about his new book, “J Is For Junk Economics: A Guide to Reality in the Age of Deception”.

Thank you again for joining me.

SHARMINI PERIES: So, Michael, one of the concepts that you deal with is really about balancing the budget, the whole mythology surrounding that. Which is your myth number 17 where you say, “Government budget deficits are bad. Balanced budgets are good. And budget surpluses are even better.” What’s wrong with this?

MICHAEL HUDSON: The popular press acts as if somehow the government balance sheet, the governments act like a family. And just as families have to balance the budgets, governments have to. But this is a false analogy because if you spend more than you earn, you can’t write an I.O.U. and then this I.O.U. everybody else can spend as if there’s money. You have to, at some point, pay the I.O.U., usually with interest, to the bank. But that’s not the case with the government. When a government runs a budget deficit it can do so in the way that Abraham Lincoln funded the Civil War, you print the money. And you print the money to pump money into the economy, if you spend it into the economy.

Almost every year until the 1990s, the United States, like every other country in the world, increases the foreign debt by running a budget deficit, by spending money into the economy for infrastructure, for schooling, for roads and this is what enables the economy to grow. This stopped under the Clinton administration in the 1990s. At the end of the administration he fell for this neo-liberal theory that you should balance the budget and he actually ran a budget surplus. So the government stopped spending money into the economy.

The result was the economy had to depend on somebody creating the money. If the government doesn’t who creates the spending power? Well, the answer was the banks. That Clinton did exactly what he was told to do by the Secretary of the Treasury, Robert Rubin, and said, “Let the banks create all the money and charge interest instead of the government creating money just by spending it like the greenbacks were spent.” The advantage of the government creating money is you don’t have to pay interest and it’s self-financing. The people talked about, look at how large the government debt is and yet this is debt that never has to be repaid. Adam Smith wrote that no government has ever paid its debt.

Now, I think it’s easier for most Americans to understand this by looking at Europe instead of the United States. Europe, under the Eurozone, central banks are not allowed to create money. And as a result the economies of Europe are all shrinking into austerity. Greece is the most notorious example. Here you have unemployment among youth up to 50%. You have the economy suffering in the last five years for the worst depression since the 1930s. And yet the government is not able to spend the money to create public rebuilding of the economy and the banks won’t let them do it because they’re trying, basically the idea of the neo-liberals who are trying to prevent the government from spending money is to say, “Well, if the government can’t run a deficit then it can’t spend money on roads and infrastructure and schools, they’ll have to privatize it.”

And if we can privatize the economy then we can turn the whole public sector into a monopoly. We can treat what used to be the government sector as a new financial monopoly. And instead of giving free schooling we can make people pay $50,000 to get a college education or $50,000 to get a grade school education, as you have to if you go to New York private schools. We can turn the roads into toll roads. We can charge people for water and we can charge for what used to be given for free under the old style of Roosevelt capitalism and social democracy.

And if you don’t have a government who is going to govern? Obviously the people with the money. It will be Wall Street, it will be the corporate sector and this claim for a balanced budget is saying, “We don’t want the government to fund public infrastructure we want it to be privatized in a way that will generate profits for the owners, interest rates for the bond holders and the banks that fund it, management fees and most of all capital gains for the stockholders and we will jack up the prices for public services.” The reason why all of the European countries, all of the United States and North American countries ran budget deficits for so many years is because they want to keep this infrastructure in the public domain, they don’t want it to be privatized. Because the kind of things that government spends money on, roads, railroads, schools, water are exactly the kind of things that people absolutely need and they’re the last things that you want to be privatized. Because if they’re privatized instead of the government spending on it, then they can be monopolized. And all of these public spending programs are really for natural monopolies.

And the whole idea of a well-run economy is to prevent a natural monopoly. Well, this was not done in Russia and you just have to look at the disaster of Russia under the neo-liberals, since 1991, the huge immigration rates, the shortening life spans, the rise in disease rates, rise in drug use, you can see how demoralizing a country is if you can just stop the government from spending money into the economy, causing austerity, lowering living standards and really putting the class war into business. So what Trump is suggesting is putting the class war into business, financially, with an exclamation point.

SHARMINI PERIES: You talked about the implications of cutting government spending and, in fact, your myth number 18 deals with this. You say that cutbacks in public spending will bring the government budget into balance, restoring stability. And you just demonstrated through the Russian example that this is quite misleading and, in fact, it has the opposite effect and destabilizes the population. So this policy Trump seems to endorse the cutback in public spending — give us some examples of how this could affect society, specifically.

MICHAEL HUDSON: Well, you used the word “stability” and this is a kind of slogan to prevent thought. And that’s what George Orwell said, he didn’t use the word “junk economics” but he said that’s what a double-think is. The function is to prevent thought. Stability is very much akin to the great moderation. Remember how economists running up to the 2008 crisis said, “This is a great moderation.” And what made it moderate?

Well, Alan Greenspan went before the Senate Committee and gave a long talk on what is it that’s made America so stable? Well, we now know it was the most unstable decade in a century. It was a decade of financial fraud, it was a decade where economic inequality between wealth and the rest of the economy widened. And Greenspan said, “What’s stable is the workers haven’t gone on strike. The workers are so deeply in debt they owe so much money that they’re one paycheck away from missing an electric utility payment and they’re afraid to strike. They’re afraid even to protest against living conditions. They’re afraid to ask that their wages be increased to reflect the productivity. What’s stable is we, the rich people, my constituency, the five percent or the one percent get all of the income and the people get nothing.” That is stability according to Alan Greenspan.

So when you use words like stability or all of these euphemisms that are used are there to make people think that somehow it’s stable is the economy is slowly and slowly squeezed and that’s basically what happened in the great moderation. It was the great squeeze of everything and it was squeezed, again, because the government was cutting back spending on social programs at this time. It was dismantling the whole new deal array of consumer protection agencies, which also Trump wants to get rid of. The first thing he wanted to get rid of, for example, he said, is Elizabeth Warren’s Consumer Financial Protection Agency. And he said, “The problem is this, it’s trying to prevent fraud and that’s limiting choice. Just like we let people go to McDonald’s and buy junk food and buy junk sodas and get obese, we have to let them have the free choice to put their pension funds in Wall Street companies that are going to cheat them.”

Now, these companies have had to pay tens of billions of dollars for financial fraud and that’s bad because they’ve had to pay it. And we want to dismantle all of the penalties against financial fraud, against cheating consumers. Because that’s reducing the amount of money that rich people can get and rich people are what’s driving the economy. Well, they’re driving the economy by fraud. I mean, that’s the kicker in all of this.

So in dismantling the government spending on The Consumer Financial Protection Agency, The Public News Agencies, The Endowment for the Art, you’re stripping the economy away and making the American economy just like what Margaret Thatcher did in England, you strip it away and make it a much less dynamic, much less lively place and, above all, a much poorer economy. And that is the aim of all of these reforms which mean undoing all what reforms used to mean for the last century. So all of these words and the vocabulary that are used in the press all dovetail into each other into a fictitious economy so that people think they’re living in a parallel universe and are unable to use the vocabulary and the economic concepts to explain just why the economy is so unfair and why they’re getting squeezed so badly and how it doesn’t have to be this way. They don’t have to be squeezed. But that requires an alternative program and an alternative program means recapturing the language to explain what it is you’re trying to do.

SHARMINI PERIES: Perfect. This is a good place to stop and continue into our segment five with Michael Hudson. We’re talking about “J Is For Junk Economics: A Guide to Reality in the Age of Deception”. Thanks for joining us.