A new study says that Greenland is melting at a pace far faster than previously estimated and could displace 400 million people due to global sea-level rise.

A new study says that Greenland is melting at a pace far faster than previously estimated and could displace 400 million people due to global sea-level rise. 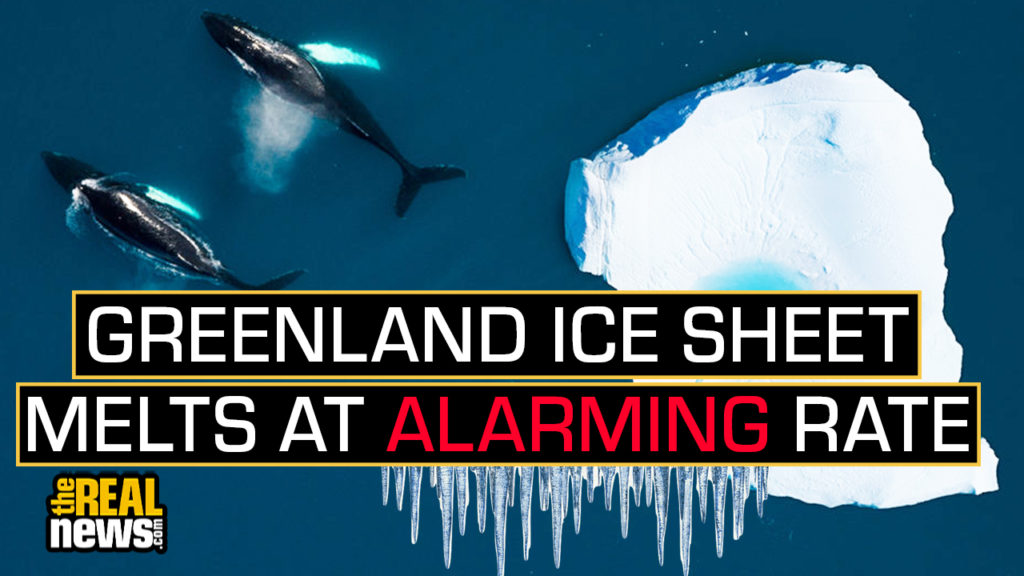 A new study released during the just concluded comp 25 in Madrid reveals that Greenland’s massive ice sheet is melting much faster than previously thought. According to that study, Greenland is losing ice seven times faster than it was in the 1990s and the scale and speed of ice loss is much higher than was predicted or the intergovernmental panel on climate change.

Published in the Journal of Nature, the study examined 26 different satellite depictions which showed changes in the ice sheets volume flow and gravitational potential. The study concluded that in the past 30 years, Greenland has lost 3.8 trillion tons of ice. That’s trillion with a T. This amounts to 33 billion tons of ice per year in the 1990s rising to 254 billion tons per year in the last decade according to the study. One of the scientists who authored this study is here to talk to us today.

Andrew Shepherd is a professor of earth observation at the University of Leeds in the United Kingdom as well as director of the Center for Polar Observation and Modeling. He’s also the co-leader of the Ice Sheet Mass Balance Inter-comparison Exercise. Thank you for joining us today. Dr. Shepherd.

DIMITRI LASCARIS: So I’d like to begin with the human impacts of this study. In light of these findings, what kind of sea level rise are we now expecting to see by 2100 and how many people will be at risk of displacement as a result of that sea level rise?

ANDREW SHEPHERD: So the best we can do is to assess the past predictions of the IPCC’s experiments. We can do that now because we’ve got two or three decades worth of measurements and that allows us to iron out the weather patterns and weather does affect Greenland much more so than Antarctica. When we do that, when we compare to the predictions, we see that the ice sheet has been tracking the upper range, not the mid-range. That does mean if things continue as they are, that sea level rise will be higher than people are expecting.

DIMITRI LASCARIS: That level of sea level rise in your estimation would impact how many people around the world?

ANDREW SHEPHERD: So there are different ways of assessing the impact of sea level rise on people around the world. In the past there been a tendency to focus on very low lying islands in the middle of the ocean and when they would become eventually inundated and submerged and it would usually take two to three to four meters of sea level rise to do that. So that’s been at the back of people’s minds when they’re considering the impacts of climate change for a long time now.

Actually we’ve seen recently more recently an emphasis on coastal flooding instead, which happens episodically. It happens in autumn time when the storms come in and when we get storm swell surges and that happens in places from time to time and that causes actually much more devastation than inundation of low lying islands to large numbers of people. The estimate is today around 250 million people on the planet are exposed to some flooding once or more per year and that over the next century that will go up to something like 350 million because of sea level rise and the impact that sea level rise has are on main sea stands and the frequency of storms floods.

DIMITRI LASCARIS: A recent report to Dr. Shepherd commissioned by the Pentagon predicted that sea level rise would “displace tens if not hundreds of millions of people creating massive enduring instability.” In fact, so many governments in the world today seem preoccupied by flows of migrants and refugees. In Europe, a refugee crisis in the Mediterranean involving several hundred thousand desperate migrants and refugees created a considerable degree of political instability. The flows of migrants and refugees that you’re talking about would vastly dwarf what we’ve seen in the last 10 or 15 years.

Is it your sense that governments in the world today are preparing to deal with these potentially massive human displacements that await us on our current trajectory?

ANDREW SHEPHERD: So I think that again, it’s convenient to think that these sea level rises are going to affect people who might want to migrate. That’s not true. Of the sea level rise that we expect over the next century, 1 million of the people that will be affected will be in the mainland United States and 1 billion people who will be affected will be in the UK. We all have coastlines and low line areas.

These are not necessarily economic migrants. These are people whose day to day lifestyles will be interrupted because of flooding. This might not mean that they have to leave their homes, but it will mean that their homes will be at current risk of flooding. So some sort of protection will need to be built to protect people’s homes. That in the end it comes down to money. This is a useful thing to warn people of because the costs doing nothing are likely to be much more than the costs of trying to reduce sea level rise in the future.

DIMITRI LASCARIS: In your view, what kind of mitigation efforts are needed to minimize those costs?

Again, these are costs to protect economic interests, not people’s homes. They don’t cost nothing. They cost some things. So there are already good ideas of how much it will cost just to protect the most valuable assets, not protect people’s homes. It’s not as simple as building seawalls. You can’t just build a sea wall around an area like Manhattan. The solution there is to reclaim land and you can’t do that everywhere. So around the Embarcadero in San Francisco for instance, that’s already reclaimed land. So you can’t reclaim any more land. There a sea wall will have to be built and that will have economic impacts on regional tourism, for instance.

DIMITRI LASCARIS: Well we’ve been speaking to Dr. Andrew Shepherd about a new study showing a more rapid melt in the massive Greenland Ice Sheet. Thank you very much for speaking to us today, Dr. Shepherd.

Andrew Shepherd is Professor of Earth Observation at the University of Leeds, Director of the NERC Centre for Polar Observation and Modelling, Principal Scientific Advisor to the European Space Agency CryoSat satellite mission, and co-leader of the Ice Sheet Mass Balance Inter-comparison Exercise for ESA and NASA. He uses satellites to study changes in Earth’s…