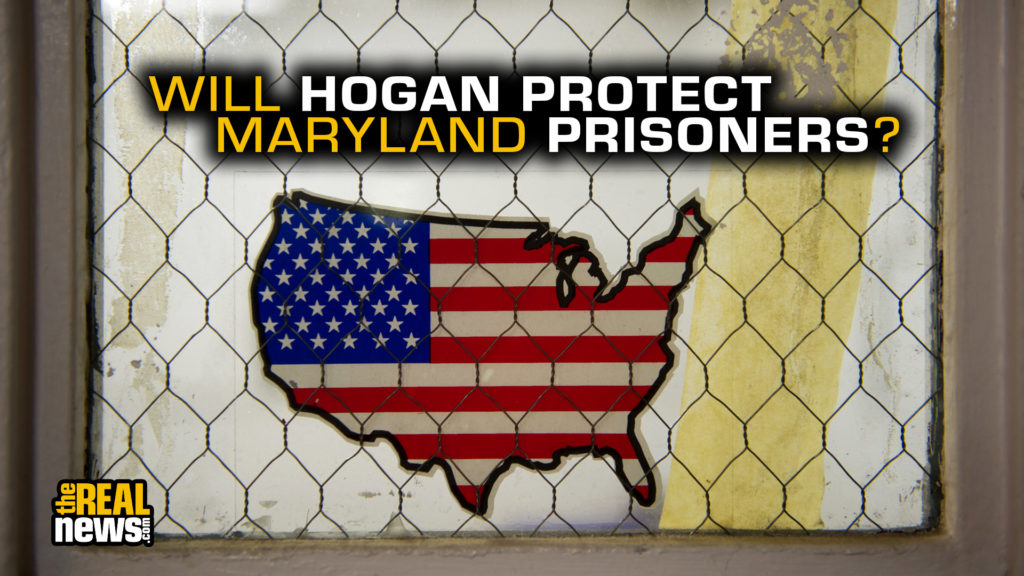 Update: After publication, TRNN received the following statement from the Department of Public Safety and Correctional Services:

The Department has been continuously collaborating around the clock with multiple agencies, including the Maryland Department of Health (MDH) and the Maryland Emergency Management Agency (MEMA).
The Department is committed to providing all facility correctional populations with updated information regarding precautions, prevention, and supportive therapy for the COVID-19 virus. This includes all of the prevention actions advised by the Centers for Disease Control (CDC) and the Maryland Department of Health (MDH) regarding COVID-19.
Statewide, the Department utilizes privatized medical doctors and nurses who provide on-site care for the incarcerated population at infirmaries in each region.
The Department has robust emergency plans in place that include modified housing options in the event of an outbreak, all designed to protect the incarcerated population, staff and their families.
Total social distancing is impossible in a prison setting. However, by canceling visits, eliminating group programming and contact activities, and modifying movement the Department is working to keep infection from entering its facilities.
The Department remains vigilant, as conditions change the Department continues to work to ensure the safety of its facilities.
The Department has instituted enhanced hygiene and sanitation practices consistent with the recommendations of MDH and CDC.
The Department has been utilizing a front entrance protocol.
The Department is implementing temperature checks at the point of entry and questionnaires during shift change. These are handled by medical and trained personnel.
The Department is monitoring supplies daily, and has provided additional soap to inmates at no cost. Education about personal hygiene and enhanced cleaning efforts are being undertaken throughout the system.
To date, the Department has had no confirmed cases of COVID-19 among its inmate population.
The Department is in the process of establishing—-likely by the end of the week— a 24-hour hotline which loved ones of inmates and detainees can call to have their questions answered.  Details of the hotline—-and the number itself— are not finalized at this time. Once operational, the hotline will be listed on the Department’s public website.

Jaisal Noor: Welcome to The Real News, I’m Jaisal Noor. It’s been called a powder keg. COVID-19 has highlighted the dangerous conditions faced by the over 2 million people behind bars in the United States that puts them at risk for infection. Inmates and correctional officers across the country have already tested positive for the novel Coronavirus. Advocates have demanded the release of prisoners for their own safety and several states and localities have already taken action. On Friday, rep Ayanna Pressley of Massachusetts and Senator Elizabeth Warren of Massachusetts sent a letter to president Trump calling on him to reduce the federal prison population in order to combat the pandemic. In Maryland thus far, governor Larry Hogan, who has earned wide praise for his response to COVID-19 has resisted calls from a growing number of advocates to expedite parole hearings, release elderly patients, and those at risk among a host of other demands. Well, now joining us to discuss this is one of those signatories to the letter to governor Hogan. Alexander Girgis is a current MD-PhD trainee at Johns Hopkins University and part of the Hopkins Incarceration Health Justice Collectives. Thank you so much for joining us.

Alexander Girgi…: Thank you. Good to be here.

Jaisal Noor: So right off the bat, I think it’s important to note, I’m just reading a headline here, Maryland leads the nation in incarcerating young Black men. Talk about your demands to governor Larry Hogan.

Alexander Girgi…: So we’re making a number of demands, but the common theme among all of them is that we’re asking that the governor’s office place a priority on existing parole and probation procedures for the subpopulation of incarcerated individuals who have been determined by existing guidelines to be most at risk from morbidity and mortality due to COVID-19. So that would be people who are over 60, people with chronic health conditions like heart and lung disease, or diabetes, or immunocompromised. We’re asking several demands that are ultimately aimed at moving at least a subset of those individuals out of the prison system to reduce their exposure. So that would be things like expediting parole procedures for those populations, declaring parole and commutation or release proceedings as emergency procedures. So those can be kind of triaged or expedited in the system. And we want the governor’s office to expedite geriatric and medical parole hearings.

And the ultimate goal of all these things, I think we have to understand, as you mentioned, the prison system is a potential powder keg for problems related to COVID-19. Whenever you have a gathering of people in a closed space with shared resources, there’s always a potential for transmission of disease. It doesn’t matter who you are, whether you’re incarcerated or not. But the differences is of course incarcerated populations have less of a voice when it comes to advocating for their own rights in that respect. And so they have been, I think, sadly overlooked when it comes to responding to this epidemic so far. And we need to act quickly to avoid a really rapid spread of the outbreak in these populations.

Jaisal Noor: So we understand that these populations are already subjected to disease and outbreaks already. Before the Coronavirus pandemic hit, we already know these populations are at risk. Talk more about why it’s important that action be taken. And it’s important to note that states across the country and cities have taken action and in many cases, it’s been too late to avoid outbreaks, but they’re beginning to take action. So far, governor Larry Hogan has not taken action.

Alexander Girgi…: Yeah. That’s a great point. I mean, unfortunately, due to systemic inequities and access to care and other factors, the incarcerated population does tend to be less healthy than the non-incarcerated population. And there are larger incidences of communicable illness including hepatitis and HIV and tuberculosis in incarcerated populations. And there’s no reason to believe that something that’s fairly contagious like COVID-19 could be prevented with current prison protocols. I mean, how do you feed large amounts of people in potentially shared dining halls or shared hygiene facilities? Or have the same correctional staff monitoring a large number of prisoners? There’s just a huge potential for spread.

I think you raise a good point in that other municipalities and other states across the country have recognized this is a potential problem. In New York City, mayor Bill de Blasio has emphasized expedited parole and release proceedings for 200 prisoners that were deemed vulnerable. They released 23 of them on Sunday as kind of part of that initiative. So people do appreciate that this is a growing problem. But so far, although governor Hogan’s response on a number of fronts in Maryland has been positive as far as closing restaurants, bars, and non-essential businesses as of yesterday. The prison population has been overlooked. And I think part of the reason for that is kind of the cultural perception of, who are prisoners? And I think unfortunately, for some of the political system or in society, we viewed incarcerated individuals as nothing more than potential agents to commit crime.

And if you view it that way, then there is no downside to keeping people incarcerated. But when you view them not only as people who have the potential to spread disease as anyone else, but also people who are human and suffer as a consequence of these health problems, then you realize that there really are some cons to keeping people incarcerated. I think there are a number of arguments to be made from the moral standpoint as well as the financial standpoint. I don’t have data on Maryland prison systems per se, but at the federal level, it costs $99 per day per inmate to incarcerate someone. And so I think that there’s a number of arguments to be made to governor Hogan at both mitigating the cost of incarceration by releasing people and also avoiding the cost of healthcare for individuals who fall ill. I think he said-

Jaisal Noor: I think in Maryland, it’s something like $30,000 or $40,000 a year. So it costs less to put someone through college than lock them up. Can you talk about what exactly has been done for people that are incarcerated in Maryland so far? Has anything been done?

Alexander Girgi…: Yeah. Well, certainly. I mean, in response to this pandemic, to my knowledge, there has been no real action taken by the Maryland prison systems. And I think the concern has been raised by a number of individuals. But I think most public institutions and especially prisons which take care of a marginalized population, I think there’s a lot of inertia to really enacting change. So I’m not aware of any expedited proceedings of any nature that have happened as a result of this outbreak.

Jaisal Noor: And finally, I wanted to spend a few minutes talking about the lessons COVID-19 has taught us about mass incarceration in the United States. We lock up more people per capita than anyone in the world. It doesn’t keep us safer. And now we’re learning that we don’t have to necessarily to be doing this. Talk about what we’ve seen here. And I mean, this is the stuff that many of us already know if you’ve listened to formerly incarcerated, if you listened to former police and prison guard officials, they’ve been saying this for decades, obviously. But do you think this could help spur some broader change in how America deals with mass incarceration?

Alexander Girgi…: I am hopeful that this will spur a change in attitudes and how we view mass incarceration. I think that it’s clear that mass incarceration is a huge problem in creating long lasting effects on those individuals in that with inequities, particularly in access to healthcare, mental health resources and a multitude of other things that a prison sentence is not just a prison sentence, that in some cases, it can be a death sentence or guaranteeing that you may not find employment in the future. Just long lasting repercussions beyond the scope of that sentence. And I think that particularly in this instance, we have a situation in which mass incarceration is not only harming incarcerated individuals, but by potentially propagating the spread of disease, you’re harming everyone. You’re harming society as a whole if you cannot control this outbreak. And so hopefully, that will motivate people who are not just incarcerated, but beyond the incarcerated population into really strongly considering reform in prison systems and especially in prison healthcare, which has been just a long topic, which merits its own discussion for how under resourced it is.

Jaisal Noor: Well, we want to thank you so much for joining us. And keep us posted on how this develops and if… We’ll love to have you back on if there’s developments on this story. Thank you so much.

Jaisal Noor: Thank you for joining us at The Real News Network.