Cummings was a civil rights leader, a political powerhouse, and, most recently, an outspoken opponent of President Donald Trump.

Cummings was a civil rights leader, a political powerhouse, and, most recently, an outspoken opponent of President Donald Trump. 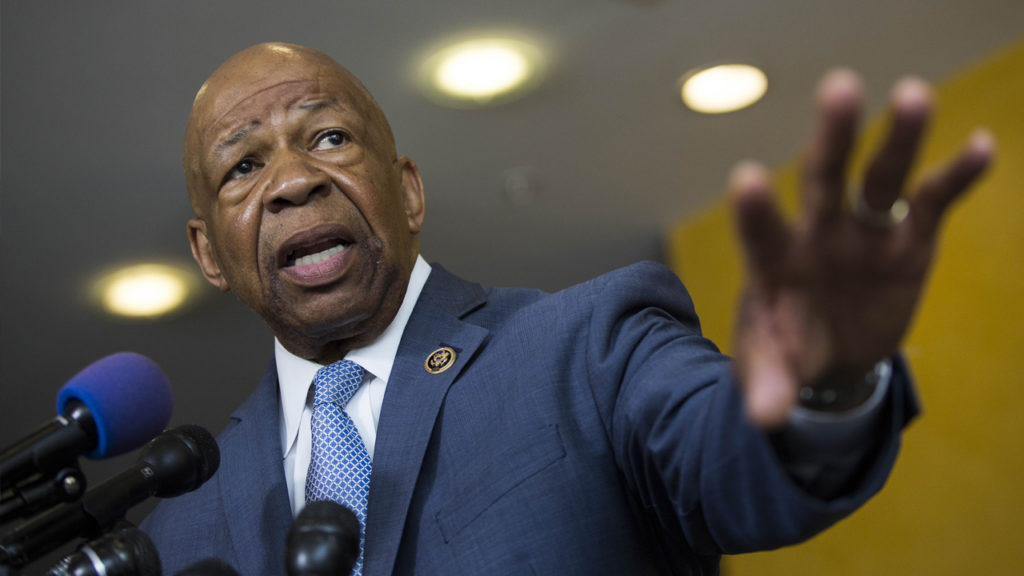 United States Representative Elijah Cummings died early Thursday morning at a Maryland hospice due to health complications. Cummings was a political powerhouse in Maryland and especially in Baltimore, the city he represented since 1996. As the Chairman of the House Oversight and Reform Committee, he was an outspoken foe of President Donald Trump. His wife Maya Rockeymoore Cummings, who serves as Chair of the Maryland Democratic party, said Cummings worked until his last breath. He was 68 years old.

Now Marc, you have a long history here in Baltimore. And we were talking a little bit before we started the cameras that you and Elijah Cummings actually kind of knew each other before you knew that you knew each other.

MARC STEINER: We think so anyway.

LISA SNOWDEN-MCCRAY: Can you talk a little bit about that?

MARC STEINER: Yeah. So it was 1962. Elijah is five years younger than me. And he was one of these young kids who were trying to integrate Riverside Pool, which is in South Baltimore, which is a really overtly racist white neighborhood. And so they chased them away; went after him. And I was part of the civic interest group which was the local arm of SNCC here in Baltimore. I was 16 then. And we went down to demonstrate and protect the kids and walked him to the pool. And so our joke between us sometimes is, “We must’ve met back then and didn’t even know it,” because he was just a little kid. He’s five years younger. I’m 16, that means he was 11 or something. So we always thought that’s where we met. We really met years later. We became to be really friendly back in the early ’80s.

MARC STEINER: Well, he was in the House of Delegates. I was running Billy Murphy’s campaign for Mayor back in 1983. And that’s my first real remembrance of intense conversations with Elijah at that point when we were running–actually the second time–a major black candidate for Mayor of Baltimore.

LISA SNOWDEN-MCCRAY: That story about him kind of integrating that pool in Baltimore shows how deeply entrenched Cummings was in the city.

LISA SNOWDEN-MCCRAY: So what does his loss mean? We’ll kind of start small and go big. What does it lost mean here in Baltimore? What kind of space does he leave to be filled here?

MARC STEINER: Well, Elijah was… Whether you agreed with everything he did or not, Elijah was a deeply spiritual force, and he was a good human being in his heart and soul. So it wasn’t just me. If I texted him, he would text back. But I hear from lots of people who didn’t know him as well as I did, and he would do the same thing. He was just always in touch with the community; never left living in the community, he always stayed in the community. He was just dedicated to that. And so that’s a real rarity. And he filled some shoes. I mean, this is a seat that was created in some sense and won by Parren Mitchell and then Kweisi Mfume, and then Elijah Cummings, so you know that’s a legacy of that seat.

And to me, he reaches back even to Parren who had a real radical vision for the future, and Elijah did too. I mean, he was caught in the establishment a lot and stuff. He’s a Democratic leader. But he had a real passion for the people and for the human rights and civil rights and ending poverty and fighting racism, and it was in his heart and soul. And he also knew how to do–despite that stuff in taking on Donald Trump and stuff–he knew how to cross the aisle when he needed to get something done. He was a very honest and special human being, no matter… Yeah, he just was.

LISA SNOWDEN-MCCRAY: Let’s talk a little bit about what he did on national stage, but I think he was influential here in Baltimore and then kind of the voice that he was, the role that he played on a national stage I think people were really looking to him. People especially Real New viewers, people here in Baltimore, were looking at him as kind of a solution to the mess that we’re kind of in with Donald Trump. So can you talk a little bit about the role that he occupied on a national stage and kind of some of the work that he did maybe even before Trump came into office?

MARC STEINER: Oh, yeah. He built himself into a Democratic powerhouse. Everybody knows the name John Lewis because John Lewis is John Lewis from SNCC. And so he had a reputation from Alabama and Selma and the rest. Elijah was only second to that in terms of notoriety inside the House; people respected him. He fought hard for bills, for economic justice. He fought hard around every racial issue in and then giving power to black men and women in Congress and lifting people up with him, and so then he became Chairman of the Oversight Committee. And in that role, he really proved himself. He took no prisoners.

When you saw him ask questions, when you saw him interrogate people–especially from the right–he just went after them and would not let go. And he tried to get to the truth. And in this process of impeachment, he became one of the political and moral leaders in the battle for impeachment eventually. I mean, he did wait for some of the Democratic leadership to come around and then he did it. But he became one of the ones who really pushed the issues with Trump. And so he always played that force as a kind of a progressive voice. Some people may argue, “Was he really a progressive voice?” I think he was.

LISA SNOWDEN-MCCRAY: I remember… I want to say it was AOC who said that he was very welcoming. Well, he first wanted to make sure that she kind of knew her stuff and then was very welcoming with her to Washington. She’s been her own very polarizing figure. So what’s next? Does anyone know kind of what the steps are to begin thinking about who can fill his gigantic shoes?

MARC STEINER: Yes. So A) let me just say that what you mentioned with AOC and Elijah that is Elijah Cummings would embrace the young people, especially young people of color and black women who came to Congress. And he would just really push them and welcome them into this space. I’m not surprised. I didn’t know that story; I should know it. I don’t know it, but I’m not surprised at the story about Elijah and AOC, I’m just not surprised at all. That is him. So what happens now? From what I understand they’re going to have a special election. The governor has to call it–I think I’m right about this–the governor has to call it. He hasn’t set a date. And then, you know the city, it’s going to be a free for all; it’s going to be a scramble. I wouldn’t be surprised if his widow, Maya Cummings, runs for that seat.

LISA SNOWDEN-MCCRAY: Oh, really an accomplished politician in her own right.

MARC STEINER: She’s Chairman of the State Democratic Party. But then you’ve got all these other people. You’ve got the most views who probably want to run. You’ve got the state senators, all of whom may run for his seat. Like Jill Carter I’m sure is considering running for the seat, I would imagine. And Mary Washington’s probably considered running for his seat. There’re numbers of people who were thinking about this. This doesn’t open up much…. Congressional seats do not open up. And the history of this state and the country is that when you’re in Congress, you get voted in election after election after election. And so when it opens up, it becomes a free for all. This is everybody’s chance to go to Congress.

LISA SNOWDEN-MCCRAY: So I feel like our job as journalists and the jobs of people here in Baltimore are going to be: how do we make the right decision? How do we kind of keep on the right track? I think.

MARC STEINER: We have a lot. We have to ask really tough questions for everybody who’s running and really push it and let the people know where these people stand, how these people stand, how effective they can be in the halls of Congress, and how they would fight for us or not fight for us. I live in his district. I know where you live; you live in this district too.

MARC STEINER: But his district, you see, is interesting. Because the bottom line is, I consider Baltimore, Maryland one of the gerrymandering capitals of the country.

LISA SNOWDEN-MCCRAY: Yes, it is.

MARC STEINER: And his district is ridiculous. I mean, it’s this huge piece of Howard County and Baltimore City where a lot of black folks live, and it snakes up in this little thin line and goes to Baltimore County in this really white conservative district. And so the danger here would be if somebody conservative and white is going to try to run up the middle and win the election. That’s not impossible. And so people have to be very vigilant about what happens; to look for an even more progressive voice to take Elijah Cummings place in Congress. And so it’s going to be a free for all battle. It’s going to be a short, quick fight and that person getting elected will be probably hard to unseat.

LISA SNOWDEN-MCCRAY: All right. Thank you so much for talking.

MARC STEINER: And that’s just my heart goes out to his wife and his kids and the people who loved him and were around him. None of us knew he was this sick. Nobody knew he was this sick. I mean, I thought… We thought he was getting better and he was going for treatments. We thought he was out because he wasn’t feeling well. And this was such a total shock to all of us who knew and loved him. And that goes beyond whatever my agreements or disagreements we might’ve had in life or in politics. He was just a generally decent, powerful, lovely human being. And he’s gone and it’s a shock and a shame, and so my heart is with the family.

LISA SNOWDEN-MCCRAY: Thank you very much for joining me today, Marc.

LISA SNOWDEN-MCCRAY: I am Lisa Snowden McCray, and you’ve been watching The Real News Network.

Marc Steiner, interim co-Editor at TRNN, is a Peabody Award-winning journalist who has spent his life working on issues of social justice. He walked his first picket line at age 13 and at age 16 became the youngest person in Maryland arrested for Civil Rights protests, in the Freedom Rides through Cambridge. As part of…