Students at the University of Manchester uncovered secret cooperation agreements between the university and Israeli arms manufacturers and now campaign to cancel the agreements, says Hudda Ammori, Chair of the Manchester BDS Campaign

Students at the University of Manchester uncovered secret cooperation agreements between the university and Israeli arms manufacturers and now campaign to cancel the agreements, says Hudda Ammori, Chair of the Manchester BDS Campaign 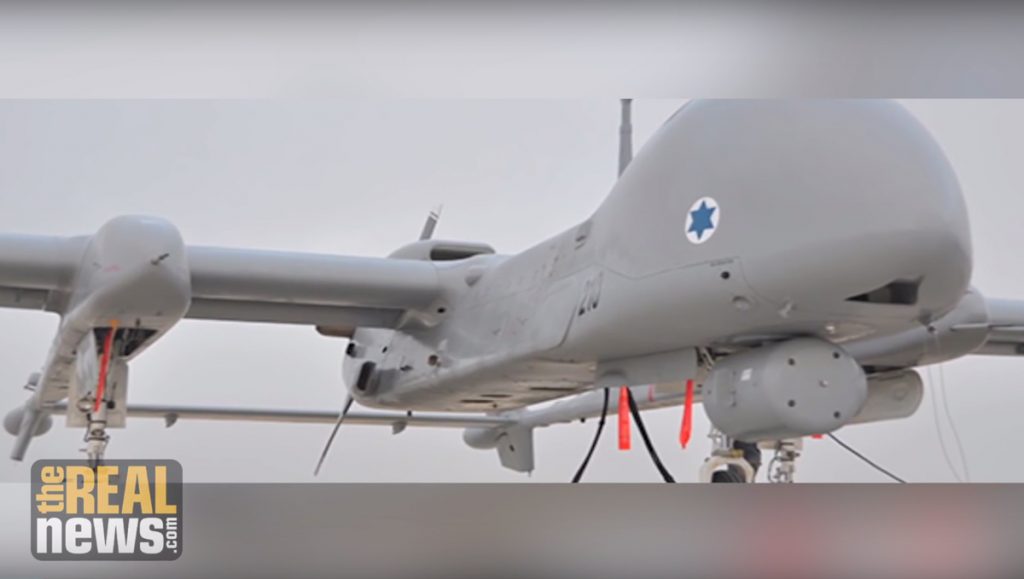 SHARMINI PERIES: It’s The Real News Network. I’m Sharmini Peries coming to you from Baltimore. New evidence exposed by the students at Manchester University in the UK shows a disturbing link between the university’s research into advanced chemistry and weapons which are used against defenseless Palestinian civilians by the Israeli military.

SPEAKER: When I came here, I did not know that my tuition fees would be used in violation of human rights in Israel against Palestinian individuals.

SHARMINI PERIES: Graphene is a semi-metallic artificial substance which can be used to produce very fast computer chips, or even advanced cooling systems for vehicles, or even providing clean drinking water. But rather than being used to improve the lives of people, the University of Manchester has decided to sign a long-term research cooperation agreement with Israeli universities tied to the largest Israeli arms company, which is Israeli Aerospace Industries. Now, IAI, as it is known, is one of the world’s major drone producing, and it boasts that its military products are tested by the Israeli military in its operations against Palestinians.

Joining us now to discuss all of this is Huda Ammori. She is the founder and chair of the BDS campaign at the University of Manchester. Thanks for joining us, Huda.

HUDA AMMORI: Thank you. Thank you very much for having me.

SHARMINI PERIES: Huda, I understand that the Manchester Student Union is the largest union in terms of the UK student bodies. It has voted to endorse the BDS movement, which is the Boycott, Divestment, and Sanctions movement against Israel, which includes a call to impose an academic boycott against Israeli universities which participate in the violation of international law. Now, despite all of this, the decision on the part of the student union, the management of the University of Manchester has gone ahead and signed this co-operation deal. Now, does this actually mean that the student union has no influence over the administration?

HUDA AMMORI: A large issue with the university management is the lack of transparency over these issues. So in order to be able to campaign and show our dismay at these at these deals with the Israeli military and the Israeli Aerospace Industries, we need to be able to know about it in the first place without having to conduct extensive research. Unfortunately, the university management has prioritized profit over these students, who are actually the biggest funders of the university, and the Vice-Chancellor Nancy Rothwell has actually stated that she is completely aware that the students are the largest funders of the university.

So in essence, we should be listened to. We should be the largest influencers of how the university conducts their commercialization ties, and where these commercial commercialization ties are going towards. However, it seems that the university management is adamant on keeping these deals behind closed doors, and in attempting to ignore the Students Union and ignore students campaigning for universities to actually adhere to their own policies of social responsibility, which right now seems to be more for their own branding than it has been it has proven to be true, because as we know, the university have extensive deals we have with the military, with the arms trade, which is completely in violation of these policies.

SHARMINI PERIES: Huda, what evidence do you have that has been gathered to prove the connection between the University of Manchester and this Israeli arms company IAI?

So this is basically, it’s concrete evidence. And we conducted a full report to prove the extensive ties of the graphene research and further research at the university to the Israeli arms trade.

SHARMINI PERIES: Give us a sense of what exactly graphene is, and what its applications are as far as, you know, the students working in this area had developed.

HUDA AMMORI: So, graphene is a wonder material. It’s 200 times stronger than steel, and yet it’s still flexible. And there’s many different applications of graphene. And the University of Manchester especially goes on about the great benefits of being able to provide clean drinking water for millions of people.

However, this is not what they’re being used for. In fact, they’re using it to apply the graphene in military drones, military drones which have been previously tested on Palestinian civilians, and which are being used to conduct violations of international law in Gaza. In fact, these drones are one of the biggest constant reminders of the illegal occupation in Gaza. They’re constantly surveilling the Palestinian population in Gaza who are trapped in the world’s largest open-air prison, who are suffering a large humanitarian crisis, and are suffering under an illegal occupation. And our university is commercializing their research towards the Israeli military, towards an illegal occupation in order to help sustain apartheid, all in order to profit. And this is from an educational institution who’s supposed to champion themselves on their values of social responsibility.

SHARMINI PERIES: Absolutely. And you made a very important point , Huda, which is that the students are the greater funders of the university. And you find these weapons that are used against the Palestinians in Gaza is absolutely against the mandate and the mission of the BDS campaign that you have been organizing, and as a student body has taken a position on. How is the university responding to this?

HUDA AMMORI: The university management has, instead of embracing the BDS campaign and working with the students to see how they can actually sustain the BDS motion throughout the whole university, have systematically discriminated against students from the BDS campaign, have ignored requests for meetings with students from the BDS campaign, and instead have met with figures such as the Israeli ambassador Mark Regev to discuss his concerns over the BDS campaign at the University of Manchester rather than sitting with the students, which we have a large support amongst the campus, students, both students and staff. Rather than engaging with her own community, she’s chosen to engage with a foreign lobby.

We’ve already held a protest outside the university’s senate meeting, and we plan on continuing our campaign until all of the links to Israel’s arms trade have ceased.

SHARMINI PERIES: All right, Huda, thank you very much. I’ve been speaking with Huda Ammori. She is the founder and chair of the BDS campaign at the University of Manchester, and now taking on another element, which is fighting against the militarization and the use of research at the university to help militarize, particularly, the Israeli military here. I thank you so much for joining us today.

HUDA AMMORI: Thank you for having me.