Dimitri Lascaris reports from the Gaza Freedom Flotilla, where he speaks to Ahed Tamimi’s aunt, who says her niece’s incarceration has only made her more determined

Dimitri Lascaris reports from the Gaza Freedom Flotilla, where he speaks to Ahed Tamimi’s aunt, who says her niece’s incarceration has only made her more determined 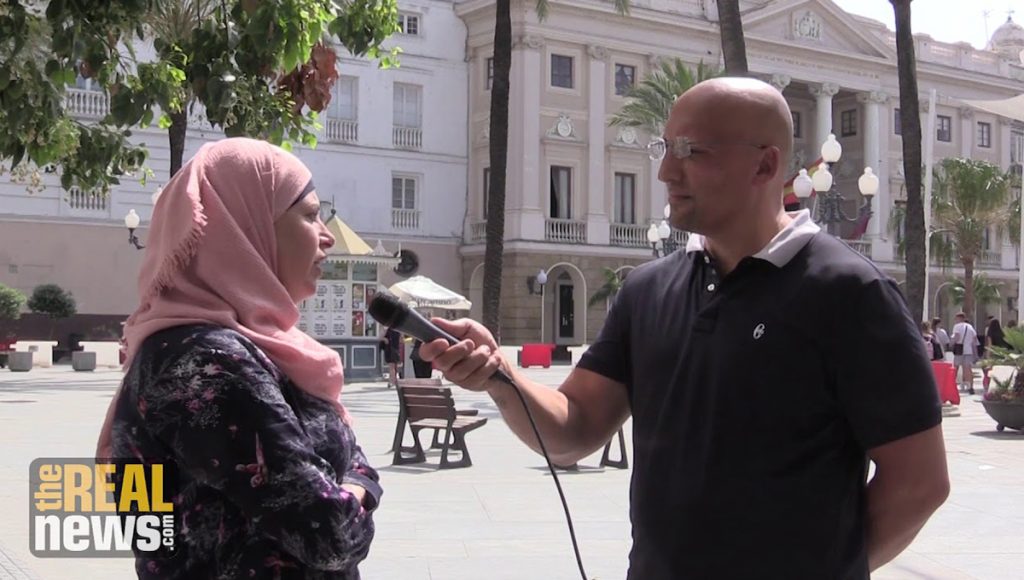 DIMITRI LASCARIS: This is Dimitri Lascaris, reporting for The Real News from Cadiz, Spain. This is Part 2 of my report from Cadiz on the Freedom Flotilla, and today I’m joined by Manal Timimi, a human rights defender from the village of Nabi Salih in the West Bank. Also the aunt of Ahed Tamimi, who is currently incarcerated by the Israeli military. Thank you very much for joining us today.

MANAL TAMIMI: Thank you for making this interview to show the world solidarity with Palestine.

DIMITRI LASCARIS: So I’d like to start by talking to you about the reasons you’ve come here. I understand one of those reasons is to show solidarity with the Freedom Flotilla. You know, I think everybody anticipates, based on prior history, that the flotilla will not make it to Gaza and that it will be intercepted by Israeli authorities probably in international waters. Some would say that in light of that inevitability, the flotilla’s mission is futile. How would you respond to that criticism?

MANAL TAMIMI: I think any way that could [put us] on the Palestinian suffering, especially people in Gaza, it could be very useful for our cause. We know definitely that the Israei going to stop this flotilla. I hope that it will be the first one to reach Gaza and be able to to break the blockade. But through our experience we know that they want, the Israel authority won’t let this happen.

So it’s very important for us as Palestinians to see that solidarity worldwide with us. This is showing that we are not alone. And yesterday when we came and we saw the solidarity, the people who was gathering to support the flotilla, the team of the flotilla and the Palestinian cause, to be honest I was so, it was moving to see them. I know that they are supporting Palestine, but the way they were supporting Palestine, the strong emotion they have toward Palestinians, it was an, it gave a strong message for us, we are four Palestinians and one Israeli came here. It shows that there are still people who believe in justice and in the humanity. Especially that there are Israeli woman, Israeli Jew woman who is on board. And also this has given a message that we all together, Palestinian and Israeli, who believe in peace, we, we can live. It’s about occupation. It’s not about religion. It’s not about nationality. It’s About a systematic genocide, ethnic cleansing against Palestinians, and actually against all injustice around the world. When you support Palestine you support all the human causes.

DIMITRI LASCARIS: You know, you, you obviously are aware that the world is transfixed, really, by the plight of Ahed Tamimi, who has been incarcerated for a substantial period of time for the, quote unquote, offense of having slapped an Israeli soldier after a member of the family, another member of the family was brutalized by the Israeli military. What is her current status in incarceration? What can we expect is going to happen next based on your experience with the Israeli military authorities?

MANAL TAMIMI: In the village, in Nabi Salih, when we raised our children we raised them how to stand for their rights. And what’s happened with Ahed, actually she was standing for her rights, defending her house. Because the incident happened in her property, in front of her house. It’s not that she went to threatening somebody lives in front of his. So she has the right to defend herself. Especially you can imagine the emotion when they told her that her classmate, her friend who was, they are together since they were child, that he was killed. Shot and killed.

It’s a very difficult the minute for anybody. That’s why Ahed reacted this way. By the end they were so caring about the soldier’s emotion that slapped him, and also they make it as a national case inside Israel. They began to call to banishment for Tamimi, banishment for Ahed. There were discussion in the government. In that time that they forget that they killed Ahed’s uncle, and also her aunt, they were killed in what’s called the First Intifada. So they are caring about a slap, and they forgive taking others lives.

So Ahed, now she’s in prison. And she’s very good, very strong. I spent some time with her and her mother in prison after they arrested me. One week after being arrested, she did last year exams in prison, and now she’s preparing to study law. And she’s reading a lot of books. Everybody in prison taking care of the Palestinian prisoners, they are taken care of her. And we expect that she will be released by the middle of August. And the best thing that she is sentenced by a judge. That means that they can’t extend her time in prison, because it’s not them administrative detention. She had the verdict, and they have the, like, it’s restricted that they have to release her.

MANAL TAMIMI: Of course. The experience of prison, it’s very difficult for adults, so what about the child? And also she went through interrogation after interrogation. When I was in jail, they used to take us to the court and brought her along with Israeli criminals and put us in another car away from the court to the prison, and it goes from 1:00, 3:00 in the morning until 12:00 at night the next day. So it’s a very exhausting experience. All these things have been with Ahed, definitely going to change her personality. But it changed to the good, or to take her to a better way, to strengthen her personality, strengthen her belief of her rights. And also to see other prisoners, especially minor prisoners, in prison. There are eight Palestinian female prisoners who were shot. There are 14-year-old girls shot with 20 bullets. Another one shot with 10 bullets. She is 15.

And so all these experience she hears, and learns from other prisoners. It will make, it won’t break her, but it will make her like, more determined that what I did, it’s not a mistake. On the contrary, it will make her go on and on this.

DIMITRI LASCARIS: Well, I want to thank you very much for joining us today. We wish you an excellent voyage back to Palestine when your work here is done.

MANAL TAMIMI: Thank you. And I hope that people, especially in the United States, stop accepting to be brainwashed and they try to educate theirselves. Stop being ignorant. Because by the end we are Palestinian, we are freedom fighters fighting for our lives, and we are not terrorists. So I hope that they will understand this.

DIMITRI LASCARIS: And this is Dimitri Lascaris, reporting from Cadiz, Spain for The Real News.