Malaysia must acknowledge that the country's rapid economic growth has not benefited all of its residents, says Philip Alston, former UN Special Rapporteur on extreme poverty and human rights.

Malaysia must acknowledge that the country's rapid economic growth has not benefited all of its residents, says Philip Alston, former UN Special Rapporteur on extreme poverty and human rights. 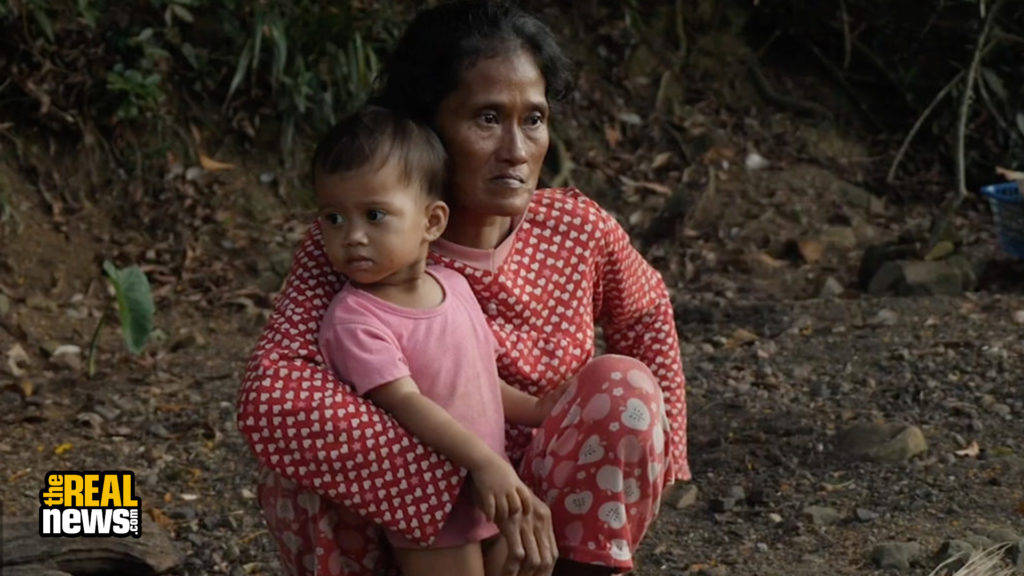 After this interview was filmed, Malaysia announced a revised poverty line measurement that increased their poverty rate from 0.4% to 5.6%, still short of the 15% found by independent analysis.

Jaisal Noor: Welcome to The Real News. I’m Jaisal Noor. Malaysia is Southwest Asia’s wealthiest, large country. It’s undergoing rapid economic growth and it’s breathtaking city skylines rival its Western counterparts. And it claims it has eradicated poverty, something activists have questioned for years. In 2019, United Nations, special repertoire and extreme poverty, Philip Alston found that Malaysia was in fact vastly under counting people living in poverty who actually numbered in the millions and include countless migrants, refugees, and stateless people.

Last year, I traveled to the island of Borneo to spend time with villagers who had lived there their entire lives, but because they were stateless and not officially Malaysian citizens, could not access healthcare, education or work legally. And they were not counted in official poverty numbers. Here’s a clip.

Kota Kinabalu is the capital of Sabah, located in the North of the Island of Borneo. The Eastern most part of Malaysia. It is a tourist destination known for its coastline, beaches and street markets. But unknown thousands live in the shadows in villages without running water or electricity. Some have lived here for generations, but because they lack official documentation, they’re denied access to government programs.

Jaisal Noor: A lack of access to schools is a major problem for stateless youth.

Speaker 3: So without having an education, without having a place where they can go to and learn, they are exposed to other things. And they become easy prey to syndicates. So we have begging syndicates. We have, I mean, there’s also human trafficking happening here.

Jaisal Noor: Being undocumented means it’s hard for them to advocate for themselves, but a local youth movement has taken up their cause, launching a campaign to halt [inaudible 00:14:39] the village’s demolition and building and running schools in the village.

So in light of the 2019 UN report, Malaysia promised to address poverty, a commitment that’s now in doubt. Well now joining us to discuss this is Philip Alston, former UN special rapid tour on extreme poverty and human rights. Thank you so much for joining us.

Jaisal Noor: So we were both in Malaysia around the same time. It’s an absolutely beautiful country, beautiful cities, beautiful people, beautiful wilderness and wildlife. But they claim that they have eradicated poverty as part of this tremendous economic growth.

We both sort of discovered a similar thing that that is simply not the case. And in light of your work, Malaysia had promised to really address poverty and study it. And then the hope was to actually do something about it. It’s been almost a year now. Talk about what’s happened over the last year.

Philip Alston: Well, it was an interesting response to my report. The immediate reaction was from the Ministry of Economic Affairs that dismissed my report and insisted that there was really no poverty in Malaysia. But within a few hours, in fact, the then prime minister, Mahathir bin Mohamad intervened along with various of his advisors, as well as Anwar Ibrahim and others. And all said, “Look, we know the poverty rate is much higher than is officially accepted. And we’re going to start work on recognizing that most. Of the independent, in fact, all of the independent assessments suggest that real poverty levels in Malaysia, somewhere around 15 to 20% of the population in contrast to the 0.4% that the government says.”

And that was acknowledged by the government ministers, the figure of 15 to 20%. What then happened was the change of government a few months ago. And that seems to have brought a complete reversion to the old line. So in their official response to me, they reiterated that they stand by the 0.4% figure. That this reflects international best practice and so on.

And then most recently there have been reports from a minister in the prime minister’s office that yes, they will be revising the rate upwards. Yes, it is higher. And yes, average income has doubled since it was last estimated at 0.4%.

But my fear is that it’s going to be another cosmetic change. It won’t be based on any detailed statistical analysis. And it will simply try to diffuse the issue by saying, “Actually it’s not 0.4%. It’s 2% or 3%.” But we’ll see. I might be surprised.

Jaisal Noor: And can you talk about why it’s so important that poverty be counted and acknowledged, especially in a country like Malaysia that has deep inequality?

Philip Alston: Well, at one level, it sounds like the concern of a bureaucrat or even worse, an academic like me, who cares what the government says about this? It’s just a matter of having policies in place and so on.

Jaisal Noor: I wanted to play another clip from my reporting in Malaysia, specifically around what you talked about, the impact of a lack of education and things like health care and being able to work illegally, especially for stateless people. Here’s that clip.

Speaker 6: We have lived here for over 40 years. We’re the ethnic marginal people. Once sea nomads, now we live by the beach. We want to live here forever to strengthen this village and keep it strong.

Jaisal Noor: Abdul Riaz Bin is the leader of [Layan Basar 00:07:06], a village facing threat of demolition. The 20 families that live here are among the hundreds of thousands of stateless people in the Malaysian state of Sabah. No country considers them citizens. Many live in deep poverty. And their plight is a stark contrast to the majority of residents of the wealthiest large country in Southeast Asia.

So you were able to visit communities across Malaysia during your trip. We have photos from your trip. So our viewers can see what you witnessed firsthand as well.

Can you talk about the plight of stateless people today? There’s an estimated around 10 million stateless people around the world, according to the UN. And they’re not counted in Malaysia, but you know, perhaps hundreds of thousands live in Malaysia.

Philip Alston: Yes. Malaysia has a curious attachment, if I can put it that way, to protecting its nationality. In other words, it’s resistant on many different aspects in terms of providing recognition of citizenship, not just to people who have crossed borders over the last 50, 60, or more years, as in Sabah for example, or people in the North of Peninsula, Malaya, but also migrant workers, refugees, and others, all face really significant problems to get any sort of recognition, any sort of documentation that’s going to enable them to live a decent life.

But when it comes to statelessness in Sabah, for example, I visited the village for example, that you have featured and saw firsthand exactly what the situation is. But I’ve visited with lots of others as well.

And the government position is that we don’t know if there are any stateless people. But we certainly don’t know how many there are, because of course you can’t count something that is illegal. And that’s really the most nonsensical position imaginable. Because if one is dealing with any sort of underground activity, whether it’s drugs or prostitution or whatever, governments always have an idea of the numbers, that’s how they plan. That’s how they do their policing and everything else.

And the figures that I saw published by the media in Sabah suggest as many as 500,000 stainless people in Sabah alone. And that’s huge given the relatively small population. What happens is that those people get no access to formal education. They get a sort of toy education where they can attend a school of sorts, but they can never graduate from it because the certificate is not going to be useful for anything. And they can’t go on then to higher levels of education. So you’re condemning future generations. And these are families that may well have been in Malaysia for 40, 50 years, are thoroughly Malaysian in every respect, but just live in no man’s land.

Jaisal Noor: And one thing I’ve witnessed in Malaysia, which was absolutely inspiring was that you had young college students, for example, in the village, we both visited, that took it upon themselves to be advocates for the stateless people. They were building a school and fighting the villages demolition, which was still moving to see that. So obviously the local people have sort of taken it in their own hands and are doing what they can.

But what role, if any, can the international community play in supporting these types of struggles?

Philip Alston: Well, I think it’s always important for any country to be reminded from the outside of what the shortcomings are in terms of its policies. I said often enough when I was in Malaysia, that I come from Australia. Australia has a significant Aboriginal population, which is very badly treated. It’s not a popular issue. Domestically, people dismiss it. And so external criticism is really essential to say, “Listen, you Australians. You’ve got a great standard of living. You’ve got large amounts of money, a thriving economy, but you have a very significant group of indigenous citizens who are being totally neglected and living miserable lives. You’ve got to do something.”

And I think the same applies to Malaysia, that Malaysia is thriving economically. It does very well on a lot of issues. But it has these gray areas that it pretends don’t exist. And I think certainly stateless people are part of that.

Indigenous peoples are another where there is a huge gap between the official policy and the way in which those indigenous people are really treated. I came across the most extraordinarily out of date attitudes where people were simply saying in relation to indigenous, “Well, those people have to come into the 21st century. They can’t keep living like that.” When the entire concept of indigeneity is closeness to the land, closeness to traditional cultures, and simply saying, “Come on new backward person, throw away all that traditional stuff and go and get a job in a local factory,” is just totally insensitive and unaware of the real challenges.

So I think there are these pockets of areas that really need to get more attention in the Malaysian media and that could actually be resolved relatively easily if the government showed goodwill. And I think the previous government had been showing goodwill. It remains to be seen if the new one will pick up on any of those areas or whether it will just be a reversion to the old business as usual.

Jaisal Noor: All right, Philip Alston, former UN special repertoire on extreme poverty and human rights. Appreciate your work and coming on to share all this valuable information with us. Thank you.

Philip Alston: Good. Thanks very much.