Panitch: Reforms can be easily thwarted by the power of business and the ideology of neoliberalism

Panitch: Reforms can be easily thwarted by the power of business and the ideology of neoliberalism 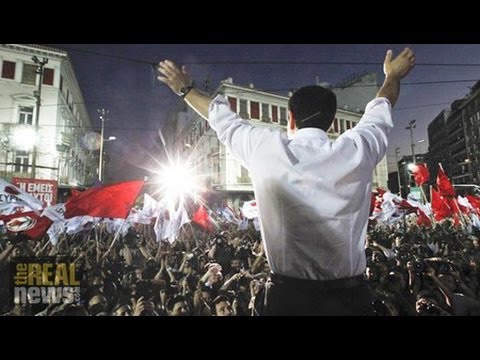 JAISAL NOOR, TRNN PRODUCER: This is The Real News Network, and I’m Jaisal Noor in Baltimore. Welcome to this latest edition of The Panitch Report.

We’re now joined by Leo Panitch. He’s a professor at York University in Toronto, author of The Making of Global Capitalism. His recent article in The Guardian is titled “Europe’s Left Has Seen How Capitalism Can Bite Back”.

Thank you so much for joining us again, Leo.

NOOR: So, in your article you talk about how perhaps the greatest illusion of the 20th-century social democrats was their belief that once reforms were won, they’d be won for good. Can you talk about how the whole idea of reform has been turned on its head? And you also cite The New York Times, which argues that these neoliberal reforms, these attacks against organized labor, really started with the social democrats, and they note one instance which happened in Germany.

PANITCH: Well, I wouldn’t put all of the blame on the social democrats. They didn’t always initiate it. They assumed that the reforms could be compatible with and even contribute to the competitive dynamism of capitalism. You could in that sense ride the tiger.

And what happened was that those reforms, over time, increasingly had to cope with an ever more expanding, dynamic, competitive global capitalism, and they were either worn away by it in the way the New Deal financial reforms could contain the enormous financial system that they’d been the incubator of through the postwar period–the finance just outgrew the New Deal regulations. Well, similarly, with the social democratic reforms in Europe, the welfare state reforms, they were blown apart by the extent to which people increasingly lived in a commodified society and got in the way, to some extent, of the competitiveness and growth of that society. In that sense, either the reforms were undone directly by the capitalist economy or social democratic politicians responded to neoliberal arguments for the need to remove those reforms to make each economy competitive by, yes, as you said, taking the lead on removing those reforms, making labor markets more flexible, defeating trade unionism, introducing all kinds of privatization and commodification in public services and public goods, etc.

NOOR: And you note the party SYRIZA in Greece has taken this notion of reform and challenged how it’s defined. And now they’re leading the polls in Greece, and they’re poised to perhaps make a splash across Europe in how they challenge these policies.

PANITCH: Yeah. SYRIZA alone has said, we’re not accepting this redefinition of reform. For a century the notion of reform was designed to be about the amelioration of market forces. And now social democratic politicians, even the former leader–the current leader of the former Communist Party in Italy, the Democratic Party, which is now actually to the right of the American Democratic Party, says he wants the government to be much more committed to introducing neoliberal reforms. So SYRIZA’s rejected that, and they’ve had enormous electoral success in doing so–not surprisingly, given what Greece has gone through in this crisis, the worst of all in Europe in terms of levels of unemployment, the growth in inequality, the cutbacks in public services, and so on. And they’ve got upwards of 40 percent of the vote in opinion polls. And there may be election this year.

Now, what SYRIZA recognizes and I think what people need to take on board is that you can’t even get back to the old type of reforms now, given how powerful business is and given how powerful the ideology of the need to remove those reforms in order to be competitive is. SYRIZA’s recognized that you need to do some more things to get even those reforms on the agenda and that those reforms will be called revolutionary, not only by business, not only by the right, but they’ll even be called revolutionary by social democratic politicians. And that involves, above all, in order not to have a capital strike when you introduce protections for people, when you bring back public services, in order for the capital not to flee, you need to introduce capital controls again. And the United States above all is worried that this crisis will lead to one country after another doing that.

Secondly, in order to make that effective and in order to be able to make decisions about what’s to be invested and where, to direct investment towards public infrastructure, which all Keynesian and even a good many former monetarist economists are calling for now, in order to do that, you probably need to take the banking system and turn it into a public utility, make it part of a democratic planning system. And SYRIZA has called for that as well, changing the function of the banks and socializing them. And it’s got enormous support in doing so.

NOOR: And the change that they could achieve is limited, depending on how many other countries, how many other forces across Europe, and, really, across the world, also adopt those same policies.

PANITCH: Well, this, then, is the kicker, isn’t it? The danger is that any attempt to do this would lead to SYRIZA being kicked out of the euro bloc, having to go back to the drachma, its old currency, and in the context of a refusal on the part of other states to give them breathing room to make that viable. Were they to be isolated and penalized for doing that, of course they would be facing great, great difficulties.

And, you know, in that sense, we kind of are back to 1917. Without in any sense wanting to minimize the way in which the Bolsheviks laid the basis for what eventually became the authoritarian communism of Stalin, to some extent, to a large extent it was their expectation in 1917 that a revolution in the weakest link would lead to a similar development in northern Europe, above all in Germany. And that didn’t happen.

And what I’m saying now, without being nearly as dramatic as talking about a revolution of that scale taking place again–the forces aren’t there for it–but certainly there would need to be a shift in the balance of political forces in northern Europe above all, but not only Germany; even Scandinavia, who were some of those who put the tightest screws on Greece and Portugal and Spain in this crisis, where they’re supposed to be, you know, the most social democratic countries, you would need a shift in the balance of forces in those countries to give Greece the breathing room to be able to see through this new reform moment, which they could get political support for in their own country. And in that sense what’s going on in Greece is really the responsibility of all of us, certainly the responsibility of progressive forces in Northern Europe.

NOOR: Leo Panitch, thank you so much for joining us. And we’ll certainly keep following this story.

PANITCH: Good to be with you again.