We now have a politically experienced president in Mexico - gone are the days when Mexico kowtows to the US. This will mean a more sovereign economic and foreign policy, says Vijay Prashad of Tricontinental Institute for Social Research

We now have a politically experienced president in Mexico - gone are the days when Mexico kowtows to the US. This will mean a more sovereign economic and foreign policy, says Vijay Prashad of Tricontinental Institute for Social Research 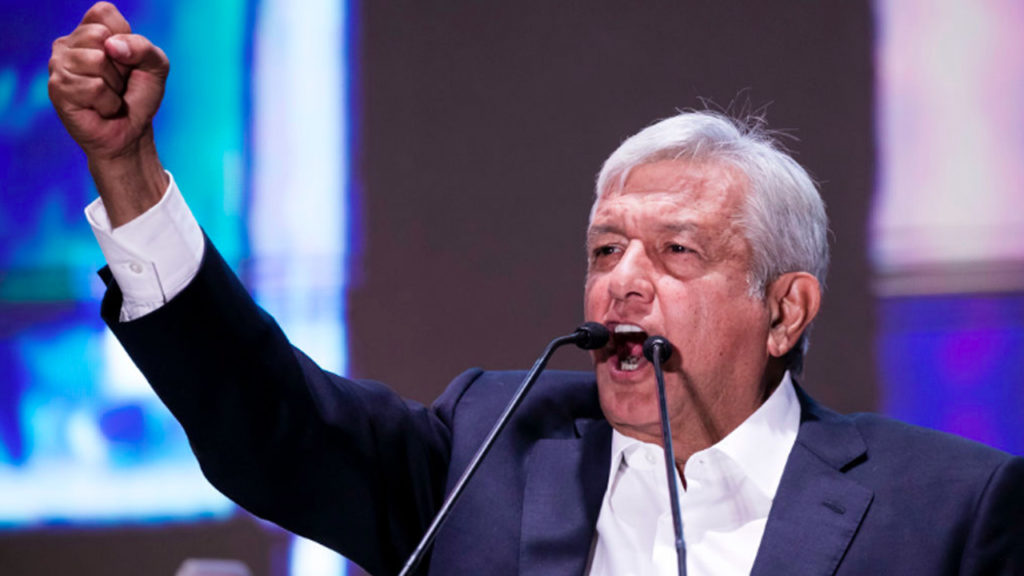 A bold transformation of Mexico’s economy is one of the many promises the newly inaugurated President Andres Manuel Lopez Obrador, known as AMLO, is promising his people. Some have deemed this the fourth transformation of Mexico. But that won’t be easy for the newly elected president. Joining me now to discuss the challenge is Vijay Prashad. He is the executive director of the Tricontinental Institute for Social Research. Vijay, good to have you back.

VIJAY PRASHAD: Thanks a lot. Great to be with you.

SHARMINI PERIES: All right. Vijay, let’s listen to a clip from AMLO in his inaugural address.

ANDRES MANUEL LOPEZ OBRADOR: The neoliberal economic policies have been a disaster. If you ask me to explain one phrase of the plan of this government, I’ll say: Wipe out corruption and impunity.

SHARMINI PERIES: All right, Vijay, now, he called this neoliberal model a disaster. And he said, you know, for the last 36 years it has not delivered anything for the people. And this was bold, because his predecessor Peña Nieto was sitting right next to him when he was delivering this address. So tell us what you make of the speech itself, and the promises made.

VIJAY PRASHAD: Well, Sharmini, firstly it’s I think a moment of celebration for people who lean to the left politically to have AMLO become the new head of state, head of government in Mexico. I think this is a very important development; it should not be underestimated. This is the third time he has attempted to become the president of Mexico. He says, I think, and with good evidence, that the previous two times the post taken away from him. This time he was able to secure a mandate. And his party also has a mandate in the legislature.

The reason I’m saying this, Sharmini, is because he made two points in the inaugural address that I think are very important and are related to the fact that he’s been at this game a long time, and that his party now has some presence in the legislature. Two points he made. The first point, I think, the important point, is he pretty much went after the question of corruption, saying that corruption is in the heart of Mexican society and in the state. I think, very importantly, he said, look, there’s no point in me opening up the files and going for long-term accountability. As he put it, there are not enough jails in Mexico to hold the corrupt. I think this is a good message he’s sending to people, that his is a forward-looking government. He also, as is typical, gave immunity to the outgoing president and his administration. I think that was a strategic move. It’s not a bad move. AMLO doesn’t have enough political power to actually go after people like his predecessor. So I think this was a good move.

The second issue that he raised is the really fundamental question. And this bears on the fact that he’s been at the political game a long time, including as the mayor of Mexico City. What he said was for the last 30 to 40 years, the economic model followed by the Mexican government, the policy slate that goes by the name neoliberalism, is utterly bankrupt and has only increased suffering and poverty for the country. You know, the beginnings of neo liberalism are in the 1980s. But in a sense, the little flower on top of the neoliberal cake was the North American Free Trade Agreement, which came into effect in 1994.

So AMLO has said quite clearly that he thinks it’s this policy slate of neoliberalism that has brought Mexico to one crisis after the other. And he’s very keen to find an exit from there. And again, the reason I said he’s been at this game a long time, it’s important to recognize that he has himself said that he can’t change everything in Mexico overnight, but he really wants to start the process toward a different kind of policy arrangement. It’s not clear exactly what that arrangement will be, but he’s at least promised to seek it out.

SHARMINI PERIES: All right, Vijay, I think you and I could agree that this is going to be one of the greatest challenges for the region, particularly because Mexico shares a border with the United States. They are not happy with anyone departing from their economic mission or their political mission. And they’ve had basically compliance from Mexico for a very long time. Do you think that the new president is going to take the risk of alienating its largest trade partner in the world?

VIJAY PRASHAD: In a sense, Sharmini, I don’t think he has a choice. I mean, if he’s going to pivot out of the neoliberal policy sphere, or at least begin the journey, he’s going to certainly cross swords with Washington, D.C. Now, whether he wants to hit the sword very hard, that’s another issue.

But let’s put something on the table quite openly. This is not an economic question. I think that would be an error to allow the technocrats, and the economists in particular, the International Monetary Fund and others to, in a sense, monopolize the conversation on the policy framework. Let’s take the question of the debt to GDP ratio. That means that the level of debt that a country is faced with, the debt against the Gross Domestic Product, Mexico’s debt to GDP is about 46 percent. You know, it’s a manageable amount. Let me give you three more debt debt to GDP ratios, to put it into context. The debt to GDP ratio of France is at 90 percent. And you know, you’ve seen recently massive demonstrations in Paris and Lille and other parts of France around the fuel price hike. France’s economy is in much worse shape than Mexico in terms of its finances. Japan and Italy, even worse. Italy, more than 120 percent is their debt to GDP ratio, and Japan it’s 153 percent debt to GDP.

And yet, Sharmini–and this is why I said it’s not about economics. And yet international capital lends money to Japan, Italy, and France at far better rates than it lends to places like Mexico. You know, this is something that I hope very much AMLO will bring onto the table and make it into something, at least, that people should discuss. Why is it that international banks lend at a higher rate of interest to countries like Mexico than to countries like Japan or France? You know, they will say it has to do with fundamentals, economic fundamentals, and this, that, and the other thing. I think it has much more to do with the power equation in the world, and the fact that certain countries, countries like Mexico, countries that are trying to assert themselves back into the international stage, they are penalized by international finance for standing up. Whereas other countries, part of the old club, the Group of Seven, seemed to get an open lane, a free ride, even though the economy is a much more difficult financial problem.

SHARMINI PERIES: All right. Finally, Vijay, there is a expectation on AMLO because the region is shifting so far to the right, and in alliance with the United States. There is an expectation on AMLO and Mexico to uphold the left values, or more progressive values, more reasonable values, in Latin America. And the pressure is enormous, largely coming from maybe Bolivia, Venezuela, Cuba. Do you think it is advisable for AMLO to stick his neck out at this point in the region?

VIJAY PRASHAD: Well, again, I think maybe he won’t have a choice. I mean, look, the United States government has made it quite clear through John Bolton’s speech in Miami that they are going to put much more pressure on what they call the Troika of Tyranny. In other words, Nicaragua, Venezuela, and Cuba. And it’s very likely that the sanctions regime will be intensified against Venezuela. It’s equally likely that they’re going to make a push against Cuba. And if there’s even a sniff of regime change activity against any of these countries, Mexico is going to be drawn into it and will have to take a position. I don’t think it’s a question of whether AMLO would like to stand up against the forces pushed by the United States, Colombia, perhaps the new government in Brazil, and so on. I don’t think it’s going to be his choice. I think he is going to be drawn into a choice that the United States government is going to force upon him.

Because if the U.S. government, for instance, attempts to conduct a regime change operation in Nicaragua, there is no question that this is going to have a bearing on Mexico, and therefore the Mexican government is going to have to take some sort of position. Gone are the days when the Mexican president has essentially treated himself as a kind of ATM machine, eating off the state’s exchequer, bowing before the United States. I feel like with this new government there is going to be a much more aggressive attempt to control corruption, to perhaps take sovereign control over Mexico’s economy, and therefore he will have to take a position if the United States threatens war in the region. That is just inevitable.

SHARMINI PERIES: Vijay, as always, very good to have you on on The Real News Network. Thank you.