Newly-elected leader Keir Starmer promised to investigate the evidence that senior party members actively undermined Jeremy Corbyn, even at the cost of weakening Labour in the general election.

Newly-elected leader Keir Starmer promised to investigate the evidence that senior party members actively undermined Jeremy Corbyn, even at the cost of weakening Labour in the general election. 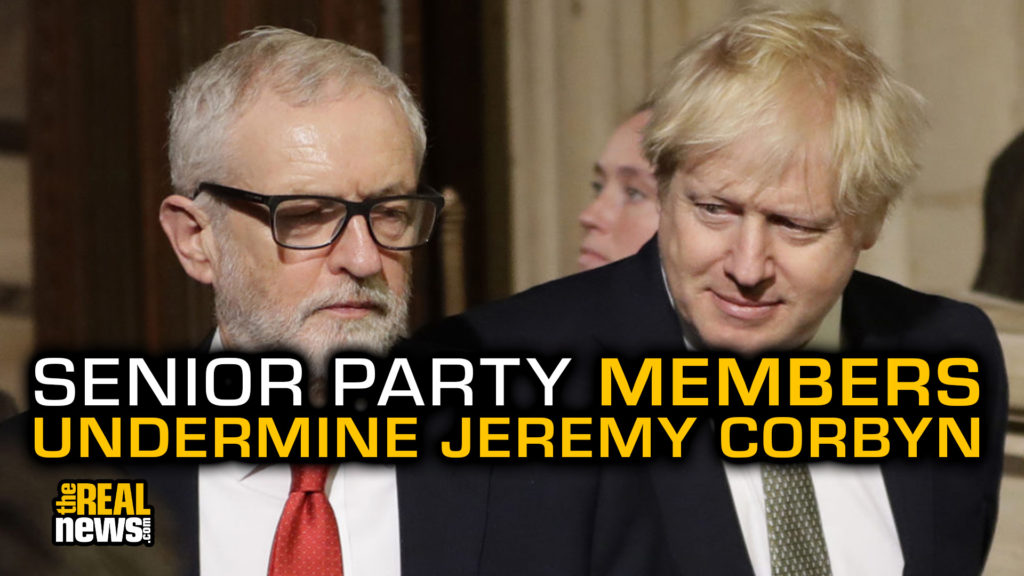 Marc Steiner: Welcome to The Real News. I’m Marc Steiner. Good to have you all with us once again.

The British Labour Party has been wrecked by this internal intrigue. As you know, we’ve been covering the issue of accusations of antisemitism that led to suspensions and expulsions of hundreds of members of the Labour Party ever since Jeremy Corbyn took leadership. Now, this newly leaked report, from the Equality and Human Rights Commission, revealed that the accusation of rampant antisemitism in the Labour Party was always a myth. It was the cover for Corbyn’s opponents to get rid of him as a leader and end the power of the left inside the party. It was literally an internal plot by senior members of the Labour Party who wanted to bring the party back to Blairism, as in Tony Blair, to something just to the left of Thatcherism. They wanted to get rid of Corbyn and his supporters so badly they were willing to see the party lose the election, which of course they did.

It’s been a huge scandal in the Labour Party. Much of the press has been ignoring it. We’re not. In response to that report, Labour Party member, John MacDonald, spoke to Sky News and had this to say.

John MacDonald: Let me just say this though. If the investigation finds that this report is accurate, these members should have to be expelled and should never be allowed back into the Labour Party ever again, because this is serious matters. Now you’ve asked me the question of how this information has gone into the report. My understanding is that this is all internal Labour Party communications. The EHRC asked that all those internal communications should be made available to them. That’s exactly what happened here.

Marc Steiner: One quote reported is from Peter Mandelson, who is the architect of New Labour from 2017. And he was quoted as saying, “I work every single day, in some small way to bring forward the end of his,” Corbyn’s, “Tenure and office. Something, however small it may be. An email, a phone call, a meeting I convene. Every day I try to do something to save the Labour Party from his leadership.”

So now what? We’re joined once again by a Dr Ghada Karmi, a British Palestinian scholar who published many books and articles on the history of politics of Palestine and is an active member of the Labour Party and Dr Karmi, welcome back. Good to have you with us here at The Real News.

Marc Steiner: So let’s just begin. This is a very interesting, revealative, what this report revealed. Talk a bit about what the internal politics here is and what happened. This was kind of stunning, to see this thing rolled out. So what the backdrop? What’s the background?

Ghada Karmi: Well, first of all, we need to look indeed at the background. You’ve outlined it quite well in your introduction. The background to this is, in reality, the refusal of a lot of the Members of Parliament, the Labour Members of Parliament, to accept Jeremy Corbyn’s leadership. This started the moment he became leader in 2015 and then into 2016. And they tried to mount, what you could only call, an internal coup by trying to replace him with another candidate. Now that maneuver failed because although a lot of, or a majority of, Labour MPs, Members of Parliament, where against him, the membership, the common membership of the Labour Party, was very supportive of him and he was reelected. So they had to find another way and they have never ceased to look for some other way to get at him and to get rid of him.

They had a conviction that Labour would never win with him as leader, on the one hand. Secondly, there are, of course, quite a lot of business interests, capitalist interests, which the Labour Party is not innocent of, that dislike the left and dislike Corbyn’s leadership because he would have been anticapitalist. There’s no question. And his politics and his economics are socialists and that is something that was a no-no for a lot of these people.

Marc Steiner: So when we last talked together, it was because you wrote something about the Palestinian members of Labour and their voice in the Labour Party. And Al Jazeera seems to have shown now that much of the delegitimization of Corbyn was done actively by the Israeli lobby in Britain. They seem to have succeeded in this, so I’m curious where you think this is going to leave the Labour Party. Here you have now the Conservative Party in full control, and Boris Johnson’s wing of the party has control of that party, and Labour could be imploding. So what would happen next?

Ghada Karmi: Well, this is a real problem. I would never of course have left the party while Corbyn was leader because I felt it was absolutely incumbent on me to support him on moral grounds, on political grounds, and on grounds that I’m a Palestinian and he is the only leader of a major western political party who’s made his support for Palestine public and unequivocal. This, as you know, it’s unbelievable. It’s unheard off. And for that reason alone, I would have supported him through thick and thin. But I also have a sense of justice. I can see that he was the victim of a witch hunt. It’s quite obvious. So basically that was my position then.

When he was removed from office, and I speak advisedly because that’s really what happened, he was hounded out of the party, and now I look at what is calling itself the Labour Party and I’m really considering leaving. Now, when you ask what’s to be done, excellent question. This is a question for all those who support the Labour Party and all members of the Labour Party. They should ask themselves, what is the party? What does it stand for? Is it going to be a pale version of the conservatives? It’s not a proper opposition and there are ideas that maybe the best thing to do is for the current party to split into two parties, if you like.

One which is publicly and clearly socialist and talks on the politics of Corbyn and John McDonnell and the left quite clearly. And the other should be those who are [inaudible 00:07:22] rights on the right wing who want to act you’re very comfortable if you say centrist. But what does it actually mean? Doesn’t mean anything. So those sorts of people would then be in that party, and it’s a very sad thing to say, but I think one has to face reality.

Marc Steiner: Very quickly here, before we end, I’m curious where you think this will take, where it could take British politics. If a party split, left went one way and the right went the other way and you sort of had this huge conservative party that dominates Britain in many ways, where do you think that would take the of future politics? I mean this is rooted in the lies about antisemitism. Antisemitism is very real. The lies [inaudible 00:08:16] told about the Labour Party were also very real when it came to antisemitism. That’s one discussion. The other discussion is, if it does split because of this, because they use this ploy to get rid of Corbyn and the left, where do you think that takes the future of your politics?

Ghada Karmi: Indeed, indeed. And of course I take the point, but you know, there comes a point where you sometimes say to yourself, you need to cut your losses. Because I can’t see that going on like this, dragging people who are on the left somehow reluctantly and against their will, to share the same party with the right wingers and the people who speak a language which is alien to the proper, the old Labour Party. It doesn’t work. In the end one has to perhaps say, let’s cut our losses. Yes, we lose time because I don’t think Labour, as it is, will get back in for a very long. So why not use the time? Say we’re going to be out of office for a while, let’s look at ourselves properly.

And yes, and let’s split. Let’s have a decent left wing party which harks back to the origins of the Labour Party and made very many great achievements. And these new liberals and the people who copy conservative policies but in a milder form, that kind of thing, they can go and do their own thing in their party. Look, it’s a counsel of despair in a way, but maybe it’s a belated recognition of reality.

Marc Steiner: Dr Karmi, it’s always a pleasure to have you with us here on The Real News. I appreciate you taking the time and staying up for us tonight to have this conversation. Look forward to many more in the future and have a great rest of the week.