30,000 teachers are on strike for better pay, smaller class size, and for a limit on the expansion for for-profit charter schools

30,000 teachers are on strike for better pay, smaller class size, and for a limit on the expansion for for-profit charter schools 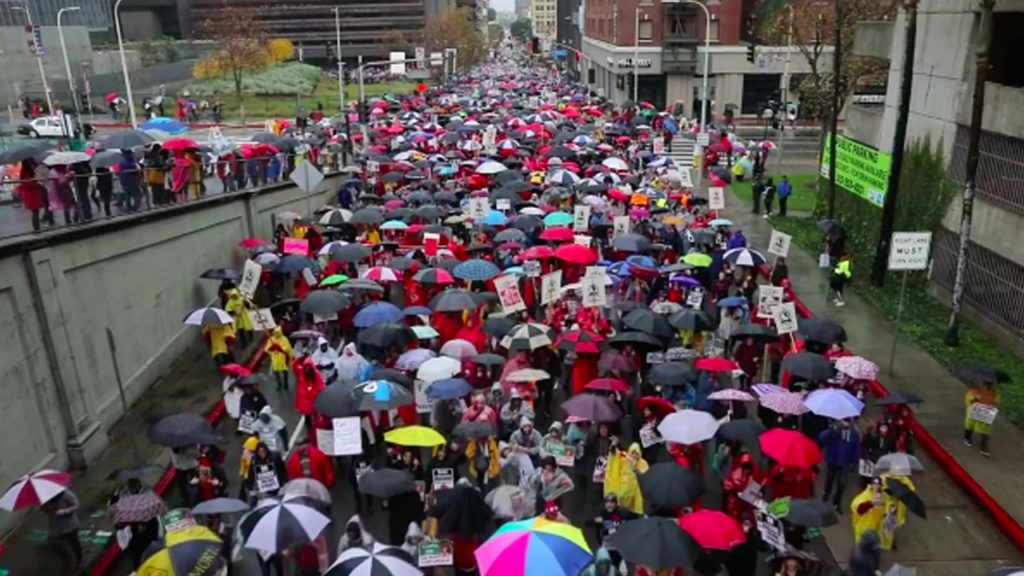 JAISAL NOOR: A historic teachers strike in Los Angeles  is set to enter its second day as more than 30,000 teachers demanding higher pay, smaller class sizes, and a cap on the expansion of privately-run charters, walked off the job in the second-largest U.S. school system, leaving hundreds of thousands of students in limbo.

ALEX CAPUTO-PEARL: So here we are on a rainy day in the richest country in the world, in the richest state in the country, in a state as blue as it can be and in a city rife with millionaires, where teachers have to go on strike to get the basics for our students.

Public education is not your plaything, billionaires. It belongs to the people of Los Angeles.

JAISAL NOOR: Some 20,000 teachers, union members and supporters gathered outside City Hall, carrying umbrellas in a rare Southern California rainstorm and chanting as they prepared to march toward district headquarters. No end date has been given for the strike.

TOBY SMITH: It wasn’t difficult for me, because I feel like we are pinned up against the wall. We have no other choice. If we don’t, they’re just going to keep cramming us in to classes, they’re going to cram the kids in like sardines. They’re going to starve us out and then charter schools will be the only schools. So it’s now or never. It’s do or die for us.

HEATHER THORNTON: We are doing this for them (the students). And so, in the end, if we end up getting them what they need, everything is worth it.

MARTHA TORRES: It was really hard for me to make the decision and, of course, because I have a family and I have three children in college. You know, it’s a sacrifice. But leaders like Martin Luther King, Cesar Chavez, Dolores Huerta, have taught me that it takes sacrifice to make a change. And this is why I’m here.

GERARDO MARQUEZ: The resources have been dwindling, the staffing has been dwindling, from my understanding, and it’s getting to a point where it’s just not sustainable. Students are suffering.

JAISAL NOOR:  Talks broke down on Friday (January 11), when the union bargaining chair said she and her fellow negotiators were “insulted” by the latest contract offer from district officials.

The union wants a 6.5 percent pay rise, more librarians, counselors and nurses on campuses, smaller class sizes and less testing, as well as a moratorium on new charter schools.

For The Real News, this is Jaisal Noor.

When Teachers Win the People Win & Put Privatization on the Run