Inside the Secret Wall Street Society of the 1% 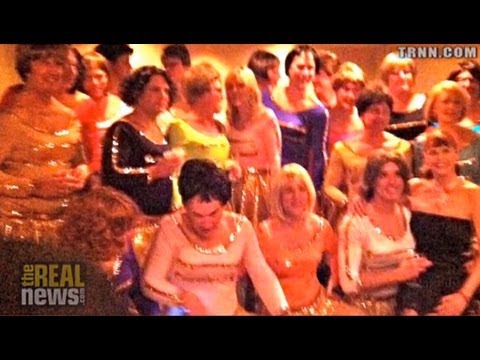 By now many of you’ve heard the story of the journalist and writer Kevin Roose. He crashed an exclusive Wall Street fraternity initiation night. We’re showing some of the photos of the party atmosphere–we’ll show them in a second–inductees in drag and performing skits. Some of those attending were the CEO of AIG, founder of Home Depot, and former mayor of New York and billionaire Michael Bloomberg.

KEVIN ROOSE, AUTHOR, YOUNG MONEY: Thanks for having me.

NOOR: So, Kevin, we wanted you to have a chance to kind of tell some of these stories of what you saw and what transpired in this party, this Wall Street party you snuck into. And we’re going to show some of the names of the people who attended this party and are part of this Wall Street fraternity, Kappa Beta Phi, and specifically the chair, billionaire Wilbur Ross. Go ahead and get right into it.

ROOSE: So this was a secret society of Wall Street executives that was 80 years old. It was founded in 1929. And it’s a society that consists of many of the people who run the global economy, who manage billions of dollars in money at hedge funds, private equity firms, and big banks.

So I heard about this, and I decided I had to at least try to go. Each year they gather for one dinner where they induct new members. Those members are required to dress up in drag, put on skits and musical acts, and basically humiliate themselves in front of the veteran members.

So I rented a tuxedo, and I went over to the hotel where it was being held, and I walked right in. It was amazing.

NOOR: And who is Wilbur Ross? And talk about your interactions with him, ’cause he basically offered to, in a way, bribe you with inside information, with being a source, if you didn’t write about this.

ROOSE: Well, Wilbur Ross is a billionaire investor. He’s been around Wall Street for a long time. He’s very well known. And he was that year’s leader of the dinner. And so I witnessed this whole thing–off-color jokes, sexist humor, jokes about the Occupy movement, and things like that. And afterwards I got outed. People found out that I was a reporter.

And Wilbur Ross sort of snuck me off into the hallway and said, look, you know, if you don’t write about this or if you take it easy on us, you know, the people in this room could be very good sources for you, and I’ll pick up the phone any time you need. So he was basically, you’re right, saying, you know, I will bribe you in order to get a better treatment out of this.

NOOR: And there’s another main character in your piece, Michael Novogratz. Who is he? And what was your interaction with him?

ROOSE: Well, he was the one who outed me. So he’s a billionaire hedge fund manager with Fortress Investment Group, and he was seated at my table at this dinner. And after, you know, most of the skits and things had played out, I was taking a picture with my phone. And he sort of stopped me and said, well, who are you? So I identified myself. I said, I’m a reporter with The New York Times. And he proceeded to sort of stand me up and say, you’re not allowed to be here, and give me your phone–he wanted to destroy the evidence. So I said, no, you know, you can’t have my phone. And he sort of got belligerent, and he was, you know, grabbing my lapels and it seemed like about to be physically violent with me. And that was when Wilbur Ross pulled me away and started offering to give me things in exchange for treating them fairly.

NOOR: And so we looked into a little bit of Novogratz’s background. He’s given thousands of dollars both to Democrats and Republicans, $2,400 in 2010 to Senate majority leader Harry Reid, $2,000 in 2012 to Senate minority leader Mitch McConnell. He’s given several thousand dollars to Democrats for Education Reform, which promotes the privatization of public education, charter schools. So a lot of these figures are giving money to both the Democrats and Republicans. And so what’s your response to that?

ROOSE: Well, this is not a political organization, Kappa Beta Phi. It’s a professional one. And everyone who works there, you know, works [inaud.] and they span the range from Democrats to Republicans, and probably, you know, everything in between. So I don’t think, you know, it’s fair to draw conclusions about the [inaud.] as a whole.

I will say that I think that there’s sort of a political class in New York made up of these wealthy Wall Street donors who tend to support both parties. They’re sort of hedging their bets. You know, whoever tends to win they want to be in league with. And so they, you know, sometimes will donate to both sides of the aisle.

NOOR: Right. And critics would say that both political parties are really protecting this group’s interests because of the vast donations they’re giving to both.

ROOSE: You could say that. I think there’s certainly evidence that Wall Street has undue influence in Washington.

But what I thought was interesting–and so this is the thesis of my book–and for my book I followed eight young bankers around for three years–was that this is actually sort of a generation gap on Wall Street, that not everyone thinks like this. This is sort of an old, obsolete generation of Wall Street executives. The new people coming up through the ranks are much more conscientious, and I think they tend to be a little bit more progressive in their politics.

NOOR: And so talk more about what you took away from this experience and more about this young generation and perhaps their interactions at events like this.

ROOSE: Well, the young people weren’t invited to events like this. This is purely for the CEO class.

But what was sort of interesting to me and one of the things that I think is very telling is that when I explained what had happened at this dinner to some of my eight young sources, you know, I expected them to be jealous or to say, you know, how do I get into this thing, but they were sort of–they were just as offended as I was. They said that’s ridiculous that something like this would go on, and they thought it sounded like sort of Occupy Wall Street, like, what the Occupy movement would have invented if they had wanted people to hate bankers even more. So they were just as embarrassed on the behalf of the members of this thing as I was.

NOOR: And so, Kevin Roose, you said, you know, there’s a new generation of these bankers coming up. And, you know, you also mention that events like this kind of give bankers a bad name. But do you think this younger generation will kind of change–will really change some of the structural problems? And you said they’re maybe perhaps more progressive. But, you know, at a time of unprecedented inequality, of social services being slashed across the country, do you think these young progressive bankers will have even the power to change the structural problems that are prevalent in our society today, the inequality?

ROOSE: No. I think that’s a much bigger issue than they’re able to deal with. That’s way above their pay grade. And I think that when it comes to reforming Wall Street, change has to come from the outside. And Wall Street’s culture is very strong, very self-protective, and I don’t think the bankers are ever willingly going to change their practices unless they’re forced to.

NOOR: Okay. Kevin Roose, thank you so much for joining us.

ROOSE: Thanks for having me.

Kevin Roose is a business and technology writer for New York magazine and NYMag.com. Previously, he was a staff reporter for the New York Times, where he covered Wall Street for the business section and for DealBook, the Times’s award-winning financial news site. He is the author of The Unlikely Disciple, and his writing has…