Recently released documents show that the Charles Koch Foundation's millions of dollars in donations to GMU were tied to control over hiring and firing of professors. The ultimate target of their conservative agenda, though, is to influence DC politics, says Bill Black

Recently released documents show that the Charles Koch Foundation's millions of dollars in donations to GMU were tied to control over hiring and firing of professors. The ultimate target of their conservative agenda, though, is to influence DC politics, says Bill Black 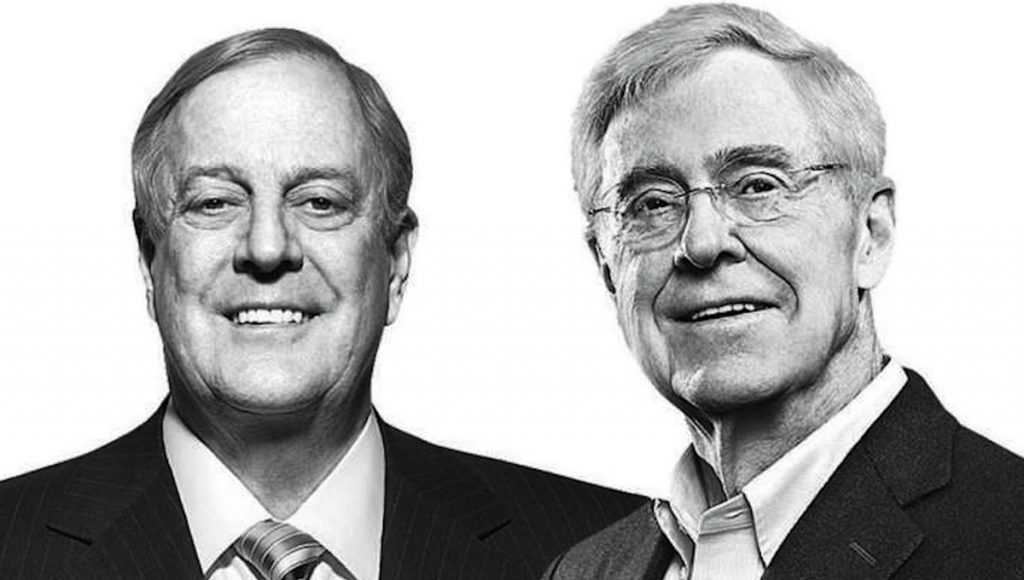 GREG WILPERT: It’s The Real News Network. I’m Greg Wilpert coming to you from Quito, Ecuador. Newly released documents show that Virginia’s largest public university, George Mason University, granted the Charles Koch Foundation a key role in the hiring and firing of professors in exchange for millions of dollars in donations. George Mason University is among the largest recipients of Koch donations. George Mason University President Angel Cabrera has long denied a quid pro quo for the donations, but had to reverse himself last week when the documents were released, issuing a statement that agreements with the Koch Foundation, quote: “fall short of the standards of academic independence I expect any gift to meet,” unquote.

Joining me to analyze the ties between the Koch brothers and universities is Bill Black. Bill is a white collar criminologist, former financial regulator, and Associate Professor of Economics and Law at the University of Missouri Kansas City. He’s also the author of the book “The Best Way to Rob a Bank Is to Own One.” Thanks for joining us again, Bill.

GREG WILPERT: So first, what can you tell us about the legality of a public university accepting donations under conditions that in effect restrict academic freedom? Specifically, should GM U President Angel Cabrera fear any legal consequences of this revelation?

BILL BLACK: None at all. But it is a violation of accreditation standards. And as a result George Mason University, were there ever a vigorous, in the periodic inspections that they have for certification, if there were vigorous inquiry he could face some questions. But none of that could send him to jail or lose him his job.

GREG WILPERT: Apparently the Koch Foundation is donating tens of millions of dollars to hundreds of universities every year. Also, this is not the first time that it was discovered that the donations were tied to specific conditions. There are several other cases. What do we know about the Koch Foundation agenda in making these kinds of donations?

BILL BLACK: So first, this goes back as an organized program to 1971, when Lewis Powell wrote his famous memorandum, sometimes called manifesto, to the Chamber of Commerce that said, look, the left is at war with corporate interests, and we’re the ones that fund, you know, the left, because they’re mostly in the universities and news programs, and such. And we own those things, or we’re the principal donors to those things, and we should take back control, and we should make sure that the dominant viewpoint taught in universities and on television programs is very, very pro-business, pro-CEO-type stuff. And his principal villain in this memorandum was Ralph Nader, because Ralph Nader, and he’s quite, Lewis Powell was quite explicit about this, that Ralph Nader was the great danger because he wanted to put corporate criminals in prison. And of course, that’s the real concern out there.

A few months later, Lewis Powell was made, appointed to the U.S. Supreme Court, and was mixed on social-type issues, but on corporate power issues was very strong, and created the antecedents that led to Citizens United and this rise of the absolute corporate dominance in fundraising. So that’s the general scoop.

Koch brothers, as you said, it’s actually the leading place they give to is George Mason University. And so first up, full disclosure, my spouse, June Carbone, was a professor at George Mason Law School during the period where it was taken over by the ultra-conservative folks, and eventually left that, under pleasant circumstances, not a [violation]. And I interviewed for a position once at George Mason University in the law school and did not get it. And that, too, is a hilarious story for another time.

But anyway, with those disclosures out there, George Mason is known for its dedication to the most extreme pro-, it’s actually anti-government, anti-democracy, pro-business, CEOs should be able to do whatever they want, basically. So roughly half of the Koch money to educational institutions has gone to George Mason University because it’s located in Washington, D.C., and because their goal is to get these people on the courts, first through judicial clerkships, and then by appointing judges. And because they want to get them into the government, in particular in high level positions. George Mason faculty, former faculty or on leave, are occupying a number of key positions in the Trump administration.

But the Kochs don’t do this alone. The Olin Foundation created all over America, the most elite universities to many not-elite universities, Olin fellows in law and economics, and almost invariably picked really extreme right-wing folks there. And then there’s this odd entity, B B &T, which is a very large regional bank, most associated with the Southeast and Florida in particular, that the crusade of that CEO, he was an Ayn Rand devotee. And so he usually works in conjunction with the Kochs, as he did at George Mason University. And BB&T gives, has given at least, I think it’s over 70 colleges money. And they have to agree to teach Ayn Rand. And a number of agreements require that the professors share an objectivist mindset and be pro- that view. So it’s just grotesque, obvious violations of independent standards.

Now, here’s the things that have, they have in common, that we are only learning through the disclosure of these documents. First, these deals are always done in secret. Second, they create entities with, as cutouts, like you do in money laundering, to hide who is making the donation. Third, the senior administration, by which I mean the heads of universities, lie consistently and claim that these documents don’t say what they say, when they obviously do say what they say, but they’re kept from disclosure.

Fourth, really interesting, these deals involve, in essence, a bribe. And the bribe is this. For example, at George Mason, the dean of the law school, an ultra, ultra right-wing guy, Henry Butler, was deemed a critical person to the whole operation, and therefore he couldn’t be fired without the approval of the Kochs. And the Koch’s delegated their authority to the Federalist Society, which is the ultra-right-wing judge and law prof and lawyer association, right? And again, they did this through cutouts to keep it secret. But you can see this is the guy on one side of the deal, Henry Butler, largely negotiating the deal. And he gets out of it, basically, you can’t be fired. In Florida State University, where BB&T took the lead in the negotiations, the guy that was the, negotiating for the university, supposedly, got a huge raise, and that, too, was decreed a critical component of the contract.

And all of these things. So they buy off these folks. So it’s a violation of academic independence on so many different levels. Now, here’s the bigger key, though, and it’s being missed in things like The Washington Post article that has just come out about it that is otherwise quite good. The thing that isn’t coming across in press accounts is it isn’t so much, I mean, it’s horrible what they do that allow the Koch brothers to actually have a vote on whether somebody gets hired and whether they get retained. But you know, the defense there is they only get 40 percent of the votes. Which is preposterous.

But far larger is this. The deal documents allow the Koch brothers and BB&T to withdraw all future money. And there’s no standard required. It’s in their absolute discretion. So guess what’s going to happen. Can you plan an educational program if you don’t know whether your money might be yanked on literally one second notice for absolutely no reason? Right, no meritorious reason? Of course you can’t. So what does this do? It creates total power. Total leverage. And remember, the folks negotiating these deals are economists who know game theory. Well, in game theoretic terms you’ve just given Koch, you’ve given BB&T absolute power, because they can destroy your academic program, literally in a blink of the eye, for no reason they have to state. It’s their absolute discretion to remove those funds. In other words, they have total power. You don’t dare piss them off.

GREG WILPERT: Okay. Well, unfortunately we’re going to have to leave it there for now. Thanks so much, Bill, to give us an updated analysis of this issue. I’m speaking to Bill Black, Associate Professor of Economics and Law at the University of Missouri Kansas City. Thanks again, Bill, for having joined us today.