This latest round of conflict including the death of Deputy Interior Minister Rodolfo Illanes is over a new mining law that would restrict the ability of cooperative miners to sign contracts with international or private interests, explains Andean Information Network Director Kathryn Ledebur

This latest round of conflict including the death of Deputy Interior Minister Rodolfo Illanes is over a new mining law that would restrict the ability of cooperative miners to sign contracts with international or private interests, explains Andean Information Network Director Kathryn Ledebur 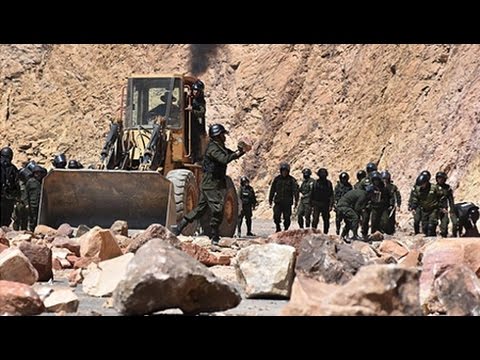 A few Bolivian miners have killed Bolivia’s Vice Minister of the Interior, Rodolfo Illanes. His body was beaten with rocks and sticks and left on the roadside. The Vice Minister was on duty attempting to negotiate with protestors who have been clashing with the police over new efforts by the government of Evo Morales to regulate the mining sector. Four miners were also killed in these clashes. Then over the weekend the government arrested four individuals suspected of the murder including Carlos Mamani, the Director of the Federation of Mining Cooperatives which had organized the protest and the roadblocks. Here’s a clip of President Evo Morales at a press conference at Cochabamba on August 27th explaining some of the issues at hand.

Within this internal difference that the cooperatives had was a political conspiracy, a conspiracy that used a claim, a supposed claim. The true cooperatives mines in Bolivia don’t know this. We expect there to be an investigation that will report the truth. To summarize, I would say once against that the national government, the government in this case, has destroyed a coup d’etat. Of this, I am certain.

PERIES: Joining us now from Bolivia to examine this conflict is Kathryn Ledebur. Kathryn is Director of the Andean Information Network which is based in Cochabamba, Bolivia. Kathryn thank you so much for joining us.

KATHRYN LEDEBUR: Thank you so much for having me.

PERIES: So Kathryn, historically the mining cooperatives have been allies of President Evo Morales’s leftist government. What has happened? Why have they turned against the government to the point of killing a Vice Minister responsible for negotiating with the miners?

LEDEBUR: Well the cooperative miners in Bolivia have always been in complicated position with the Bolivian state. Electorally they support Morales and the MAS coalition. But under the MAS coalition also fall the salary miners or the employees at the state mining company. So it has been a contentious relationship. But a relationship that electorally continues support from Morales. This is the latest of a recurring series of conflicts between cooperative miners and the state and the salaried miners that began with the [Huanuni incident] in 2006 and has occurred several times. There were incidents in the past where the cooperative miners had tied dynamite and blown up a police officer. This latest round of conflicts is over the passage on August 19th of a new mining law that would restrict their ability to sign contracts with international companies or other private interests.

And this is something they fiercely opposed. It’s a situation where conflict escalates very quickly. Protesting miners use live sticks of dynamite. Police often run out of riot control materials and begin shooting live bullets into the crowd. This literally explosive situation became much worse with the confirmed death of two miners the day before Illanes’s death and the death of another [inaud.] was in the position of negotiating. This is a very unfortunate situation. There have been deaths on both sides. A fourth miner died apparently from manipulation of dynamite. And what we’re seeing right now is a retreat in the conflict. Prosecution of officials. But also an ongoing investigation to discover if possible those responsible from the police force for the killing of miners.

PERIES: And President Evo Morales in a press conference tried to explain that this was also an effort on the part of the conservative elements of society and the right wing to destabilize his government. Would you agree with that assessment?

LEDEBUR: Well I think that its seems to be apparent that there are private mining interests that are offering contracts or that have a vested interest in engaging cooperative miners and an opposition to greater state control over mining. This would be greater state income in terms of taxes, greater environmental controls, and less abilities to make alliances or to hire these cooperative miners. Some of these cooperatives are small independent artisanal miners. And some of them are actually quite big quite profitable companies. So we’re looking at a sector here that’s quite diverse and represents multiple interests. Some genuine and others based on high profit margins.

PERIES: Again in President Evo Morales’s press conference that we ran just a few minutes ago, he explained the difference between private sector mining companies that are now trying to work within the context of the cooperative sector. Can you elaborate what he actually meant by that and how is that actually happening?

LEDEBUR: Well the situation is quite complex and it goes back to the neoliberal period in Bolivia when the bottom fell out of mining prices, structural adjustments closed the mines, forcibly relocated salaried miners and you had a largely defunct sector. And in the economic crisis these private mining individuals and then groups that arose. These loosely associated organizations and the kind of makeshift mining enterprise gradually grew and strengthened as mineral prizes in Bolivia began to increase. And so you definitely have, although you have the independent miners with interests and working largely on the systems basis, you also have international and other mining business interests that are hoping to take advantage of a large majority of the profit with very, very limited tax contributions.

So it’s been an ongoing struggle since the nationalization decree in the first year of the Morales government to place these mining organizations under regulatory control. But also to regulate the signing of contract with private companies. It’s been something that’s led to cyclical conflict every two or three years in Bolivia. And although we’re in a lull now—probably a continuation of conflict.

PERIES: And some analysts assessing the mining sector have argued that miners are seeking changes in the law because the drop in commodity prices such as in zinc, and tin, silver, gold, and that has reduced the income of the miners and the miners want a larger share of the mining revenues. Does that seem to be a factor in all of this?

But it’s important to know that the miners that are working independently on a small level may be somewhat affected. But the people who are really looking at a lot of money are these large corporate interests that are employing these miners because they can avoid pay social benefits. They can avoid complying with international environmental restrictions and so there are really two sides of the same coin. And this relative scarcity although prices have not by any means fallen to the level of their pre-2006 levels, is really going to heighten the conflict. But I think most of the conflict is based on the shift in legislation. The attempts to strengthen government regulation and I’m not seeing that that’s something that the Morales administration’s willing to backtrack on.

PERIES: And what is it that the government is trying to do with this legislation? I know one component is that it’s trying to prevent these cooperatives from directly negotiating with multinationals, taking the government out of that role which is very important to this government in particular. But it is also trying to do some regulation around labor rights and labor’s right to organize unions within this sector. Give us a sense of what that conflict is about.

LEDEBUR: Well I think that the issue of unionization and unionization within cooperatives is something that [inaud.] Cooperative Miners Association resists. But it is also a right within Bolivia. It’s a right that’s protected. It shows or reflects the possibility of–or it highlights the hierarchy that are inherent in the miners’ situation. Now the miners’ demands are rejecting this ability or the legal right within these cooperatives to unionize. But at the same time asking to have representation. For example, on the Bolivian government or public health insurance boards.

So there are a series of demands and it’s a very, very long list of demands that would be very, very hard for the government to comply with. And at the same time it really highlights these diverse interest. This mining legislation has been a long time coming. It’s an effort to bring legislation–the previous law was passed in 1997 under the Sánchez de Lozada government. Sánchez de Lozada who had private interests in a great many Bolivian mines. The focus was very, very different. This new legislation is an effort to bring it in line with the new Bolivian constitution. The 2009 constitution that stipulates that subsoil rights, mineral rights, and hydrocarbon’s rights will be negotiated between the state and private companies or international companies and not on an individual basis.

PERIES: And are the natural resources in Bolivia nationalized? And is that why the government wants to play this role in doing so?

LEDEBUR: The interests are nationalized. It’s not a pure nationalization. It wasn’t an expropriation. But it was a shift in the amount of taxes and incomes and royalties that go to the Bolivian state, shifting the bulk away from private companies in a very, very limited contribution to the Bolivian state to a more substantial contribution. It’s really interesting in terms of hydrocarbon companies that foreign interests for the most part have stayed and still view Bolivian hydrocarbon’s industry as profitable.

But what has really lagged is the mining sector and it’s because of this very, very armed resistance on the part of cooperative miners. A group that’s approximately at this point in time 60 thousand people. I think a lot of the mainstream press has overestimated the number of miners that work within the cooperatives.

PERIES: Kathryn this has been very informative. I thank you so much for joining us today and look forward to having you back on very soon.

Kathryn Ledeburis the Director of Andean Information Network in Cochabamba, Bolivia. Ledebur is a researcher, activist, and analyst of alternative livelihoods, coca and drug control strategies, Bolivian politics, United States foreign policy, and human rights issues, with over two decades of experience in Bolivia. She also served as a consultant for the Washington Office on…