How the Media Got Guatemala’s Dos Erres Massacre Wrong

Keane Bhatt: NPR received a Peabody award for their piece on the 1982 massacre, but they omit one important fact; the US directly sponsored the Guatemalan special forces that brutally killed thousands of civilians

Keane Bhatt: NPR received a Peabody award for their piece on the 1982 massacre, but they omit one important fact; the US directly sponsored the Guatemalan special forces that brutally killed thousands of civilians 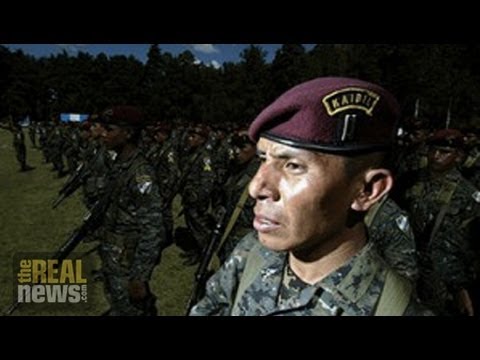 NPR’s weekly program This American Life received the Peabody Award for Excellence in Electronic Journalism. The story that won them the award was titled “What Happened at Dos Erres”. The piece highlighted the massacre of over 200 civilians by the Guatemalan special forces. But critics are saying they forgot to omit one important fact, the U.S.’s role in the massacre.

Here to unpack all of this and get into the details is Keane Bhatt. Keane is an activist on media accountability in Washington, D.C. He has worked in the U.S. and Latin America on a variety of campaigns related to community development and social justice. He is the author of the NACLA blog Manufacturing Contempt, which critically analyzes the U.S. press and its portrayal of the hemisphere.

Thanks for joining us, Keane.

KEANE BHATT, ACTIVIST, NORTH AMERICAN CONGRESS ON LATIN AMERICA: Glad to be with you. Thanks.

DESVARIEUX: So, Keane, in your piece you really come down on NPR’s program This American Life. Can you explain for our viewers what exactly did the NPR piece fail to mention that was so important?

BHATT: What it failed to mention was it didn’t provide the context, which is that in 1954 the United States basically organized, through the CIA, a coup d’état against its first democratically elected president, Jacobo Arbenz. And as a result of that overthrow, which included bombing campaigns and, you know, many thousands of deaths, you had a long string of dictatorships which were backed by the United States. And the United States helped organize its security forces to repress its own populations. So, during this massacre, the United States was actively engaged in supporting and training and arming and providing diplomatic cover for these state security forces that were engaged in what the UN later considered genocide.

DESVARIEUX: And do you see this just being unique to NPR? Or is this basically more of a disease that has permeated throughout the American press about this story?

BHATT: Yeah, this is an ongoing phenomenon. And if you look at events, for example, like the 2002 coup against President Hugo Chavez, many news reports scrub the United States’ role in organizing that coup. When you look at the poverty and the levels of desperations in Haiti, oftentimes it is completely edited out of history that in 2004 the United States kidnapped President Aristide–elected president–outright and spirited him away to the Central African Republic. If you look at Honduras, for example, the ongoing political violence and turmoil there, the United States is actively engaged in training and arming the security forces, both the police and the military, that are killing Honduran civilians with total impunity. So this is a broader phenomenon, and this is something that This American Life is a symptom of.

DESVARIEUX: And you also mention in your piece that this was a partnership between NPR and ProPublica. But ProPublica actually did attribute a lot of U.S. involvement in Guatemala to what actually happened with the massacre. Can you just highlight some of those points that ProPublica made that lacked–that was missing from the NPR piece?

BHATT: Yeah. Well, in order to understand what was lacking from Pr oPublica, it’s important to recognize how This American Life framed the United States’s role. So rather than tell its listeners that the United States was actively engaged in participating with the Guatemalan military as they presided over a scorched-earth campaign, which ended up massacring about 600 villages in 1982, what This American Life did was it said that embassy officials were unaware of what was taking place and that when they knew about ongoing killings, the United States stood by.

And what ProPublica demonstrates in its coverage is that one of the participants in that atrocity–his name is Pedro Pimentel, a Guatemalan commando–directly after that operation he was spirited away by a helicopter from Dos Erres to the School of the Americas, which is the U.S. military’s infamous training center where they have routinely trained some of the most brutal thugs and authoritarians throughout the hemisphere, including Efrain Rios Montt, the dictator of Guatemala at the time, and the current president of Guatemala, Otto Peres Molina. And so ProPublica quite frankly explained how Pedro Pimentel, who is now serving 6,000 years in prison for his role in the atrocities, later became an instructor at the School of the Americas directly after this operation.

This was excluded completely by This American Life. And, in fact, This American Life was misleading its listeners, because ProPublica, which was its media partner, explained the U.S.’s active engagement with this direct instance, and yet what This American Life states, which is false, is that the United States simply stood by once it learned about what was taking place.

DESVARIEUX: So, Keane, you actually got a chance to exchange a couple of emails with the host of This American Life, Ira Glass. What was his response to your article?

BHATT: Well, his response was interesting. What he said was, first, that one of his experts that he invited onto his program, Kate Doyle of the National Security Archives, actually discussed U.S. involvement in Guatemala through its support and training and the development of the state security apparatus there in Guatemala. And so he said to me quite frankly that he knows that history. And yet he then told me that he and his coproducers decided not to get into that, because he was afraid of throwing facts and history at his listeners. And he was also worried about how much people could absorb.

So while in retrospect he seems a little bit regretful by saying that he may have made the wrong call, he didn’t explain why he included an additional fact, an additional piece of history that is blatantly untrue, which is that the U.S. embassy was dismissive of reports of Guatemalan atrocities and that it stood by, as opposed to telling his listeners that the United States’s embassy was instrumental in providing diplomatic cover, support, and armaments for the Guatemalan commandos.

BHATT: My pleasure. Thanks for having me.