Kavanaugh Hearings: Toxic Masculinity is ‘Endemic’ to the Far Right 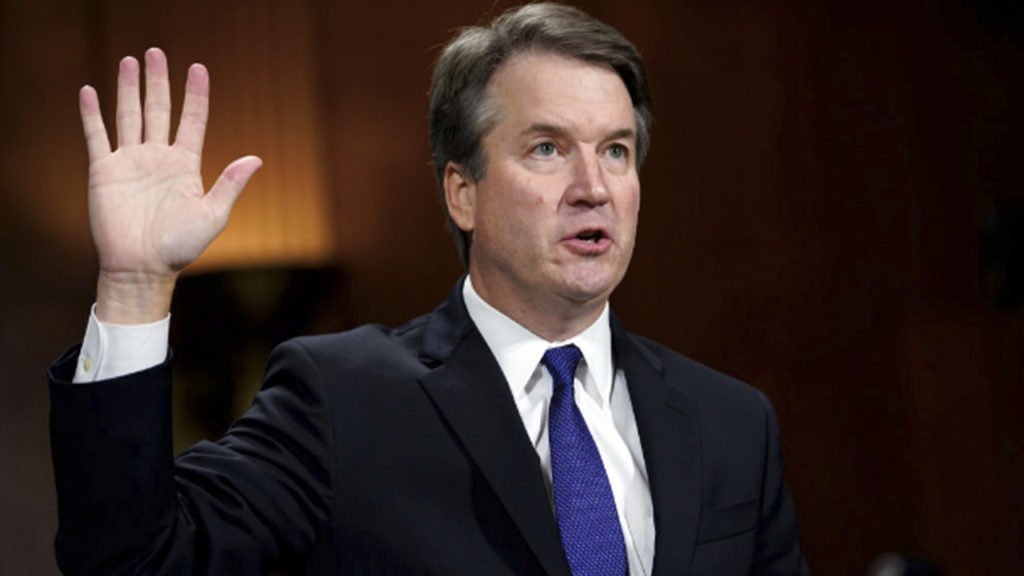 CHRISTINE BLASEY FORD: But the details about that night that bring me here today are the ones I will never forget. They have been seared into my memory and have haunted me episodically as an adult.

DHARNA NOOR: Ford is one of three women who have publicly accused Kavanaugh of sexual assault, and the results of these hearings will impact the future of the court system and the entire country. Here to talk about what that impact could be is Henry Giroux. He’s the McMaster University Chair for scholarship in the public interest, and his most recent book is American Nightmare: Facing the Challenge of Fascism. Thanks for joining us today, Henry.

DHARNA NOOR: So, again, these hearings have been really harrowing, graphic, at times really hard to listen to. Talk about what’s at stake in these hearings and what their impact could be on the Supreme Court, and what you’re calling the fascistization of America. How could they affect if Kavanaugh is confirmed? His battle is shaping up to be a major fight over how sexual assault accusations ought to be treated, and that’s not all that’s at stake.

HENRY GIROUX: Well, I think there are a number of things at stake. I mean, I think at one level what we’re seeing is a display of a kind of toxic masculinity that is actually endemic to a kind of fascist politics where women are seen as disposable, are seen as access and are seen as getting in the way, particularly when it comes to sort of articulating through their own voices the kind of suffering they’ve experienced, particularly at the expense of men who are privileged, who have the power to silence them and will absolutely do anything to do that, and are completely unremorseful about what they’re doing.

I think secondly, it seems to suggest that not only is such an attack visceral in terms of the pain and the suffering it inflicts on people who have been victims, but I think at the same time, it begins to speak to policies that might emerge out of this court that are as anti-women, anti-just as the proceedings themselves. And that’s particularly scary. I mean, I think that when any group or any element of the population is seen as so disposable, is treated with such almost visceral violence, we begin to get a whiff of something that is at work here that really isn’t being talked about, and that is a kind of fascist politics that absolutely hates democracy, hates the truth, hates public participation and is doing everything it can to hide, would seem to me, any visible element of what it might mean to take this woman’s narrative seriously and to talk, basically, about the crimes that are built into the system in ways that have to be addressed.

DHARNA NOOR: And talk about what you see as the underlying interest behind the different players here. Because, though of course, Kavanagh has displayed just rampant toxic masculinity, neither Republicans nor Democrats can really claim the moral high ground when it comes to sexual violence. Harvey Weinstein, of course, is a major contributor to the Democratic Party. So, talk about what this fight is over here.

HENRY GIROUX: That’s really an important question, because I think that what we’re dealing with here is we’re dealing with both the hard and soft versions of the same political party. I mean, these are parties that are tied to financial interests, they’re are tied to corporate power. They’re tied to elite forms of power that in many ways have created the conditions that have allowed the Supreme Court to become utterly political. I mean, what’s at stake here is it not whether justice is in some way going to be heard by virtue of what is going on in the hearings themselves, but this is a system that’s fundamentally flawed, it’s corrupt.

This is not just about the Supreme Court. The Supreme Court has become a mirror of the corruption. And it would seem to me that neither of these parties, though I think the Republican Party is far more extremist in some ways, or at least more overt about its own fascist and sexist impulses, I think that what we have here is two parties that are part of a broken political system. And until that system is fixed, to talk about whether the Supreme Court is going to nominate a more just, a more liberal, or a more compassionate justice- well, it isn’t unimportant in terms of the future. It certainly misses the point in terms of addressing the underlying structures, economic, political and social, that have contributed to the very scenario that we find ourselves in today.

DHARNA NOOR: So, many people are watching these Kavanaugh hearings, not only because of, of course, the extreme impact they could have on these three women, but if confirmed, the impact that he could have on another sort of open misogynist, President Trump. And Kavanaugh supports what people call the imperial presidency, which essentially means that when an office, a president, can’t be indicted with a crime, only impeachment can be used against him. Talk about the impact this could have on the Supreme Court and the Trump presidency, and whether or not he actually believes in this. Because he was, of course, involved in the impeachment of Bill Clinton and the investigations that went on with Clinton’s sexual misconduct with Monica Lewinsky.

HENRY GIROUX: Well, I think it testifies to his own ideological orthodoxy. I mean, he moves with his own politics, whatever these judgments serve his own interests, you find him sort of voting in a way that protects those interests. I think the notion that it can be ruled that the president is unimpeachable or isn’t accountable for the crimes that he commits, that’s straight out of the fascist playbook. I mean, let’s be honest about this. This isn’t just a bad legal insight or opinion. I mean, this is lawlessness parading as legality. And I think that when you have what I call legal illegalities at work in a system, that suggests that rather than talking about justice, we’re talking about lawlessness.

And we have to ask ourselves, what is it about that particular position that’s so dangerous? What’s so dangerous about that position is that the courts then become an arm for legitimizing the worst kinds of actions, whether we’re talking about reversing Roe v. Wade, Citizens United, I mean, all of these policies just simply reinforce an ongoing element of the fascist state, elements of the fascist state, which seems to suggest a kind of creeping, a mobilization of passions and arguments and positions and ideologies that come closer and closer to the abyss.

DHARNA NOOR: And supreme court justice nominations are sometimes seen as only relevant for policy wonks, sort of far removed from the lives of ordinary people. But you’re making an argument that this fascistization would have impact on all of us. Talk a little bit more about what that impact will be on ordinary people, and in light of these hearings, maybe let’s talk specifically about the impact on women, the way he could rule on hearings regarding equal pay, as you said, his impact on Roe v. Wade.

It’ll intensify a war against any possibility of socialized medicine and health care. It’ll intensify inequality in the country, which means that millions and millions of people will suffer by not having access to decent health care, to decent schools, to decent goods. Public goods will suffer because we’ll increasingly the privatization of everything. So, it seems to me, tax laws will be passed, for instance. That will once again mobilize, even more so, wealth and power into the hands of relatively few people and the big corporations.

So, there’s no escaping the impact on everyday life. To simply talk about this as policy, so as to suggest that these policies are abstract phenomena that don’t translate into and bear down on people’s lives, is incredible. I mean, think about what this might mean for the increasing criminalization of social problems, particularly when we talk about, as Trump does, talking about the inner cities as cultures of crime, talking about immigrants as rapists and criminals, claiming at one point prior to his election that women should be punished if they have abortions. I mean, think about what law and order means in this sense. I mean it’s right out of the playbook, it seems to me, of a fascist past.

DHARNA NOOR: And talk a little bit about what the impact would be if a Democrat was nominated instead. I mean, I think here in Baltimore, which is a city of course that’s run mostly by the Democratic Party, there’s very few Republicans in power in a city like Baltimore, people would say we are seeing some of the same impacts, the same kinds of racism, misogyny, attacks on workers. What is worse about a person like Kavanaugh versus maybe a corporate Democrat, an establishment Democrat?

HENRY GIROUX: Well, I mean, I don’t think we would want to underestimate, even in small doses, it would seem to me, a move towards a kind of liberalism that might in some way restrict the horror of the extremist politics that now dominates this country. I mean, believe me, with the ultra-right, with the people who are now dominating the Republican Party, millions of people will be thrown under the bus. And I’m not one of these people on the left who believes you have everything or you have nothing. I think that’s nonsense.

I mean, I think that any reforms that come along in the immediate present that don’t reinforce the notion that that’s the end of how we view politics, and is able to save people’s lives, is able to provide healthcare, is able in some way to provide food on people’s tables, to prevent people from dying because they have to choose between medicine and food, I’m for that. But I’m not for that as a long-standing solution. So, if we can get liberal Democrats who have a sense of compassion and in some can replace the right-wing fascist trolls, I think that’s something you have to consider is better than nothing.

DHARNA NOOR: As these hearings continue and as we continue to watch the battle over Justice Kavanaugh, we’ll definitely make sure to keep up with you, Henry. Thanks so much for coming on today.

HENRY GIROUX: Thanks for having me.

Henry A. Giroux is the Professor for Scholarship in the Public Interest at McMaster University and author. His latest books are “The Public In Peril,” and “American Nightmare: Facing the Challenge of Fascism.”