A federal judge ruled that Trump's ban on asylum applications from those who do not enter the US at a legal port of entry is in complete contravention to US and international law. Angelo Guisado of the Center for Constitutional Rights outlines the practical and legal background of the decision

A federal judge ruled that Trump's ban on asylum applications from those who do not enter the US at a legal port of entry is in complete contravention to US and international law. Angelo Guisado of the Center for Constitutional Rights outlines the practical and legal background of the decision 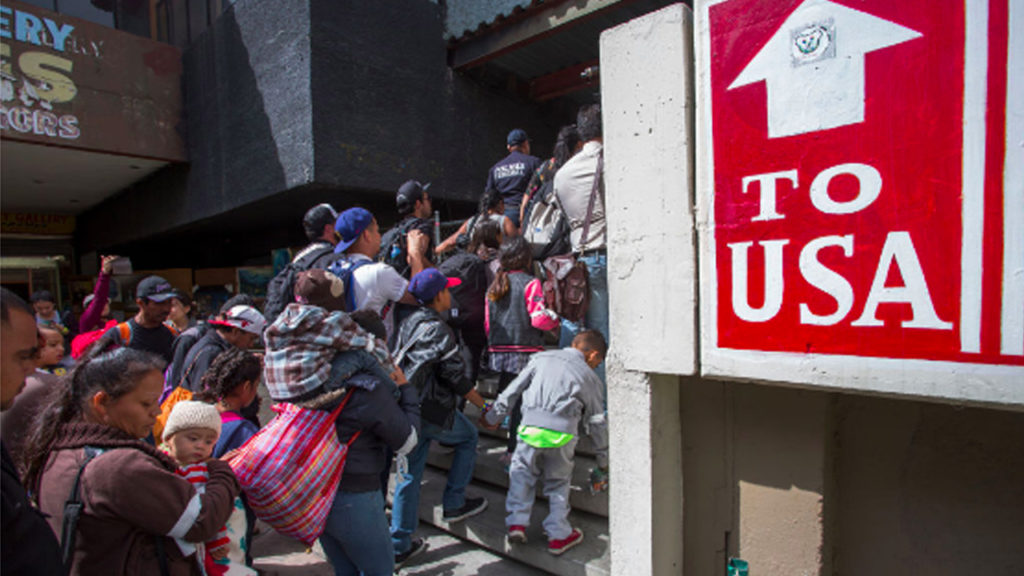 A U.S. federal judge, Jon S. Tigar of the United States District Court in San Francisco, issued a temporary restraining order last Monday to block the Trump administration from carrying out a new rule that denies asylum to those who would not enter the United States through a legal border crossing. President Trump had issued this rule on November 9, with the claim that asylum applications are overburdening U.S. border authorities. Judge Tigar’s ruling stated, “Whatever the scope of the President’s authority, he may not rewrite the immigration laws to impose a condition that Congress has expressly forbidden.”

Trump lashed back at Tigar and the Ninth Circuit Court to which he belongs.

DONALD TRUMP: I think it’s a disgrace when people file – every case gets filed in the Ninth Circuit because they know that’s not law, that’s not what this country stands for. Every case that gets filed in the Ninth Circuit, we get beaten and then we end up having to go to the Supreme Court, like the travel ban that we won. This was an Obama judge. And I’ll tell you what, it’s not going to happen like this anymore. We will win that case in the Supreme Court.

GREG WILPERT: Joining me now to analyze Trump’s latest court defeat is Angelo Guisado. He is a Staff Attorney at the Center for Constitutional Rights where he litigated cases relating to government misconduct, immigrants’ rights and racial justice. Thanks for joining us today, Angelo.

ANGELO GUISADO: Thank you for having me.

GREG WILPERT: Before turning to the legal issues, I want to take a brief look at some of the Trump administration’s factual claims. That is, Trump is arguing that six to ten thousand Central American immigrants who are traveling through Mexico in a caravan of sorts represent an invasion. What do we know of the actual numbers of asylum applications in recent years and how have they evolved?

ANGELO GUISADO: That’s a good point. So border crossings have actually fallen in the last ten years. Asylum applications are up, but it’s not by any significant margin. That the individuals are crossing together now in unison is the only thing that’s different. That migrants wish to organize to better facilitate their prospects at achieving asylum is not something the United States should withstand or frown upon.

GREG WILPERT: So related to this inflated claim of asylum applications, there’s also the claim that border officials are overburdened. What’s your response to this claim?

ANGELO GUISADO: I’ve heard, in a number of circumstances, that Customs and Border Protection, that’s the agency that’s tasked with overseeing the border, has said that it lacked capacity to process all these individuals. I know this to be false for two reasons. One, many ports of entry used to process many more individuals in the 2013, 2014 Obama years. Number two is that the United States’ obsession with a carceral response or detention for immigrants is what’s driving their capacity issues. In some circumstances, CBP and ICE issue ankle bracelets to individuals to monitor them remotely. And so, it’s of their own doing that they say they have capacity problems.

GREG WILPERT: So let’s turn to the legal issue now. What are Judge Tigar’s arguments for denying the Trump administration’s rule change? Will the administration even have a leg to stand on when they appeal the case, perhaps to the Supreme Court, as Trump has promised?

ANGELO GUISADO: No, they don’t. The president’s relying on his authority under 212(f), which he was able to use in the travel ban case, and presidents have in the past. That power is generally limited to foreign exceptions, foreign affairs and war policy. The most famous, I would say, usage of 212(f) was when Reagan used the interdiction policy against Haitian asylum seekers. What the president can’t do with his 212(f) authority is override clear congressional mandate. Indeed, the Refugee Act of 1980, and more broadly the INA, specifically states that asylum seekers can apply for asylum whether at a port of entry or whether they’re already inside the country, and that’s including if individuals cross “illegally.”

GREG WILPERT: So if Trump’s new asylum rule had been allowed to stand, or if Judge Tigar’s ruling is overruled, which seems perhaps not that likely, but you never know with the Supreme Court that we have now. What would be the practical consequence for those who are seeking asylum?

ANGELO GUISADO: It would be catastrophic, and I’ll tell you why. Despite the administration’s exhortations urging people to do it the right way, to present at ports of entry across the country, the ports of entry have actually been closed for some time, and this is not something that the larger public knows. Individuals are systematically turned away at ports of entry, being told there’s no more asylum, Trump is president now, we don’t have space for you, you have to get on a wait list. And so, though the Trump administration is asking people to do it “the correct way,” they actually can’t get in that way. And so, what the administration has done is functionally forced people to cross unlawfully, routed them into the criminal justice system, and is now attempting to deny them asylum. The effect of an overturning of Judge Tigar’s rule would be basically a total blanket ban on asylum, which would violate laws, federal and international.

GREG WILPERT: You know, actually that was going to be my next question, is about the international law. I mean, it seems that, actually it’s well known, that the U.S. is bound by international law to accept asylum applications. As a matter of fact, most other countries accept far more asylum applications relative to their population than the United States does. I’m just thinking, for example, the European Union recently, that is in the past year, accepted 700,000 asylum applicants. The United States is a tiny fraction of that, even though it’s only two thirds of the size of the European Union. So what do you make of this in terms of U.S. obligations under international law?

ANGELO GUISADO: Well, after the 1951 Refugee Convention and the ’67 protocol, Congress recognized in the 1970s that the United States had to get up to par with the rest of the international community. For that reason, it passed the Refugee Act of 1980, codifying and making federal law the United States’ obligations to accept asylum seekers and refugees. The Trump administration, in pretty much every foreign policy decision they make, is a stunning rebuke of Congressional will. I’ll add that the United States’ foreign policy in the ’70s, ’80s and ’90s towards Central America has caused many of the humanitarian crises from which these individuals are fleeing. And so, it’s doubly or compoundedly bad for that reason.

GREG WILPERT: So finally, Trump has been arguing a lot that his executive orders have always been blocked by the Ninth Circuit Court. I don’t really recall any previous president focusing on a particular circuit court the way Trump has. Is there something special about this court, or is Trump just using it as a scapegoat?

ANGELO GUISADO: Trump’s 100 percent using it as a scapegoat. I don’t know if you saw it today, but Chief Justice John Roberts of the Supreme Court issued a rejoinder to Trump’s bluster, saying that we don’t have Obama judges, we don’t have Bush judges, we have an independent judiciary. And for the Supreme Court justice to stay in the AP of all places, it should substantiate the claim that Trump’s just using this as a political ploy and as a scapegoat.

GREG WILPERT: Okay. We’re going to have to leave it there for now, but I’m sure we’ll come back to you again. I was speaking to Angelo Guisado, Staff Attorney at the Center for Constitutional Rights. Thanks again, Angelo, for having joined us today.

GREG WILPERT: And if you like Real News Network stories such as this one, please keep in mind that we have started our winter fundraiser and need your help to reach our goal of raising 400,000 dollars. Every dollar that you donate will be matched. Unlike practically all other news outlets, we do not accept support from governments or corporations. Please do what you can today.