Paul Jay speaks with john a. powell at the Tides Foundations' Momentum conference in San Francisco about racial exclusion and marginalization in America.

Paul Jay speaks with john a. powell at the Tides Foundations' Momentum conference in San Francisco about racial exclusion and marginalization in America. 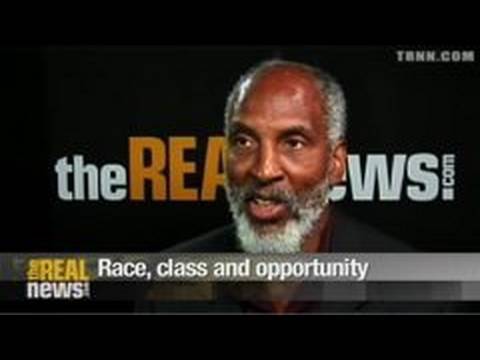 PAUL JAY, SENIOR EDITOR, TRNN: Welcome to The Real News Network. I’m Paul Jay, coming to you again from San Francisco. We’re at the Momentum Conference of the Tides Foundation. And joining us now is john powell, executive director of the Kirwan Institute for the Study of Race and Ethnicity. Thanks for joining us, john.

JOHN A. POWELL, EXEC. DIRECTOR, KIRWAN INSTITUTE: Thanks for having me, Paul.

JAY: A few years ago, a storm hit New Orleans, and during that period of Katrina there was a fascinating almost rip in the fabric of American culture when it comes to mass media. We actually discover there actually is something called race and class in America. And you had this conversation taking place on television and everywhere, and we saw images that most people don’t see every day. And after about two or three weeks, that discussion, that window closed, race and class in America kind of disappeared to the margins again, and now we’ve elected an African-American president, so I guess there’s no problem anymore. What does your research tell you about the real conditions in American cities?

POWELL: Well, American cities are extremely racialized, especially older cities like Detroit, Pittsburgh, Cleveland; less so cities like San Francisco, Seattle, Portland, Phoenix. But even—basically, what you have is cities are very racialized, meaning that people of color are much more likely to settle in cities, and opportunities that allow people to have a good life have moved away from those racialized cities. You can tell if a city’s racialized if it has an inner city. There’s no inner city in Cleveland—I mean, excuse me, in San Francisco or Seattle. But when we talk about Detroit and Cleveland, we talk about the inner city.

JAY: So what creates these inner cities, and why does it matter?

POWELL: Well, but basically it’s a confluence of things, starting, really, with the 1930s and government policies. In the 1930s, Americans in organized areas lived in the city. Essentially there were no suburbs. A few wealthy people lived in the suburbs, and we then call them bedroom communities because that’s where people slept, and they got up in the morning and went to work in the city. And then something happened. First of all, you have a large influx of African Americans and other people of color into urbanized areas. And you also had a demand for ending of formal racial segregation and isolation. At the same time you had that demand, you had the explosion of suburbs: modern suburbs became formed, really built by the federal government with support from local and state government. And those new structures, those new suburbs, were really built for white people explicitly. There was nothing subtle about it. So you had a new kind of segregation even while you have a new kind of demand for inclusion. And the result of that is what we live with today. And most people think that’s just a matter of public choice or private choice. People who want to live in the suburbs, they don’t understand why those suburbs were constructed. And, interestingly enough, it’s not just the construction of suburbs and the distribution of opportunity; it’s actually the creation of modern white America, which did not exist before the 1930s.

JAY: So why was this policy undertaken so consciously? Why the creation of white suburbs?

POWELL: Part of it was just basically—I mean, you have to remember, in the 1930s America was still in a place of explicit white supremacy. That was the official position of the country. It was a little embarrassing to have the position to be fighting Germany in World War II and have a million black soldiers participate, but that was America. That’s our history. And so, like a lot of things, we went forward with a lot of contradictions. So the federal government leaned and weighed in on racial inclusion. And at the same time, it was designed to accommodate this continuing white supremacy. So the two sort of collided. And so now we have formal—informal racial exclusion and the end of formal racial exclusion.

JAY: Well, you wouldn’t know this b-—if you look at American media, as they say, except for that two or three weeks around Katrina, and even to some extent during the election campaign. There was an interesting controversy between then-candidate Obama and Reverend Wright.

JAY: And while a lot has been made of the race speech, one of the important things about Obama’s race speech is he seems to actually be arguing against the idea of structural racism. There’s a bit of old thinking. And there’s generally, maybe, a feeling in the country, especially now that there’s a black president—and certainly it’s an achievement for America to elect a black president—but the feeling that we’ve moved on. So what does it really mean to have these impoverished inner cities in terms of opportunity and people’s lives?

POWELL: Well, it really is a heavy weight on people’s lives. I sometimes talk about people needing to run up or down escalator. And when you have opportunity, you’re on the escalator and the escalator’s moving you to opportunity. When you have lack of opportunity, you’re on the escalator, and that escalator’s moving you away from opportunity. Doesn’t mean you won’t get there; it just means it’s a lot more work. And in some ways President Obama, certainly in his speech at the NAACP, he sort of acknowledged the structural racialization that exists in America. The problem is there’s not any structural policies to move us away from that. So America, because America is sort of in love with the heroic, self-contained, isolated-individual, John Wayne beliefs that everything can be done by the individual—. And so when we talk about race in the United States and race relations, we make it an interpersonal relationship, as opposed to a set of relationships that are mediated through institutions, through highways, through schools, through jobs. And so, instead of fixing those institutions that do a lot of the work sorting out our lives, we talk about whether or not we like each other.

JAY: Well, give us some hard numbers. What are some of the comparative statistics? If you’re born in a white suburb, if you’re born in the inner-city, what are the different choices or opportunities? How is it different?

POWELL: I’ll give you two examples. There’s a recent study that came out of Harvard that basically looks at four different indicators of people living in high-concentrated poverty, in a sense, living in a high kind of concentrated poverty, living in a certain type of household, having a certain type of job. The children born in those situation lose one year of educational attainment and four IQ points in the first five or six years of their lives. And essentially they never make it up. Now, who are those children? Something like 96 percent of those children are African-American. So you can describe this in terms of, well, this is just poverty. No. Poor whites don’t live—poor urban whites are six to seven times less likely to live in deep, concentrated poverty, which means where opportunity is not. Let me give you another example. I recently moved to Columbus, Ohio, with my family. My daughter went to school there where, when she graduated from high school, her class—100 percent of her class graduated, 100 percent went to college. In Detroit, 25 percent—less than 25 percent of the students in that school system graduated from high school. If you’re an African-American boy, less than 20 percent graduated from high school. So if nothing else, you put a school, a child, and a school system in Detroit, it’s an 80 percent—almost 80 percent chance they will not finish high school.

POWELL: Well, you know, that’s hard to say, but, basically, you know, it plays well in America, you know, the idea that we’re all responsible for our own lives. None of us are only responsible for our own lives. Malcolm Gladwell’s new book, Outlier, he talks about that, if you look at any success story—and there’s a whole network behind that success story, whether you’re talking about Bill Gates or whether you’re talking about Gordie Howe. And what we do in America is that—and especially what I would call the new racial discourse—it’s the belief that every individual stands and fall on his own. And yet, as I suggested, if you go to the school system where I live, it’s going to be very hard to fall. If you go to the school system in Detroit, it’s going to be very hard to succeed.

JAY: In other words, not through someone’s great individual choice.

JAY: It was a structural—.

POWELL: Right, and exploded the white middle class. Before, in the ’30s, the white middle class was anemic. The white middle class was actually something that the federal government invested in and created this structure for them to live in and excluded people of color. That’s never been changed. That’s never been changed. When George Romney became the secretary of Housing under Nixon, he said the only way to really address this problem is to open up the suburbs. Now, it’s not really the suburbs versus the city that’s at issue; it’s the question of how we structure the geography of opportunity in America. And right now it is [inaudible] suburbs, but also older suburbs.

john a. powell is Director of the Haas Institute for a Fair and Inclusive Society and Professor of Law, African American, and Ethnic Studies at the University of California, Berkeley. He previously served as the Executive Director at the Kirwan Institute for the Study of Race and Ethnicity at Ohio State University and the Institute…