#MillionStudentMarch: Thousands Walkout Across The Country

As thousands demonstrate at over 100 campuses across the country, TRNN speaks to UC Berkeley student Lauren Butler who explains why students are fighting against tuition, debt and racism. Photo: Brandon Yadegari

As thousands demonstrate at over 100 campuses across the country, TRNN speaks to UC Berkeley student Lauren Butler who explains why students are fighting against tuition, debt and racism. Photo: Brandon Yadegari 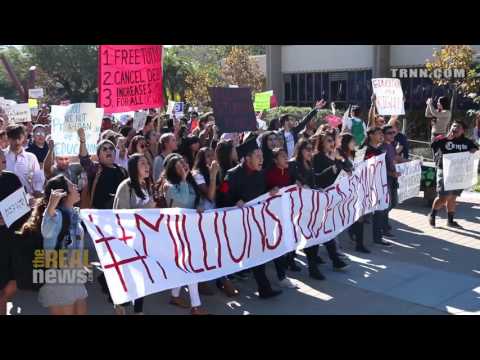 JAISAL NOOR, TRNN: The Million Student March. Thousands walked out of classes at over 100 campuses across the country on Thursday. Among their demands included addressing racial injustice, free tuition at college campuses and universities, cancellation of the country’s $1.2 trillion student debt, and a $15 wage for all university workers.

LAUREN BUTLER: Wall Street has infiltrated our education system. Education has been commodified, you know, and put on Wall Street to be gambled with.

BUTLER: People are disadvantaged in education because of their race. And the same system that oppresses us all as students, the same corporate system that benefits off of the creation of debt, you know, essentially the creation of poverty, right, these are the same people that like to exploit people of color, black people especially.

NOOR: Butler also cites the activism at the University of Missouri earlier this week that led to the toppling of two key university officials demonstrates the potential of students to achieve their demands when they are organized.

BUTLER: We’re really seeing a shift in the power dynamics, right. So what Missouri really taught us is that we have to speak their language to get a reaction out of them, right, and we did that. And the reactions of the students, you know, the reactions of the individual students, these disgusting hate crimes and acts of terror against the black students, it really is just reflective of this larger white supremacist power structure.

NOOR: The protests at Mizzou have spread to campuses across the country. On Thursday the dean of Claremont McKenna College in California stepped down in the face of growing protests from students of color and LGBTQ students who say they’ve been marginalized by the administration. [Inaud.] are also sending a message to the 2016 presidential candidates.

While Hillary Clinton’s proposal to address college affordability only seeks to reduce the cost of tuition, Bernie Sanders’ proposal to eliminate college tuition at four-year public universities through a tax on Wall Street sets him apart from other Democratic candidates. But only the Green Party’s Jill Stein has fully endorsed the students’ demands.

BUTLER: I mean, our demands are the same. From anyone we demand tuition, free college education that’s completely tuition-free. We don’t demand a tuition freeze, you know, where you stop raising, you promise to not raise it for a couple years. We demand the complete abolishing of tuition. We demand a cancellation of student debt. We demand that they take our debt off the market, they take it out of this realm where it’s able to be profited off of, where it has some kind of value, and we demand that our campus workers not be paid poverty wages. So whoever the president is going to be we’re going to demand and hold them to these standards.