Jeff Sessions to Annouce DACA Decision at 11AM EST

800,000 youth who have benefited from the program could be targeted for deportation

800,000 youth who have benefited from the program could be targeted for deportation 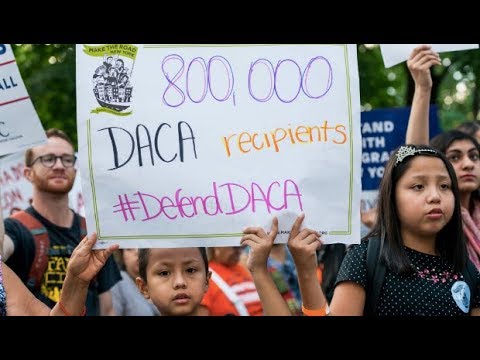 JAISAL NOOR: Donald Trump is considering ending DACA, a program that allowed young, undocumented immigrants who came to the United States with their parents to stay in the country, saying he’ll have a decision by Tuesday.

DONALD TRUMP: Sometime today or over the weekend, we’ll have a decision.

JAISAL NOOR: Since the campaign trail, Donald Trump has waged what many call a war on immigrants. Calling Mexicans rapists, scapegoating immigrants for crimes that studies show at lower rates than native born Americans. He’s escalated ICE raids and deportations, which have created a backlog in immigration courts and slowed his promise to deport record numbers of immigrants.

He recently pardoned the notorious Arizona sheriff Joe Arpaio, who was found guilty of contempt of court for refusing to racially profile immigrants. The release of the RAISE act paired with increased ICE arrests are aimed at terrorizing immigrant communities to discourage organizing and ripen the conditions for more intense economic exploitation. Maintaining cheap labor is the primary concern of the elites.

MARIELA MARTINEZ: Allowing or galvanizing employers to use the immigration system to retaliate against workers who ask for the bare minimum, which is the minimum wage and their labor rights, further drives the industry underground. It’s not as if this is going to create jobs for U.S. citizens, but it is going to stop workers who are undocumented from reporting labor abuses, which makes it easier for employers to pay them less, to continue to exploit them. And it drives down wages for everybody in the industry because if you have one employer that is a good employer that’s paying people the minimum wage, hiring folks with documentation, doing everything right, but that person’s competing with an underground industry where workers aren’t reporting wages and that’s bad for that good employer.

JAISAL NOOR: Some 800,000 people have taken advantage of DACA. In Los Angeles, recipients of DACA reacted with dismay to the reports.

LUIS: Well, just right off the bat, right now, my heart is sunk. I don’t feel any emotions. I’ve been dealing with this for weeks now and the uncertainty is just … it’s killing me at this point.

DIANA: [Spanish] I feel that America is my life. America is my home. America has given me many opportunities, and it’s all I know. I came here when I was a one-year-old and my future is here.

JAISAL NOOR: The overwhelming majority of dreamers came from Mexico and other Latin American countries. Over 200,000 of them live in California, while Texas has over 100,000. New York, Illinois, and Florida also have large number of DACA recipients. Undocumented immigrants who entered the country as children have been able to qualify for DACA if they were under the age of 31 when then program began on June 5, 2012. They would of have to have entered the United States before they turned 16, however, and to have lived continuously in the country since June 5, 2007.

Stay tuned to TheRealNews.com for more on the story.