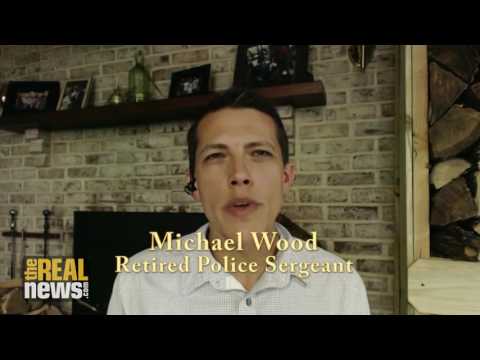 [SOUNDS OF GUNFIRE AND CHAOS]

UNIDENTIFIED WITNESS: I was walking and the sniper just started shooting. Man, like all of the cops were getting shot. Man, I just saw cops, like bending over man.

JAISAL NOOR, TRNN: At least one shooter, operating from a rooftop in Dallas, killed five police officers and wounded six more in an attack during one of the multitude of peaceful protests across the country against the killing of two black men by police this week:  Alton Sterling in Louisiana and Philando Castile in Minnesota.

BARACK OBAMA: There has been a vicious, calculated and despicable attack on law enforcement.

NOOR: Michael Wood is a retired Baltimore Police Sergeant and Marine Veteran. In the wake of the Baltimore uprising he blew the whistle on the routine abuse carried out with impunity, he witnessed during his time in Baltimore Police Department. He explains why he was not surprised by the Dallas attack.

MICHAEL WOOD: We have a culture that from the beginning has been disproportionate and been oppressive to persons of color, and women, and other minorities. We have a system in which criminal justice is an oxymoron. We have a society that trumps up the second amendment as this big right that we have and that right is to have this weaponry so cops can be killed. That’s literally the purpose of the second amendment. And we have state sanctioned murder all over the country with a blue wall of silence and justice not being done. So I’m completely baffled by why anyone is surprised by all of this.

WOOD: That’s why cops don’t realize their actions are racist, because they’re not feeling racists, but the system is throughout history, built off of slave catching, and if that’s your root then everything that cascades from that is poisonous. But we’re taught that it’s true and those are the ways we should do things but we’re not stopping to think about what that means.

WOOD: The fundamental problem with our structure is that we serve politicians and politicians serve people with money and power. So you automatically have an oligarchy built in when civilians don’t have control of the police department. So policing has gone through it’s entire history in America and said this is what we will do for you. This is what will make you safer. This is what we’re going to do. It’s never stopped to say what do the people want us to do? How can we serve you? So that’s a fundamental different approach.

NOOR: Woods and others have argued that policing needs fundamental change. It must be controlled by the community it serves.

WOOD: That is being called for around the nation, especially in Oakland right now, we’re calling for civilian review boards. This is why my fundamental model shift of having a panel, a community board in charge of the police department, separate from the politics and separate from the money is really a necessity that this is just highlighting but really we knew this.

NOOR: Woods also responded to comments, such as this tweet from former congressmen Joe Walsh who blamed the attack on the black lives matter movement.

WOOD: Whenever you’re blaming the oppressed, you’re being manipulated by the oppressor or you are the oppressor. So if you’re telling the weak and the oppressed to stop standing up for themselves and instead resort for the oppressors I want you to think about what side of this argument you’re on.

NOOR: As a former member of the U.S. Marines, Woods also responds to the news that the killed suspect was an army vet.

WOOD: And that’s a thing I’ve talked about when it comes to my military experience that when you think about it, they took a 17-year-old kid in this country as a pathway to middle class to send him to war to be subjected to that. To be trained as a killer to carry out these other aspects of life and then you come back and whether it’s policing or not or military, you have problems adapting to normality. And it could be something like that. But you have mental illness across the country and while that is a causation for a lot of these things, this why we have to focus on making it not so easy for those type of people or even people in general to get weapons where you can carry out this level of destruction so easily. Because are we really going to think we can fix the psychology and fix the entire dynamic of our war profiteering and our lack of resources for mental health and lack of training for policing? We’re not going to be able to control that and fix that so easily.

So we have to start making it way, way harder for people to get their weapons and exercise their second amendment rights so they can get in a position to kill cops. I want everybody to remember that. The second amendment is about killing cops. And now that cops are being killed by people exercising their second amendment ideology, we are surprised or like what is going on here? This conversation is like all things we completely know and we’re willfully remaining ignorant of.

NOOR: For ongoing coverage of the Dallas attack go to TheRealNews.com. This is Jaisal Noor.

DISCLAIMER: Please note that transcripts for The Real News Network are typed from a  recording of the program. TRNN cannot guarantee their complete accuracy.