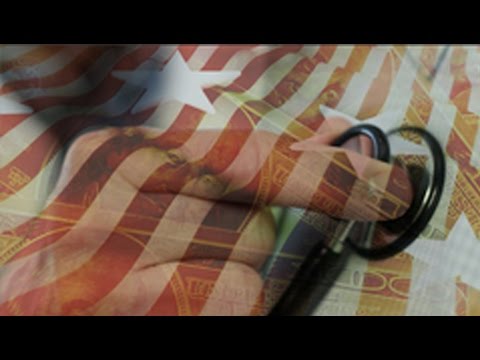 DONALD TRUMP: We’re also working closely with the House and Senate Republicans to repeal and replace Obamacare. The House plan will expand choice, lower costs, and ensure healthcare access for all.

JAISAL NOOR: Even as the non-partisan U.S. Congressional Budget Office concluded 24 million Americans would lose healthcare over the next decade, under a Republican plan to dismantle Obamacare. Trump administration officials disagreed with the findings, even as a leaked secret White House analysis puts that number even higher. As many as 26 million could lose their healthcare, according to internal White House documents, obtained by Politico.

JAISAL NOOR: The CBO did find the Republican plan would save taxpayers $377 billion, but as the Intercept reports, that savings would be absorbed into Trump’s massive military spending increase.

DONALD TRUMP: We’re also going to send Congress a budget request that will include one of the largest increases to defense spending in our history, and General-slash-Secretary Mattis is extremely upset about that.

For example, average premiums would rise 20% to 25% for 64-year-olds. Meanwhile, the rich benefit. Including a $50,000 tax cut to millionaires, $7 million in tax breaks to the wealthiest households, while enriching the drug and insurance industries, according to analysis by the Center on Budget and Policy Priorities.

NANCY PELOSI: The CBO has reported that the Republican bill pushes 24 million people out of healthcare, off of health coverage. This is a remarkable figure. It speaks so eloquently to the cruelty of the bill that the Speaker calls, “an act of mercy”. I don’t know if he thinks it’s an act of mercy to all the people who will lose coverage, to people who will lose jobs, to the hospitals that they have to close down, especially in rural areas.

JAISAL NOOR: Obamacare enabled about 20 million previously uninsured Americans to obtain medical insurance. But some, like Dr. Steffie Woolhandler, a professor, physician and co-founder of Physicians for a National Healthcare Program, say Democrats blundered by not endorsing universal healthcare.

Dr. STEFFIE WOOLHANDLER: And of course, the big mistake the Democrats made, was by saying that they were going to defend the status quo, and pretending that Obamacare had solved the problem, when it really hadn’t. It helped a little bit, but it had not solved the problem. And the American people, three years into the full implementation of Obamacare, at the end of 2016, said that’s not true. You have not solved the problems. We have these problems, and President Trump made it look like that was the fault of the Obamacare legislation.

What the Democrats needed to be saying then, and need to be saying now is, we are moving forward from Obamacare, to truly universal care, to a single payer plan. That would have energized the electorate. That would’ve really provided something for white working class people, and it would’ve helped prevent this very disastrous swing of white working class families into the Trump… the ranks of Trump voters.