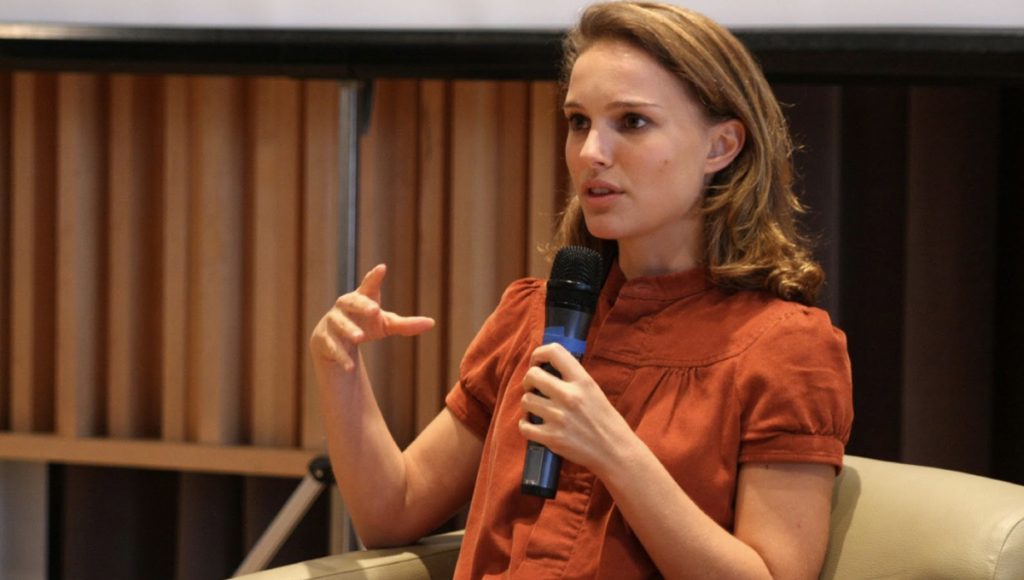 BEN NORTON: It’s The Real News, I’m Ben Norton. As the Israeli military continues to mow down unarmed protesters in the illegally occupied Gaza Strip on a weekly basis, some of Israel’s most high profile supporters have begun to speak out against its brutal oppression of the Palestinians. Early this April, one of Hollywood’s biggest actresses, Natalie Portman, ignited a firestorm when she announced that she would not be attending a major awards ceremony in Israel, in protest of its violence in Gaza. In response, the Genesis Prize Foundation, which oversees what has been described as the Jewish Nobel Prize, canceled its prize ceremony in Israel. Natalie Portman has been a longtime vocal supporter of Israel. She was born in Jerusalem, and has dual US and Israeli citizenship. But now, even some of the most prominent liberal Zionists, that is, liberal supporters of the Zionist political movement and the Israeli ethnostate, even they are publicly criticizing Israel’s extreme right-wing government.

Since March 30th, Palestinians living in the illegally Israeli besieged Gaza Strip have held weekly peaceful demonstrations, as part of what they call The Great March of Return. The Israeli military has responded by massacring unarmed protesters. At least forty Palestinians have been killed, including journalists and young teenagers. More than five thousand Gazans have been injured. Israeli soldiers have shot thousands of unarmed Palestinians with live ammunition. Joining us to discuss the growing divide between what liberal Zionists say about Israel and what’s actually happening on the ground is Ali Abunimah. Ali Abunimah is the director of the Electronic Intifada. He is also the author of several books about Israel/Palestine. Thanks for joining us.

BEN NORTON: So, Ali what do you think about this whole media scandal with Natalie Portman? We saw that, in fact, a member of Israel’s far right ruling party, Likud, in fact called for Portman to be stripped of her Israeli citizenship. What does this say about the Israeli government and some of its liberal supporters?

ALI ABUNIMAH: Yeah, and not just for her to be stripped of her Israeli citizenship, but she’s been denounced even as an anti-Semite by people in Israel, and government figures, and so on. The key point here isn’t really about Natalie Portman as a person, because I’ve seen people debating this back and forth, about whether Natalie Portman deserves praise, people noting that Natalie Portman has a long history of supporting Israel. And even after she announced she wouldn’t go, she denounced the Boycott, Divestment, and Sanctions movement, and so on. Here’s the key point. It’s not whether Natalie Portman did a brave and noble thing or not. The key point is that Israel has become so toxic, that even someone like Natalie Portman, an Israeli-born, lifelong supporter of Israel, feels she has to distance herself, that Israel is too toxic for her to be associated with. That, I think, is the shift that Israel finds really terrifying, and why there has been this enraged reaction towards her. Because she’s supposed to be the one who shows up no matter what.

BEN NORTON: Yeah, and this is also interesting because we’ve seen some other figures, it’s not just Natalie Portman. In fact, we saw other actresses- specifically, Sarah Silverman recently spoke out over Ahed Tamimi, the young Palestinian teenager who was arrested for slapping an Israeli soldier after that Israeli soldier shot her cousin in the face and permanently disfigured him. But Sarah Silverman spoke out, and similarly there was this discussion that was ignited about liberal Zionists and Israel. What is your take? Do you think that this is a kind of cynical PR move by some of these actresses and large figures and celebrities, or do you think that we are actually seeing a political shift within the Zionist movement?

ALI ABUNIMAH: Well, I think we are seeing a shift. But let’s take the question of Ahed Tamimi. This is the seventeen-year-old girl who was sentenced to eight months by an Israeli military tribunal for slapping and shoving heavily armed Israeli occupation soldiers. I think the case of Ahed Tamimi really shows the divide between Israel as it really is, and its liberal supporters in the West, and in the US, as they imagine or want it to be. Because the brutal Israeli repression, not just of Ahed Tamimi, but of her family, was aimed very much at the domestic Israeli audience. This was just, you know, Israeli politicians showing how tough they can be on Palestinians- that we’re going to punish the whole family, we’re going to put them through hell, and they deserve it. And they have been absolutely cheered and supported in doing that by the Israeli public, there’s been very little dissent about this in Israel.

So, that’s a really good political strategy for Israeli politicians, but it’s greeted with utter horror in the outside world, including by many liberal supporters of Israel, like Sarah Silverman, who I think, look at what Israel is doing, and are really troubled and really unable to defend it. And if we think of Sarah Silverman as sort of a representative, or avatar, for a kind of millennial American mainstream liberal sensibility, this shift is much broader. And we’ve seen poll after poll in recent years showing that the base of the Democratic Party- not the leaders, we can talk about them separately- but the base of the Democratic Party has really been shifting, particularly in the younger generations, away from support for Israel, and toward support for Palestinians.

And this shift has also been true, or especially true, among young American Jews. And we see that also represented in the protests that have been going on, led by groups like If Not Now, at the offices of Senators Feinstein, and Ben Cardin, and others, demanding that these big-name Democrats, or progressive Democrats, speak out against the massacre in Gaza. And I think, if you’re a Sarah Silverman, or a Natalie Portman, you just can’t ignore that.

BEN NORTON: Yeah, and we also saw that here, in New York City, on Thursday, on April 26th, that a dozen protesters from Jewish Voice for Peace were arrested outside Chuck Schumer’s office, the New York senator, demanding that he speak out over Gaza. And this is actually a good segue, because I was going to ask you about Bernie Sanders. We’ve seen a slight shift in some of Bernie Sanders’ rhetoric. I mean, of course, he didn’t speak out very forcefully about Palestine, and there’s a lot he could definitely grow on when it comes to this issue. But in the past few years, Bernie Sanders has been saying more and more, and in fact, his team recently released a video about what’s been going on in Gaza, and the extreme repression of the Palestinians here. We’re going to play a clip of this video from the Bernie Sanders office.

BERNIE SANDERS: After being blockaded for over a decade, the situation in Gaza is now a humanitarian disaster.

LIBBY LENKINSKI: There is an increasing gap in the story that Israel tells itself about what it’s doing vis-a-vis Palestinians, and the story that the rest of the world tells. And Gaza is that gap.

BEN NORTON: So, can you respond to that video, Ali? What do you think?

ALI ABUNIMAH: Well, I think the bottom line is, it’s good for Bernie Sanders to be speaking about this, it’s good for him to be drawing attention to the catastrophe in Gaza, which is an Israeli-made catastrophe, supported by the United States and the European Union and their client Arab regimes. So, we need to make that clear. That’s a good thing. But also, I think, you know, let’s look at the big picture. I think that we can still be very critical of some of the things Bernie Sanders says. You know, he blows hot and cold. Some of his positions are good, some of them are not so good. His statement- he was one of the very few US lawmakers to actually speak out against Israel’s violence in Gaza. So, that’s definitely a checkmark on the positive side.

But I think the story here isn’t so much about the imperfections of Bernie Sanders, it is more about the fact that, again, he is responding to a base and to a grassroots movement that has pushed him, and pushed others in this direction, and it’s making it easier and safer for politicians like Sanders to speak out on this. I think the message here is that if Bernie Sanders isn’t saying enough, isn’t doing enough, isn’t being forceful enough, then the message is to push more. And I think where liberal and progressive politicians like Sanders have to continue to be challenged is on BDS, Boycott, Divestment, and Sanctions. Because while Sanders has made some good statements about Gaza, challenged Hillary Clinton over her support for Israel during the 2016 campaign, he has not endorsed, and in fact, has even spoken against the non-violent, Palestinian-led, Boycott Divestment and Sanctions movement, which aims to put pressure on Israel to respect Palestinian rights, and is of course, modeled on the boycott of apartheid South Africa, which was very successful.

So, I think the challenge we have to put to liberals and liberal politicians is, well, if you don’t support armed struggle for Palestinians, and you don’t see the US government doing what it’s supposed to do, the UN doing what it’s supposed to do, how can you oppose BDS? It’s immoral, it’s unethical to tell people who are in this dire situation that you’re talking about that they’re not allowed to do anything, that they’re not allowed to resist. And if BDS is a non-violent form of resistance, one that challenges directly the sources of power that give Israel the ability to perpetuate this injustice, then on what possible legal and moral grounds could you oppose it? I think that’s the next step to challenge these progressives. Yes, it’s good that they’re speaking out, it’s good that they’re drawing attention to Gaza, but we want more than statements. We want action, and we want them to support and participate in that action.

BEN NORTON: Well, unfortunately, we’ll have to end it there, Ali. And that’s actually a good note to end on. And what’s interesting about this whole affair is that Natalie Portman said that she opposes BDS, and was not refusing to go to a ceremony as an act of BDS. But what’s funny is, I think it demonstrates the effectiveness of BDS. She is effectively boycotting Israel. But thanks for your insight and your analysis, Ali.