Israeli Shootings of Palestinians in Gaza “A Violation of International Law” 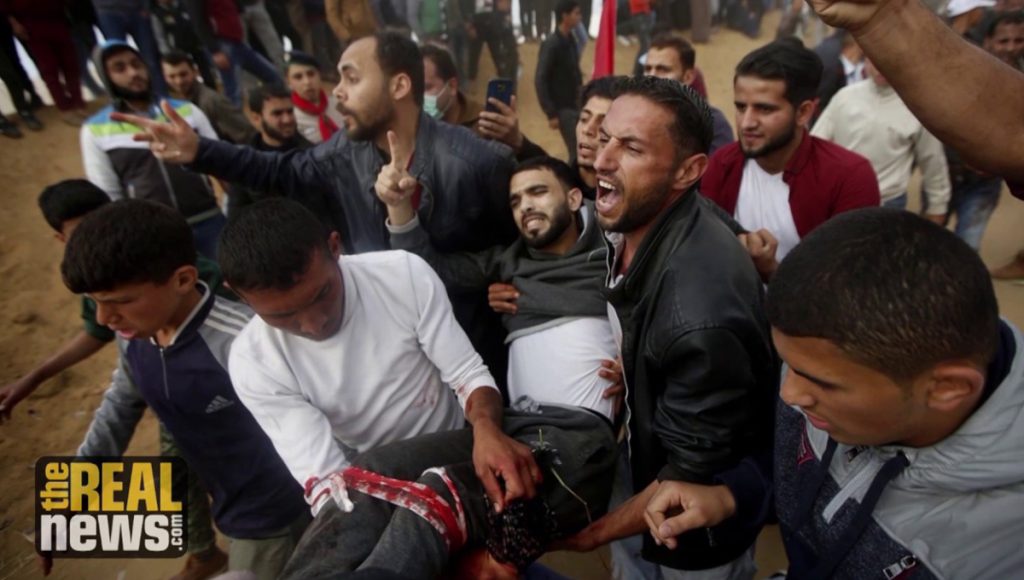 The Palestinian March of Return in Gaza continues, with tens of thousands of protesters demanding the right to leave what has become known as the world’s largest open-air prison, the Gaza Strip. The protests are expected to culminate to next week on May 15, the 70th anniversary of the Palestinian Nakba, the deportation of most of the native population of Palestine, and what has now become the state of Israel. Israel is also celebrating its formation of the state of Israel on that very day. It is going to be a [inaudible] one.

In the meantime in Gaza, so far Israeli forces have killed over 50 Palestinian protesters and injured thousands. U.N. Special Rapporteur Michael Lynk has stated that what the state of Israel is doing by killing and maiming protesters by sniper fire is a violation of international law, when he was interviewed on Canadian television, CTV. Let’s have a listen.

MICHAEL LYNK: Most of the demonstrations, in fact, are unarmed demonstrations. The violence is really coming from the fire shot at them by the Israeli Defense Forces. Over the last, past five Fridays we’ve had over 40 Palestinians killed by Israeli forces and over 5000 Israeli-Palestinians injured, including 1700 by live fire. Of the 1700, a number of these are very devastating injuries. The doctors at the main hospitals in Gaza are reporting that high velocity ammunition has been used against them. They’re reporting patients who are arriving with significant internal damage to tissue, to bone, to organs, where there are narrow entry wounds by the ammunition and high velocity, large exit wounds, which, all of which, I must point out, probably is in violation of international law. It’s an international law, it’s a violation of international law for security forces of any sort to be using deadly ammunition fire against unarmed protesters.

Deadly, lethal fire is only permitted as a last resort, only when the lives or safety of the security forces are in imminent threat of either danger or or death. It doesn’t appear to be the case so far in these five Fridays of demonstrations.

SHARMINI PERIES: Shortly after this interview was aired, the Special Repertoire Lynk, Michael Lynk, was accused of lying by the Israeli lobby group Honest Reporting Canada, who also condemned CTV for giving the special repertoire airtime. The special rapporteur’s claims made in that interview and also in a press release was supported in a recent statement by Amnesty International and Human Rights Watch, both of whom says that Israel was unlawfully killing and maiming protesters, and several other U.N. officials and of UN bodies joined and issued another statement, which was a joint press statement, which lays out in more detail why international human rights experts consider IDF sniper fire a potential violation of international law.

And to add to that, the prosecutor of the International Criminal Court has warned Israel that its action could constitute crimes under the Rome Statute. Here is how U.S. ambassador to the UN Nikki Haley responded to the UN reports on the Israeli violence in Gaza, and trying to blame the deaths that have occurred thus far on the Palestinian Hamas party.

NIKKI HALEY: Anyone who truly cares about children in Gaza should insist that Hamas immediately stop using children as cannon fodder in its conflict with Israel.

SHARMINI PERIES: With us to discuss all of this is Peter Larson. He has just returned from Gaza, and he represents an organization in Canada called Canada Talks Israel Palestine. Dr. Peter Larson writes a regular blog on the same site, and a frequent visitor to the region. Peter, I thank you so much for joining us.

PETER LARSON: Good to be here, thank you.

SHARMINI PERIES: So, Peter, you’ve just returned from Gaza, where you observed the March of Return, and took some videos, which we will be showing our viewers as we do this interview. I want to ask you, when pro-Israeli groups say that Palestinians are threatening Israel with their protests, what did you see?

PETER LARSON: Sharmini, I went to one, of their five camps, I went to one of them on the 27th of April. And what I saw is really, there’s two parts to the demonstration. Part of it is just tents, bands, marches, food, clowns, right at the edge of the Israeli no-go zone. And then there are some young people who are more aggressive, more courageous, who are daring to oppose the Israelis, yelling at them, throwing stones and so on. But as I could see, none of the stones could come anywhere near to reaching the Israelis.

SHARMINI PERIES: All right. Did you see any weapons on any of them?

PETER LARSON: I didn’t see that. I didn’t see any weapons. I didn’t see any stones. And I didn’t, I guess if you could call a a tire a weapon, I saw them pulling some tires down to burn them to the front. But even the front, Israel has established two separate fences on the Palestinian side. So even at the first fence it’s still another 50 or 60 yards from the perimeter fence, which defines Gaza.

SHARMINI PERIES: Right. So as we heard, Nikki Haley, the U.S. ambassador at the UN, and when you listen to Prime Minister Netanyahu from Israel and other spokespeople from the government of Israel you are hearing more or less the same talking points. Trying to blame Hamas for what is going on on the ground, which they repeatedly say is violence that is created by Hamas. And what we have been witnessing, what people on the ground and what our reporters on the ground are reporting, is that largely the protesters are peaceful, free of any form of violence, well away from the actual military installations on the Israeli side. So tell us, you know, is this picture that I’ve just painted correct? What are your observations in terms of who’s organizing the march? Is it peaceful, and is Hamas involved?

PETER LARSON: There is a committee, a public committee, that includes groups like student unions, the bar association, women’s groups. It also includes Hamas and Fatah and so on, political parties. Hamas and Fatah are definitely involved. But based on what I saw, they are big political parties that have lots of members. It would be surprising if they weren’t involved. But it certainly did not appear to me that they were running it, or coordinating it. On the contrary.

SHARMINI PERIES: And were you witness to any of the sniper fires that was going on? I mean, we now have a total of about 50 people that have been killed by sniper fire. Did you witness any of that?

PETER LARSON: Yes I did. I’m not qualified to tell the difference between sniper and regular, a regular rifle. I certainly heard gunfire I could hear some automatic fire, and the occasional individual shots. I saw someone get hit about 50 meters in front of me, and I was standing at that time, I would say, 250 meters away from the Israeli perimeter fence. And we were being bombarded by tear gas, also I would estimate a good 250 meters into the, what the Israelis call the no-go area. Israel has unilaterally decided that Palestinians are not allowed to approach the perimeter fence, and so just doing so by the Palestinians is an act of defiance.

SHARMINI PERIES: Now, the interview that is in controversy in Canada, with the Special Rapporteur Lynk, who is on, who was on CTV. Now, he’s been condemned for saying what he did, plus CTV is being charged with giving the special rapporteur airtime. Tell us what you thought of the interview that took place on CTV, and was it, what was he saying anything that was contrary to what you witnessed?

PETER LARSON: No, I think what Michael Lynk was saying was quite consistent with what I saw. Now, I wasn’t at every place. There are five different camps. It was on different days. I went to two different camps on two different days. And in general I saw, it was overwhelming. You might be interested, I have a note here that I received from one of the organizers, who points out that this is a huge thing, and there are lots of young people in Gaza who are very unhappy and very angry. It’s not really possible to control them. The organizing committee has said that they don’t really approve of burning Israeli flags. They don’t really approve of flying those kites over and trying to cause, because they don’t really affect anything, and they just give a bad image. They don’t really approve of trying to break through the fence. But there are lots of young people who have been born in Gaza, never allowed to exit from it, and they can’t really control everybody.

SHARMINI PERIES: And Peter, you have a letter that was just sent to you by one of the organizers. Can you tell us who it is and read it for us?

PETER LARSON: Sure. So that’s from Ahmed Ratima. He’s 35-year-old Palestinian man from Gaza. He published a blog post in December saying we should do something like this. And it kind of caught fire. Because I think, and this is my view, not his, and my words, not his, that it’s clear that yes, the Palestinians in Gaza are going to resolve the problem, they have to have outside support. He says that this desperation is fueling this new generation. We’re not going back. He intends it to be entirely peaceful.

I think one of the most striking images in my mind is the picture of Hamas leaders standing up addressing the crowd, and behind them pictures of Martin Luther King, Mahatma Gandhi, and Nelson Mandela. Now, for Hamas to be openly talking about nonviolent resistance is quite extraordinary. And I think that captures the sense of the organizing committee. We’ll see. I think there will be doubters. But I think we’ll see going forward that there has been a sea change here in an understanding of how this issue has to be addressed.

PETER LARSON: My pleasure. Have a good day.