Jafar Farah, the head of the Mossawa Center for equal rights for Palestinian citizens of Israel, speaks to TRNN about how police shattered his knee and how what happened to him fits into more general colonial practices among the Israeli police

Jafar Farah, the head of the Mossawa Center for equal rights for Palestinian citizens of Israel, speaks to TRNN about how police shattered his knee and how what happened to him fits into more general colonial practices among the Israeli police 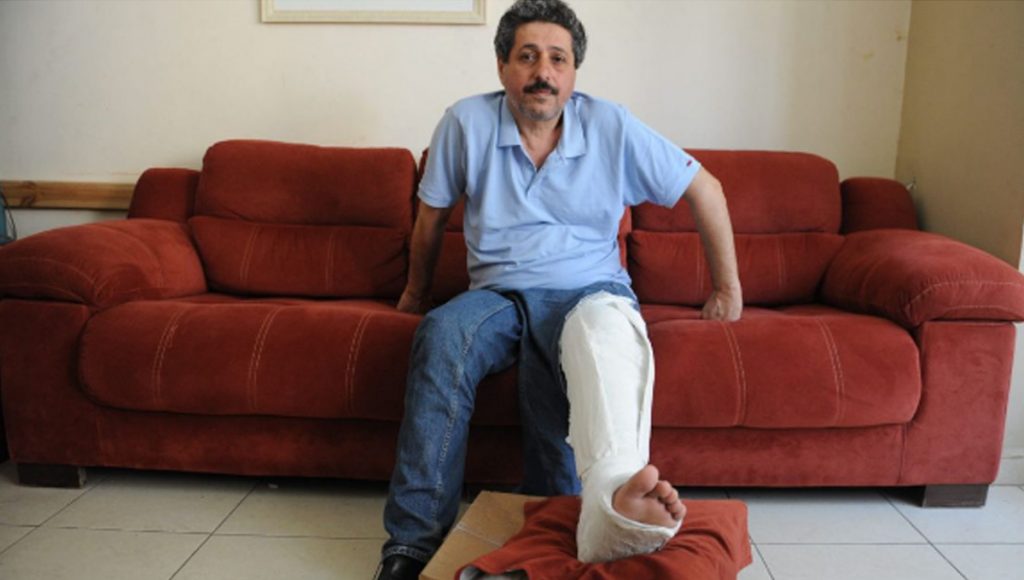 Demonstrations against the Israeli occupation has been continuing not only in Gaza, but in the West Bank and inside Israel. Now, Tuesday was the 51st anniversary of the occupation of Palestine. Today, however, we are going to actually focus in on one such peaceful demonstration in Haifa last month. The demonstration was organized against the killing of unarmed demonstrators by Israeli snipers in Gaza. Now, during this demonstration, the Israeli police charged in with ruthless brutality. The most striking story from this demonstration is that Jafar Farah, the head of Mossawa Center for Equal Rights for Palestinian citizens of Israel, rushed to protect his two sons when he saw that police was getting out of hand and using extraordinary force against the demonstrators. But then he also fell victim to the attacks by Israeli police.

When he tried to leave the scene of the demonstration, the Israeli police stopped him and arrested him. When under arrest, a police officer shattered Jafar Farah’s knee with brutal force. Now, a leaked video shows that even in the hospital, Farah was cuffed to the bed and surrounded by police. Now, Jafar Farah is founder and director of Mossawa Center in Haifa, and Mossawa means equality in Arabic, and Mossawa Center strives for equality for Arab Palestinian citizens in the state of Israel through legal and public advocacy. I thank you so much for joining us today.

JAFAR FARAH: Thanks for inviting me.

SHARMINI PERIES: All right, Jafar, let’s get started. Describe for us exactly why you were protesting, and what happened at that scene of the demonstration a month ago.

JAFAR FARAH: The protest was actually organized by a group of youth. It was against the, the siege around Gaza and the killing of Palestinians in Gaza Strip. You know, like we have almost 100 Palestinians have been shot and killed in Gaza Strip through the last month of demonstrations. So a group of young people organized a demonstration in Haifa. It was Friday evening, 8:00 in the evening. Downtown, really not a crowded area. It’s even closed, the district of the city, which was able, you know, able people to make a demonstration and express themselves. The police in Haifa District decide to shut down the area and to attack the people during the demonstration. They arrested 21 people , to my knowledge, and they attacked almost everybody during this demonstration. Hundreds of young people, and really hundreds of police officers that surrounded them and attacked them for like, almost one hour. And in the end people were arrested and were taken to the police station in Haifa. Seven out of the 21 were hospitalized in that might. One of them was myself. My son, my nephew were hospitalized in different hospitals as a result of different attacks that have been implemented by police officers in the police station, not only during the demonstration.

SHARMINI PERIES: Now, what happened to you, specifically, when you finally got your son and you were leaving the demonstration?

JAFAR FARAH: I have actually, I had actually two sons in that demonstration. One was arrested, and I was asking the other one, [Bassin], who study media and political science at Haifa University, I told them let’s see, go to the police station, and see what’s happening to your brother. On our way to the car we were, I was arrested. [Bassin] was attacked by police officers. I was arrested. And like almost for 20 minutes the police officer arrested, he was looking for a police car. You know, it was a really strange scene. For 20 minutes, me and their other prisoner, other person, were moving around downtown in Haifa and looking for a police car to take us to the police station with two police officers. It was a really strange scene.

In the end, when we came to the police station, I discovered that my son, [name inaudible], 18 years old, he was bleeding. He was attacked, my nephew was full with blood. And when I asked what happened to him, myself was asked by police officer. His name is [Hakam]. He was really brutal. He attacked me. Actually, there were three police officers that this was their job. Everybody else from that district, from the Haifa district, were just looking to see, you know, how these three police officers is actually beating 21 prisoners in the police station. You know, it was clear for me that the chief of police, the leadership of the police in Haifa District, they were aware of what’s happening in the first floor of the police station.

SHARMINI PERIES: Now, are you noticing an increased level of brutality that the police is dispensing on average citizens, and as well as the people protesting? There seems, what we’re seeing as you’re speaking, we’re rolling in some footage here. And what we’re seeing is some very brutal tactics that I have not noticed in the past.

JAFAR FARAH: Yes. You know, like when, when the Israeli army is killing 100 civilians in the border of Gaza with, you know, shooting almost daily women and men in the border of Gaza, brutality is coming also inside Israel day by day. And you know, I have to say, we, the Palestinian community in Israel, are facing escalation and brutality since October 2000. You know, killing Arab citizens have been called culture of lie and violence against the Arab community and the police institution. Already in 2003 it happened, there was investigation committee about police brutality. And then the whole commission declared that there is a culture of lie and violence in the police against Arab citizens.

But let me say that we witnessed in the last few years that this violence and brutality is also escalating when it comes to different marginalized groups also in the Jewish public, you know, or in Israel in general. So you can see how they treat the African immigrants in Tel Aviv area, and also in the Negev area. But you know, if you take a look about the Ethiopian immigrants, Ethiopian Jewish immigrants, you see that already the police killed two European immigrants, Jewish immigrants. Actually, 46 Arab citizens are being killed as a result of police violence in the last 15 years.

So police brutality is escalating. And you know, like in my case, you know, I had a broken leg. In that case, or in many other cases, we witnessed killing Arab citizens and killing even Jewish citizens from marginalized groups like the [inaudible] community as a result of police violence. And then the whole system is actually, is covering these police, police officers that are using violent actions against Arab citizens.

SHARMINI PERIES: Now, would you consider the demonstration in which you were arrested a fairly peaceful protest until the attacks by police started?

JAFAR FARAH: Totally. Totally. There were a few hundred young people. It was in, really, a very small district of the city. You know, nobody was around. It’s Friday, you know, like, it’s Friday evening. This district downtown is usually empty. If the police haven’t been using this brutality against the demonstrators, nobody would hear about this demonstration. It will be another demonstration in the life of people in a democracy. In democracy, usually, people go out. You know, like if we look at the demonstrations that are taking place today in Jordan, for example. And you know, Israel like to market itself and brand itself as the only democracy in the Middle East. I was looking at the demonstrations in Jordan for the last week. It’s social demonstrations in Jordan. I don’t see the level of violence that have been taking place. And let me say, you know, it wasn’t really huge and big demonstrations that evening. It was, like, a few hundred people it was really, Friday evening. And you know, if the police were smart enough not to use these tactics, this violence and brutality, probably nobody would hear about this demonstration.

SHARMINI PERIES: All right. We’re going to take a break there, but we’ll continue our conversation with Jafar Farah in the next segment. I thank you for joining me for now.

Jafar Farrah, director of the Mossawa Center, the Advocacy Center for Arab Citizens in Israel, is a longtime advocate and activist for equal rights for the Arab community. He studied Sociology and Education at Haifa University. Mr. Farrah is the founder of several Arab NGOs and the first Arabic TV station in Israel. Prior to…