Palestinians living in the Gaza Strip continue to demonstrate even though they know they put their lives at risk because life in the "cage" that is Gaza is intolerable, says Ali Abunimah of The Electronic Intifada

Palestinians living in the Gaza Strip continue to demonstrate even though they know they put their lives at risk because life in the "cage" that is Gaza is intolerable, says Ali Abunimah of The Electronic Intifada 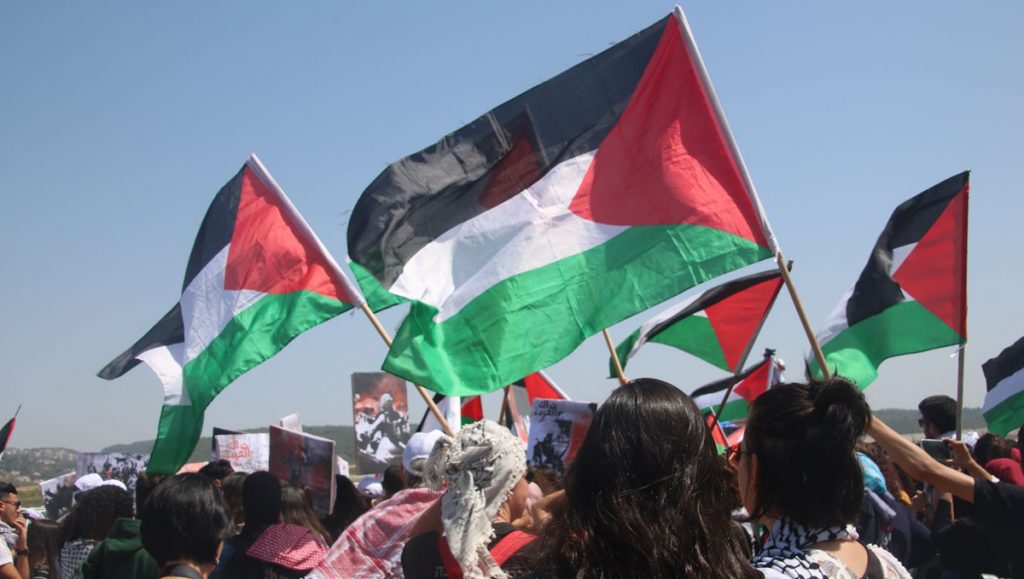 GREG WILPERT: It’s the Real News Network. I’m Greg Wilpert coming to you from Quito, Ecuador. Palestinians in Gaza continued their Great March of Return, organizing mass protests every Friday against the Israeli siege and occupation of the Gaza Strip. On Friday, Israeli forces shot and killed two unarmed demonstrators and wounded over 40 others. One of the demonstrators at the time, Ebtisam Abu Al-Koumsan, spoke about the protest.

GREG WILPERT: Israeli security forces have killed over 37 Palestinians and wounded nearly 1000 so far, over the past three weeks. Joining me to talk about what is going on in Gaza is Ali Abunimah. He’s the co-founder of the award-winning online publication The Electronic Intifada, and author of the book “The Battle for Justice in Palestine.” He joins us now from Texas. Thanks for joining us again, Ali.

ALI ABUNIMAH: Thank you so much. May I just say that, you know, events are moving so fast today that since your intro was written the number of people killed by Israel in Gaza on Friday, April the 20th, which is when we’re speaking, has gone up to four, and more than 700 injured. And among the dead is Mohammed Ayoub, a 15-year-old child who was shot dead by an Israeli sniper. And that makes him the fourth child to be killed by Israeli forces since the Great March of Return rallies began on March 30, on Land Day.

GREG WILPERT: OK. Well, thanks for that update. It’s really quite something. And as these death tolls continue to rise, I mean, as I mentioned in the introduction we’ve reached almost, I think, something like 37 now, probably even more. How are Palestinians not deterred by these killings? I mean, why do they continue to demonstrate, bringing family members, even though they know that Israeli soldiers will use live ammunition against them?

ALI ABUNIMAH: I think the short answer is because they’re human, and they want to live a life of dignity. They don’t want to live caged up in a ghetto, as they have for so many years. They want their right to return home. They want the right just to be treated as human beings, and Israel is denying them that. You have two million people caged in the Gaza Strip, a tiny territory which the U.N. has said will be unlivable by 2020, but is really already unlivable. People cannot go in or out.

Last year, according to the World Health Organization, 54 Palestinians died because Israel would not give them permits to leave the Gaza Strip for medical treatment. Most of them were cancer patients, and a disproportionate number of them women. So what Palestinians are saying is we’re dying anyway, and we choose not to die silently with the silence and complicity of the world.

GREG WILPERT: So what would you say are the protesters trying to achieve with the great march? I mean, do they believe that they can actually break through their fence and march through to their homes in Israel?

GREG WILPERT: I think they’re trying to break through the silence and the complicity of the world. First and foremost, to remind the world that Israel is holding them captive in Gaza, and the whole Palestinian people captive. You know, this week Israel celebrated the 70th anniversary of its so-called independence, and received congratulations from governments all over the world. A number of European and NATO air forces sent warplanes to fly in an air show over Tel Aviv to celebrate this so-called independence, ignoring the fact that millions of Palestinians remain as refugees under military occupation in refugee camps, sealed into the Gaza ghetto. This is nothing to celebrate. Palestinians are saying it’s their independence, our Nakba. Nakba is the Arabic word that Palestinians use to describe the catastrophe of 1948, the ethnic cleansing of Palestine, which is ongoing. It hasn’t stopped. It has never ended, after 70 years.

And so the Great March of Return, these weekly rallies of tens of thousands of people, of families, of children, entirely peaceful marches have been, were started on March 30, Land Day, as Palestinians call it, commemorating the 1976 expropriation of large tracts of Palestinian land in the Galilee. And on that occasion, Israel also killed unarmed demonstrators. So this started on Land Day, and Palestinians are committed to doing this every Friday until May 15, which is Nakba Day, the day Palestinians commemorate that 1948 ethnic cleansing.

And Israel’s response has been absolutely brutal and criminal, to shoot down unarmed protesters in cold blood, with premeditation. Even the International Criminal Court issued an unprecedented public warning to Israel two weeks ago, to Israel’s leaders, saying if you continue doing this you could end up in the International Criminal Court. But I think because of the impunity Israeli leaders have enjoyed for so long, the coddling and rewards they receive from the so-called international community, particularly the United States and the European Union, Israeli leaders feel completely immune and are continuing to carry out these these killings.

And I just want to note that today it’s quite amazing that after the killing of this child today, Mohammed Ayoub, even the top U.N. official in the country, Nikolai Mladenov, expressed his outrage and anger. And this was unusual because he has been one of those U.N. officials that sticks to this line of being, you know, very evenhanded, of blaming both sides, even though there’s no possible equivalence between a military occupier and its victims. But I think it goes to show that, world officials have run out of patience can no longer cover up for Israel. But the question is what’s going to be done. So far we see no action.

I mean, you take the case of Syria. And there were airstrikes within days before there was any hard evidence of the reported chemical attack in Douma, that they didn’t wait for international investigations. The U.S. and its allies went in and bombed. Israel is committing these crimes before the world, and there is zero accountability. Zero.

Turning to a slightly different issue, can you tell us about the solidarity that’s happening with the March of Return? Recently, 20000 internally displaced Palestinian refugees inside of Israel gathered for a march in Atlit, a Palestinian town that was destroyed by Israel and then settled with Jews. What can you tell us about the A tlit march, and are there any other examples of solidarity going on now either in Israel or around the world?

ALI ABUNIMAH: Yes. I mean, the march inside Israel, I mean, we’ve been talking about the Great March of Return in Gaza, and also there are ongoing protests in the West Bank, Gaza and the West Bank having been occupied in 1967. But within the areas of Palestine where Israel was declared in 1948 there are also protests, and that’s to highlight the fact that the way Israel treats Palestinians doesn’t differ that much between the 1967 Occupied Territories and the areas where Israel was established in 1948. So those Palestinians marching are ostensibly Israeli citizens. They’re part of the roughly 1.5 million Palestinians who have Israeli citizenship, but they do not enjoy the rights, the full rights of citizens. And this is to highlight the fact that within Israel, which advertises itself as a democracy, Palestinians are not allowed to return to their land. And even worse, are still being pushed off their land. Like, for example, the village of Umm al-Hiron in the Negev, where Palestinian Bedouins are being forced out of their homes explicitly in order to give that land exclusively to Jewish settlers.

And in terms of international solidarity I think this is where the most hopeful story is, because just in the past day or so Natalie Portman announced that she was canceling going to Israel to receive an award in June because of the recent events. That’s the latest example of a high-profile celebrity recognizing that Israel’s brand is so toxic because of these massacres, because of the ongoing occupation, because of the apartheid system, that they don’t want their name to be associated with it. And that’s been a particular shock to the Israeli leadership, because Natalie Portman is an Israeli-American and has previously been a staunch defender of Israel.

So even she could not stomach this. But we’ve seen a real growth in the Boycott, Divestment, and Sanctions movement around the world. And the main call from Palestinians, I think this is what people around the world need to know, is to escalate that solidarity, to escalate campaigns of boycott, divestment, and sanctions, as was done with apartheid South Africa. Particularly to press for a military embargo on Israel, a two-way military embargo, including an end to police exchanges and police training with Israel.

So another piece of really good news this week was the unanimous decision by the City Council in Durham North Carolina to ban all police exchanges with foreign countries, including Israel. And this is really important, because you see what is happening in Palestine, where Israeli snipers are being told to shoot unarmed protesters in cold blood. And do we want this regime training police forces from the United States, who by the way don’t need any lessons in killing unarmed civilians? However, hundreds of these police exchange visits go on every year. And so one of the ways of solidarity is for people to press their cities and states to ban these visits. No Israeli occupation tactics on U.S. streets.

GREG WILPERT: OK. Well, unfortunately we’re going to have to leave it there for now, but we’ll continue to follow the situation as it develops. I was speaking to Ali Abunimah, executive director of the website Electronic Intifada. Thanks again for having joined us today, Ali.