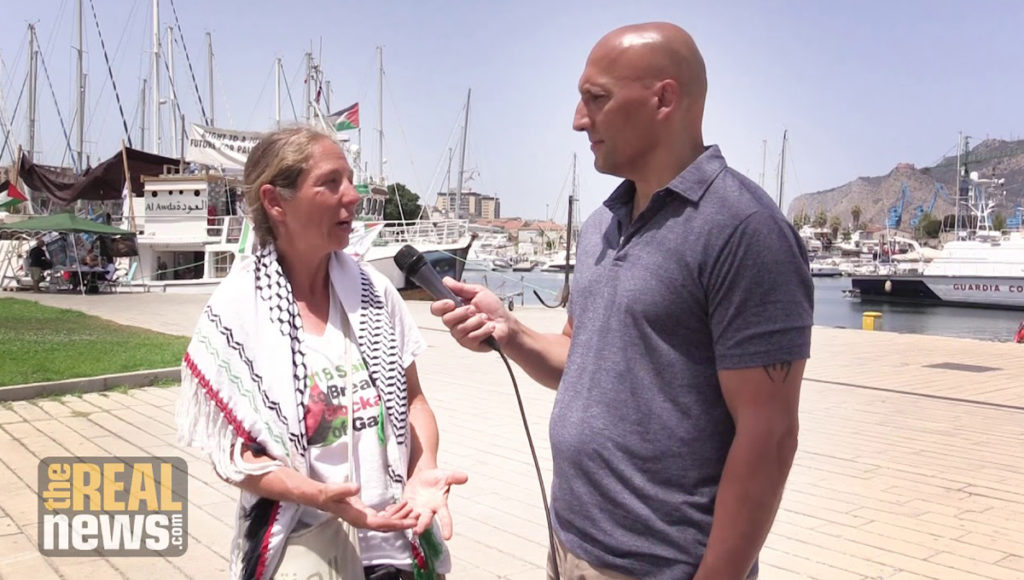 DIMITRI LASCARIS: This is Dimitri Lascaris, reporting for The Real News Network from Palermo, Sicily.

I’m here today with Zohar Regev Chamberlain. She’s an Israeli national and she is the representative for the Spanish campaign for the Freedom Flotilla. Thank you very much for joining us today.

DIMITRI LASCARIS: So I understand you, you were born and raised in a kibbutz. And I’m curious to know about your evolution from, you know, a child growing up on the kibbutz to what you are today, which is a human rights activist for the Palestinian cause. Could you sort of explain that?

ZOHAR REGEV CHAMBERLAIN: Okay. The evolution is, you know, part of me growing up. And I can say that as a child, already I’ve encountered injustice in the treatment of Israelis towards Palestinians. And one of the incidents I remember is my own kibbutz being, very much pushing for a Palestinian family’s house to be demolished quite close to us, and my parents helping those people by bringing them a tent, and you know, just showing solidarity with them, and how my peers on the kibbutz reacted to that. So saying, like, why are you helping these people? They’re, you know, sort of like, coming in towards us. And you know, they are human beings that we’re building on their land. They don’t have a house. There were children my age, and I just felt, you know, this wasn’t right.

So this was, you know, part of my family history, always being a part of the demonstrations against the settlements. I remember in ’82, 1982 after the Sabra and Shatila massacre, part of that demonstration asking, you know, demanding that there will be an investigation, and a lot of similar actions they have participated in. So my family’s always been, like, a dissident family. And it wasn’t accepted, it was a little bit nonconformist. And for me it was natural to grow from that. And as the situation gets worse, become more of an activist, try to do something more.

DIMITRI LASCARIS: And ultimately you emigrated to Spain, where your feelings about the Palestinian cause and the way that Palestinian people were being treated, part of your motivation for leaving the country.

ZOHAR REGEV CHAMBERLAIN: Yes. I left in 2004. And this was after or during the Second Intifada, depending on how you look at it. But you know, I could see that Israelis were sort of, like, claiming their right to go to a cafe while the Palestinians were maybe using violence. But they were just resisting, you know, occupation that’s been going on for too long. And the frustration after the Oslo Accords never actually, were never implemented.

And the feeling that I had was that if you stay in that situation as an Israeli citizen, with all the privileges that a Jew in Israel has, you’re collaborating. You pay taxes, but you also just accept living normally in a situation that shouldn’t be accepted by anyone. So by moving away, I was just trying to keep my own sanity, keep the sensitivity towards the suffering. But actually, it’s, of course I feel as a human being that, you know, this injustice inflicted on the Palestinians is a problem. But as part of, you know, the group that’s oppressing them I feel a double obligation to do something about it, or to, you know, to try out.

I was raised with the, you know, history of the Holocaust, and saying how could the world be silent when we were, you know, being taken to the gas chambers. And I say, you know, you don’t have to go to the gas chambers. It’s enough when you dehumanize somebody that ultimately you’ll get there. So you need to cry out way before. And now when people criticize Israel they’re being blamed, being anti-Semites, or whatever. I just feel that it’s totally hypocritical against the way I was brought up.

ZOHAR REGEV CHAMBERLAIN: I think, first of all, the work we do here as the Freedom Flotilla, direct action to try to challenge the blockade, is all about human rights. But I think the fact that Zionism has neglected to respect the human rights of the indigenous people, you, know, the original residents of Palestine, makes it impossible to create a safe place for Jews, which was the original reason for Zionism. So I think it’s doomed to fail, and I just hope that it wouldn’t cause too much suffering before it ends.

DIMITRI LASCARIS: Lastly, I’d like to talk to you about the country you currently reside in. Spain seems to be, in many ways, on the forefront of the battle for Palestinian rights within the European Union. A number of communities, I believe you’re from Cadiz, and Cadiz is an example of a community that has taken a strong stand in defense of Palestinian rights. I believe it may have actually expressed some support for sanctions, the boycott movement. Valencia, a very large city in Spain, has declared itself an apartheid-free zone, Barcelona. And other cities, of course.

So on a local level there appears to be very strong support, and burgeoning support for the Palestinian cause in Spain. However, the national government doesn’t seem to be particularly interested in taking concrete measures to protect the rights of the Palestinian people. How do you explain that disparity between the grassroots support and the policies of the national government?

ZOHAR REGEV CHAMBERLAIN: I don’t think Spain is so much different to other countries in this respect. I think Western democracies don’t really listen to their people. I think people in Spain generally support the Palestinian cause, or at least traditionally supported. I think with time Israeli propaganda has filtered. And it’s true that we have a big network of local government and civil society groups that support human rights, defend human rights through the BDS movement. And there’s a whole network of Israeli apartheid-free zones in Spain.

But it’s still to be seen whether they’ll be able to put pressure on the central government to actually sanction Israel, because Israel is not held accountable. If they don’t feel the consequences of their policies. I don’t think there will be an end to it. And I think it needs to come from international pressure. I don’t believe that Israeli society itself can bring this change from within.

DIMITRI LASCARIS: I’d like to thank you very much, Zohar, for joining us today.

DIMITRI LASCARIS: And this is Dimitri Lascaris, reporting for The Real News from Palermo, Sicily.